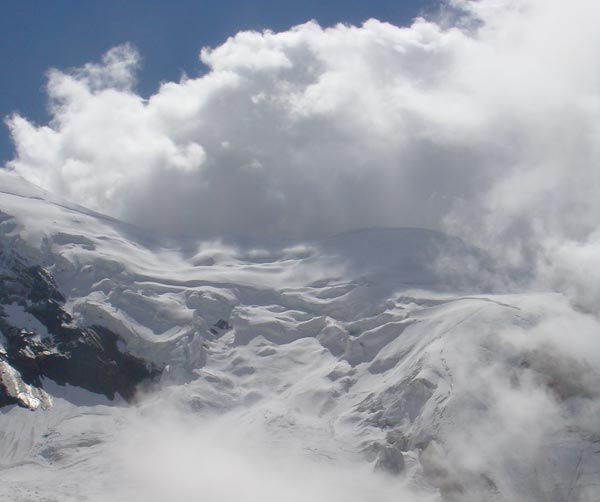 For some reason I’ve dreamt of climbing every night the past week. Mostly I’m on a tough mixed terrain ridge really testing me to my limits. In fact so testing I tend to wake up with the physical effort of clambering whilst in bed. It was amusing the first night, but 5 days on it’s getting a bit much really. It doesn’t compare with Michael on the last night of our climbing course. I woke at about 5 in the morning to the sound of him trying to put on his waterproofs in his bed after 10 minutes of struggling he threw them on the floor in a huff. Not that he has any recollection of any of this, a combination of an obsession with climbing and far too much alcohol in one night. If I stuck to the theme of odd activities in the night there’s another story from the Moiry hut, but it’s not pleasant so if you want to know you’ll need to ask in person…

Ok, I’m struggling with content for the blog, after a week of heavy posting when I’m just back from holiday things are slowing up. I’m starting to get used to the unemployed lifestyle and the lack of routine in my life right now. A big downside to this is that the days tend to blend into one and they don’t make for very interesting blog posts. It’s tough enough as it is if you’re not interested in endurance training as there’s not much else to read about here.

On that note the weekend continued in the same vein as the week with more hours spent training. I’m pretty certain now that weekend drivers are actually better than weekday afternoon drivers, I definitely have far more close calls in the week. Plenty more hours spent on the bike leading to over 500km of riding in my first week back. Quite a lot, but at times there’s not much else to do, perhaps the secret cause of over training is boredom! After all it can be a case of go and train or watch a repeat of Ugly Betty on Channel 4.

I have to apologise for being a little hypocritical too. I went for a long ride on Saturday and passed another cyclist without saying a word. I didn’t mean to be that rude, not least because they said hello to me. If I’m making excuses I was planning to ask them how far it was to Wantage when I saw a sign with the distance on then as I went past them by the time my brain caught up they were gone. Pretty lame! Karma got it’s own back when I was taking an easier ride the next day, suffering a bit in the legs and a guy came blasting past me. Doesn’t often happen and if I’m making excuses again then I was eating at the time!

He did at least acknowledge me whereas whilst out yesterday I was apparently persona non grata. It was a Bank holiday here in the UK, which doesn’t mean much to me now, but for those who work is a bonus day off. There were a fair few people who clearly chose to take the opportunity for an extra bike ride. Not one road cyclist I saw acknowledged me, I don’t expect it, but that’s a pretty poor hit rate. Got me thinking about cyclist snobbery and whether the problem was I had quite a large backpack on for my trip that day. The presence of a backpack transformed me from someone cycling for cycling’s sake into someone cycling to get somewhere. Any cyclist knows that the former trumps the latter! Personally I’m for more friendliness on the road, the random encounters and occasional chats whilst on the wheel are one of the pleasures of cycling. It’s not all about the pain of intervals.

Whilst training volume has been high, I’ve not really felt in form yet. Running seems to be fine, but cycling and swimming are taking their time. However this may all be a matter of motivation as I discovered yesterday evening. I can hammer out a pretty hard ride with the right motivation. If you want to give yourself a good push I highly recommend racing the sunset. Knowing you have a limited time before it’s going to get dark and a bit more dangerous can help you knock out that Ironman or above pace for 90+ minutes. I don’t recommend getting caught out on the road in the dark though, things become quite tense. On the bright side my legs ca put the work in if they need to, just want them to do it next Sunday in Almere.

Filling in the Gaps

Will Ride for Coffee