Almost 85,000 athletes entered an Ironman in 2019. Here I look at those top level numbers - how many enter and participate in Ironman - and how that has changed over the last decade. 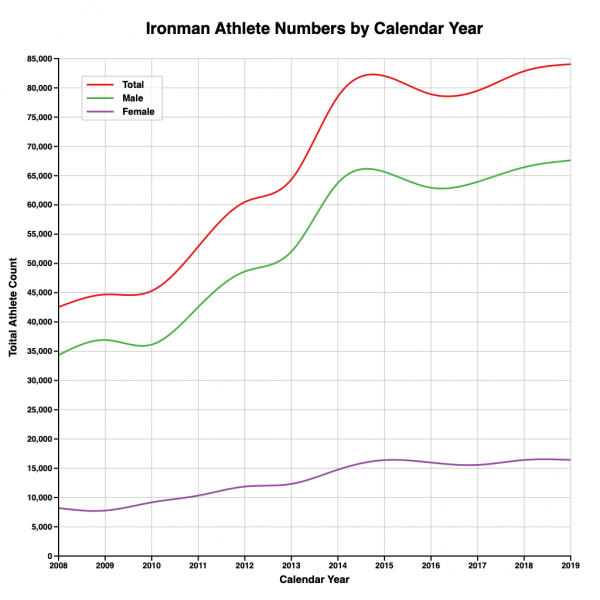 The number of entrants to Ironman events has doubled over the last decade. From around 42,000 in 2008 to roughly 84,000 entrants in 2019. As the chart above shows the majority of this increase occurred between 2008 and 2014. Since then growth has become limited. The chart also shows that the majority of this growth has come from increases in the number of male participants. You can review the gender demographics in more detail here. 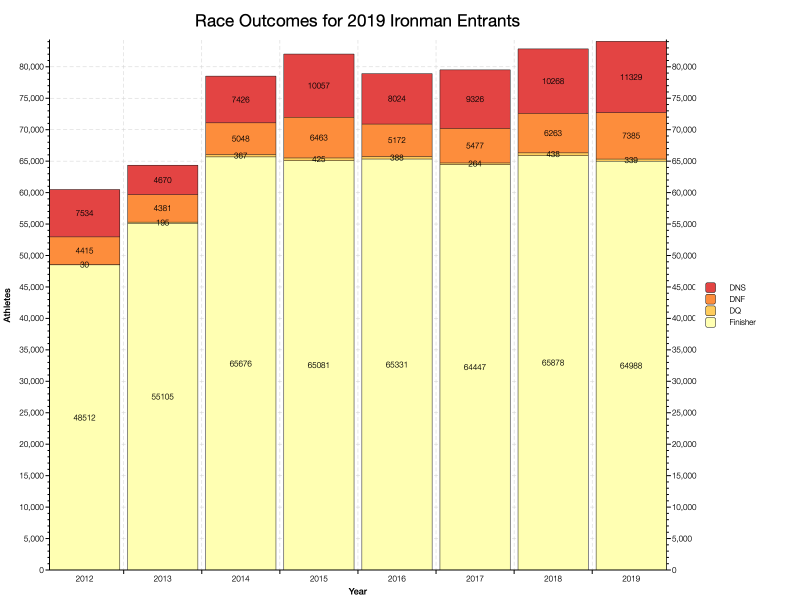 Although there were 84,000 Ironman entrants in 2019 only 65,000 of them finished their chosen events. About 11,000 didn't make it to the start line and a further 7,000 didn't make it to the finish line. A tiny 0.004% of entrants were disqualified in the course of racing in 2019. As the chart above shows these numbers are not entirely inconsistent with recent years of racing although they do represent the high end of DNS and DNF numbers. In the case of DNS numbers we may be seeing the affect of Ironman's transfer policy over the last couple of years. 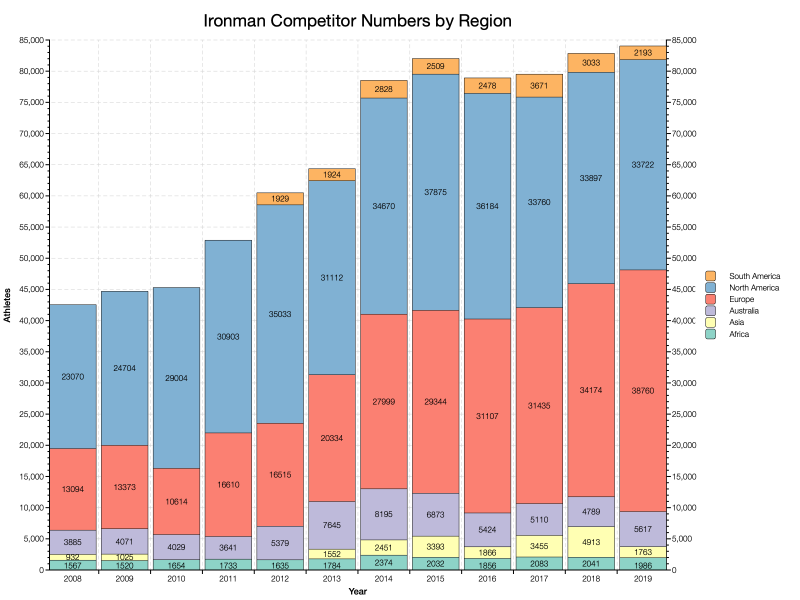 Considering where these athletes have raced it's not surprising that the vast majority compete in North America and Europe given the number of races on offer. Asia saw a fall off in entrants in part due to cancelled races that have not been counted towards these statistics. In recent years competition in Europe appears to have been the biggest growth area by numbers. 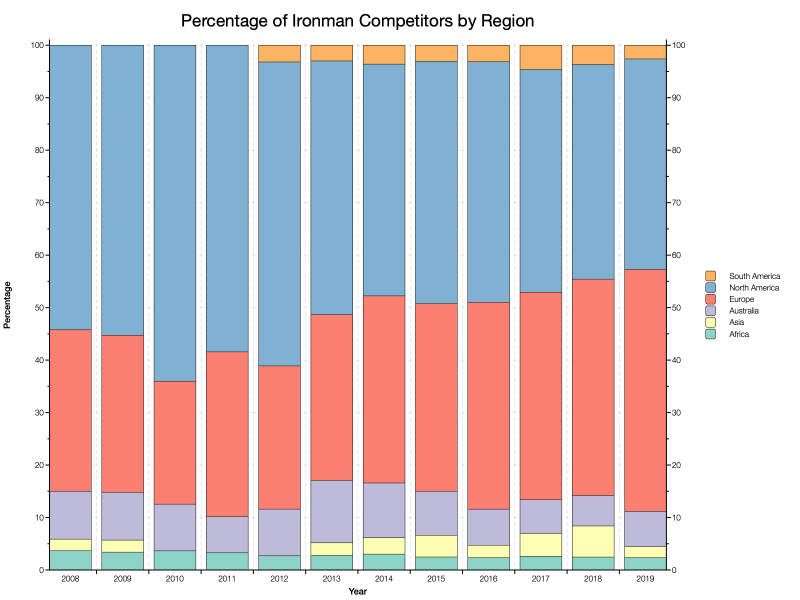 Considering the same data as a percentage of entrants highlights how there was a shift between 2012 and 2014 as Ironman expanded outside of the US. As above that shift is primarily towards Europe while other regions have remained more consistent or shrunk a little in proportion to the growing European race base. 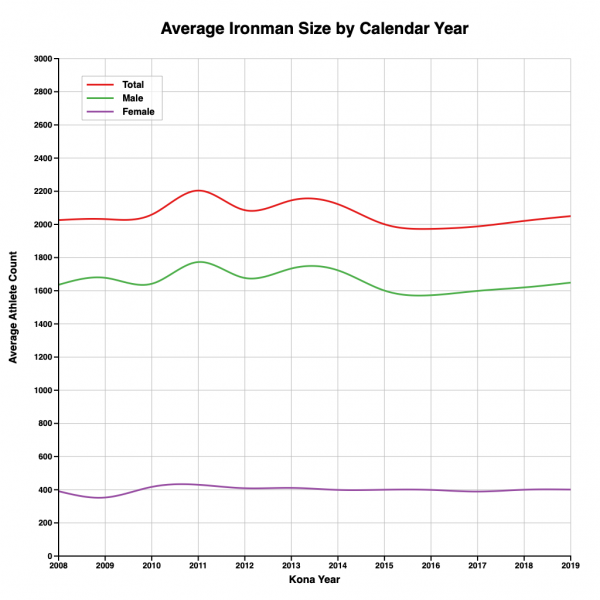 While the number of entrants to Ironman has grown since 2008, the average size of individual races hasn't changed too much. Numbers have sat in the 2,000-2,100 region throughout this period. They peaked between 2011 and 2014, but as entry numbers have plateaued race size has dropped back a little. 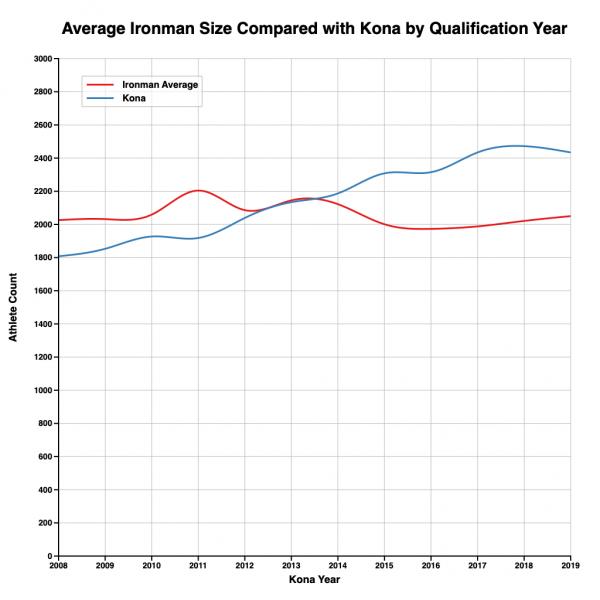 You can continue exploring 2019 Ironman Demographics below with more detail by gender, age group and nationality of competitors.