After 6 months of training my A race is finally approaching and the taper has begun. Physically and mentally I need it, I’m pretty much done. I think it’s just 10 days now to Ironman Switzerland so my primary objective is to shed the fatigue and get myself fresh for the race. I have to admit that right now my legs feel tight and heavy and I’m tired. I sleep heavily every night, but always feel I could use a little bit more. My weight is higher than I planed to race at, but I was told it’s not unusual after Epic Camp. If Switzerland was tomorrow I would not be expecting a great day!

The taper plan is pretty simple it includes the odd rest day, but otherwise similar training to usual just at a lower volume. Get as much sleep as I can every night and avoid eating too much when I’m not burning the calories like usual. Other than that I just have to trust in the training I’ve done up till now. My training diary says I’ve worked harder and better than I have in previous years. After a good session I feel I’m going stronger on the bike and run than I was prior to either Ironman Austria or Western Australia last year. Maintaining confidence in this and carrying that into the race is going to be my challenge.

There’s plenty of room to improve in all 3 disciplines (and the transitions between them), but if I was to pick a key weakness coming into this race it’s my mental preparation. I am sure I wasn’t this bad last year, but I feel so much more uncertain of how things will go. I’ve raced less this year than last and perhaps that’s a factor, by the time I reached Austria last year it was just another (longer) race. That can’t explain it all though what races I’ve done so far have gone well in general, but performance there or in training isn’t translating to confidence. I wouldn’t say I’m worried about the event, I’m quite certain it’ll be no problem to finish, I’d go so far as to say I’m pretty happy I can go sub-10 again. Stepping up my game and aiming for the Hawaii slot means sub-9:30 though and possibly faster still. The truth is my concern comes from a doubt that I belong that high up the results table, in the back of my mind I’m not a real athlete and I shouldn’t be up there.

To attempt to combat this I’ve instigated a few ground rules to get me to race day. Key amongst them is avoiding triathletes, no offence to them, but right now I don’t need to hear what they have to say. A ban on various websites and blogs is shielding me from the diverse variety of rubbish often said by triathletes (again no offence). I just need to focus on what I’m going to do and don’t need to start raising doubts in my mind because it’s not what others would do. I have my plan, I know I can go under 9:50 last year and I know I’m better trained this year. I just have to convince myself now that it logically follows that I’ll get a new PB in my race.

Putting the worries aside, my race plan is simple. For the swim, position myself near the front go out hard and sit in a good group for most of the journey. It’s fair to say most of my good swims have involved some successful drafting. For the bike I’m going on heart rate and perceived effort as I’ll not have my power meter, the aim is a solid bike split not pushing things too hard, but keeping at the upper end of my intended effort. Then for the run I’ll be using the compression socks, we’ll see if that helps, but I’m aiming for a controlled effort like in Oz, but without holding back quite so much. I looked up pacing for 3 hour to 3:20 marathons so I can monitor where I am throughout the race. In contrast to my expectations going into Austria I now expect the run to be the hard work. 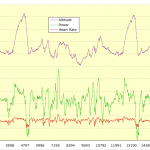 An Unconventional Approach to Tapering