☰
Home > Back Down to Earth

Back Down to Earth

I’m back home after 2 weeks of climbing and mountaineering, that’s my holiday done so I’ll be back into training from tomorrow. It’s a weird holiday in that it’s the first time I’ve come back and not had a job to return to, that’s still got to sink in. 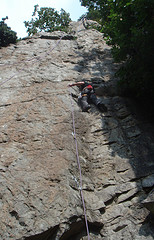 I’ve climbed more in the last week than I have in the entire year and that includes my first try at lead climbing. It was all good fun and a lot of work and at times a little nerve wracking. I learnt a lot in the Alps, both in terms of skills and new ways to test my fitness. I’ve not swum in the last 2 weeks, nor run or biked. On the other hand I was spending at least 4 or 5 hours a day hiking or climbing in the mountains, often at altitude, so I don’t think fitness will really have declined.

The first week out in Switzerland was spent learning the basics of Alpinism on the ISM Summit and Skills 4000m course. Lots was covered – a bit of climbing, lots of rope work, glacier travel, crampon use and basic rescue techniques. The group that week was quite large – 8 of us plus our 2 guides, but fortunately we all got along really well. We were pretty fortunate to have a large group that worked so well together, in general the larger the group the more likely they’ll be problems. Certainly the same course the next week had one person who really didn’t enjoy things. The training included summits of two peaks the smaller Pigne de la Le and the 4000m Weissmeis to finish the week. Both very enjoyable with the Weissmeis providing a bit more challenge and a little more exposure.

Hard to pick highlights from the first week, obviously both summits. I’ll not forget being dragged across a snow field by one of the guides as I tried to practice self-arrest techniques. He definitely enjoyed that! Nor taking a dip in the glacial off flow from the Moiry glacier, seriously cold water, but after 3 days without a shower very refreshing. Hopefully for us all the photo of my bare arse will never make it to the internet. Thanks to Chris for taking that one, thought the fact it’s his kids favourite is a little worrying…

For the second week I’d signed up for the Technical Alpinism course so had already committed to pushing myself further in the mountains. I was pretty pleased to find it was just me and Michael (another guy from the first course) for this week, thanks to someone deciding to cancel. With only 2 of us and one guide the schedule became much more flexible. Unfortunately the weather for the week was much less obliging and limited the amount of time we spent on snow and ice. However the result was I spent time climbing rock in 3 different countries over 3 days!

We spent the first 2 days of the week in Switzerland staying around Leysin still. I started the week with my first large mutlipitch climb, the Miroir d’Argentine. We climbed the direct route up the face, about 500m of elevation and 15 pitches. I’ve a long way to go with climbing so this route was at times testing, but I relaxed into it a lot more once I was a good few pitches in. It took around 5 hours from bottom to top and was fuelled by only 3 Special K bars! It’s remarkable how appetite vanishes whilst you’re in the mountains, there’s too much else on to notice. We followed this big climb with a second multipitch effort up a local pillar, rain however called things off sort of the top and I got to have a go at my first multiple abseil descent. Abing off things before the top became a bit of a theme for the week thanks to the weather, but I think we were getting fairly slick at it by the end. 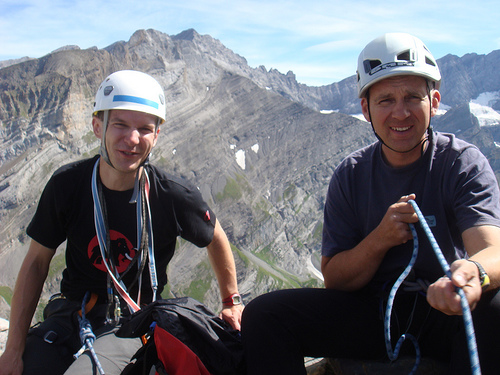 With bad weather moving into the Alps, we headed off to the Aosta valley in Italy to find some sunshine. It was pretty amazing to go from rain, fog and clouds on the Swiss side and descend into sun in the Italian valley. On the climbing side it was more rock and also my first lead, but food really was the highlight of this day. We ended up in a little B&B nearby and ate at a local restaurant. The volume and quality of food was fantastic, all fresh local produce in a simple daily menu letting them focus on the meal. I doubt they see many foreign visitors there, but the owners spoke excellent English and took great care of us. The meal was amazing, though the next few days we questioned the wisdom of opting for raw beef as the first course.

After another multipitch climb in Italy which we actually summited before abing off the top we drove over to our guide Twid’s place near Chamonix. Again the advantage of such a small group was the mobility and the fact our guide could put us up at his home! At times it felt more like we were hanging out with a group of guides than on a course. We always knew we were with a guide on the climbs though as Twid made sure we kept the pace up and didn’t mess about. Eliminating faffing was a major priority of everyday. I have a long was to go to achieve the efficiency of a guide; their ability to get equipment off your harness without you noticing verges on sleight of hand.

So finally we went for some ice climbing up the Cherie Couloir in the Aiguille Du Midi. Thursday we were up at 5:15 for breakfast and to head off and catch the first lift of the day. It was quite luxurious not to be staying in huts and to have our only Alpine start being after 5am. Winds were high once we got there and we started on the ice climb, about 5 pitches up though Twid decided it was time to Ab off as winds picked up and the next pitch had poorer anchors. So once again we didn’t quite make the top but did get our first real ice climbing. We’d planned to follow the climb with the Cosmique Ridge up to the cable car, but conditions and poor reactions to something that had been eaten aborted that. A short ridge climb into the Cosmique hut was opted for instead, not as long but quite enjoyable, with one very long leg stretch in the middle of it.

The final day had an even more leisurely start, with weather supposedly improving in the day and a lift that started later we could lie in till 7. The plan was another small ridge climb, but this time with a more challenging climbing and mixed conditions. We shot up the lift and got on the glacier it was a trickier crossing than we’d experienced with a bergshrund to cautiously cross. With a bit of care there were no issues and we were soon onto the ridge. Unlike previous ridge climbs, there was actual climbing involved not just a scramble. Four pitches up and there was a boom of thunder; that was it, time to get off the mountain. We abed straight off onto the glacier, roped up and carefully made our way back and down the lift. As we descended the snow we’d experienced up top thawed into rain. And that was it for mountaineering for the week. A stop for coffee, see Britain get a gold on the track whilst I drank it and then back to Leysin.

It was a great trip and learning experience and it leaves me with a focus outside of triathlon. I’m not sure how it will all fit in really, I need to work on my climbing if I want to get further with Alpinism. My fitness is not an issue, I had no problem regularly going up above 3000m and climbing. How and where I fit in climbing with my other training remains to be seen, I have some more contacts to try in Oz though. I also have a rough goal to get my climbing together and when I’m back in Europe next year a trip to the alps will be on the cards. Not sure of the objective yet, but something to challenge me a little more.

There are a lot of interesting and unusual ways to push your fitness and endurance out there and they don’t all involve trying to cross a finishing line before everyone else. My primary goal is still to cross that Ironman finish line ahead of more people, but I encountered a mindset that focussed more on testing your limits in a far broader way. Building up skills, fitness and mental focus and using it to tae on challenges that interest you, whether it’s summiting a mountain or completing a race. I find it inspiring and points to further places to go in the future. Everything I do over the coming year needs to address these 3 things and help enable me to take on bigger challenges.

This post is far too long, I’ll write about plans whilst I’m still in the UK, mental focus, training and at some point, I will write about Columbo in later posts…