☰
Home > Into the Wild 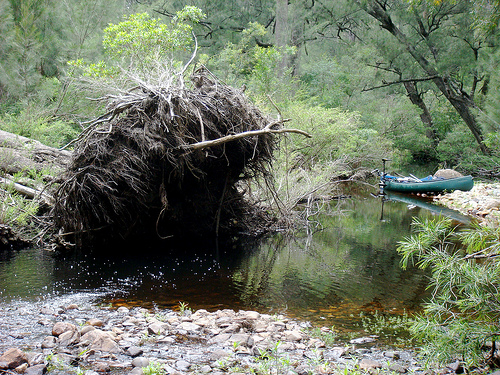 I have ambitious plans to complete this in under 30 minutes. No offence, now that more than 2 people seem to be reading this I am trying to be consistent and even interesting. However today is the last day of the 2 weeks of ‘recovery’. A term here meaning doing very little training and a lot of the stuff you haven’t done in ages whilst gaining a bit of weight. I want to get an early night as tomorrow it’s back to getting up first thing and training. I still have more to write up about the training plans for the next year, but today something about my camping trip.

Let’s start with the thanks. Part of the reason to head down to Sydney was to meet up with my friend Asher. Somehow we’d managed to miss each other for something like a year. To be fair it’s probably my fault being anal about my training schedule making it hard to arrange anything! Asher had suggested I come along on his planned camping trip and I’m glad I did, the bush beats the city every time. Biggest thanks have to go to Iwan and Baz though who acted as expert guides and hosts over the weekend. I have now learnt a little bit about canoeing and a little bit about fishing. Far from an expert, but I gave it a go!

It was a relatively short trip as the flights I’d booked didn’t allow me to stay a full weekend. I have to admit I wish I’d had Monday flights now. Fortunately Baz needed to head back home on Saturday too so despite my awkward timings I’d be able to return to civilisation. We headed out to Yalwal on Friday morning. It’s roughly a 3 hour drive south of Sydney though we took the time to stop off for lunch on route. Eating formed a major part of the weekend. Fortunately by now I’d decided not to worry and to enjoy the food, I’ll get back to race shape soon enough! The overall result was I had one large breakfast at my hotel (buffet it’s rude not to eat all you can), a second smaller breakfast when I met the other guys and then an early, large lunch on route to the camp site. This doesn’t mention the bag of crisps we opened in the car either… 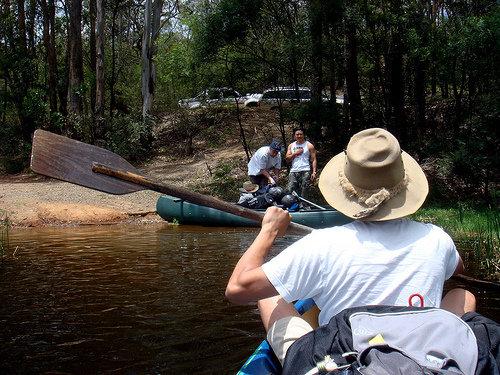 We arrived at the dam in Yalwal sometime around midday. Unloaded the cars and put everything into our canoes. I’ve never actually canoed before. To be honest I have this weird discomfort in boats. It’s not that I can’t easily swim to safety, obviously I could. There’s something about the idea of falling in and having all my stuff get wet that makes me uneasy! Unsettled nerves apart a combination of a reasonable amount of power and no technique saw Baz and my canoe zig-zag all the way to the campsite. It was probably fortunate it was only a few hundred metres upstream. I think I’d paddled more like a kilometre by the time we landed though. The truth is you could have walked to where we were camped, but what would be the fun in that?

After setting up camp and a quick swim in the surprisingly warm waters we headed out to fish. I was a little better in the canoe though my technique was great at soaking me through. The waterproof I’d packed in case of rain proved handy here! Fishing was entirely new to me and it took a while for me to cast even half respectably. I think I spent half the first trip unravelling bird’s nests from my fishing line! Fortunately Iwan was particularly lucky and managed to catch us enough to eat that evening. To be fair Asher also caught a smaller fish and kept it so he could eat his catch. Me and Baz however had no luck and came home empty handed. 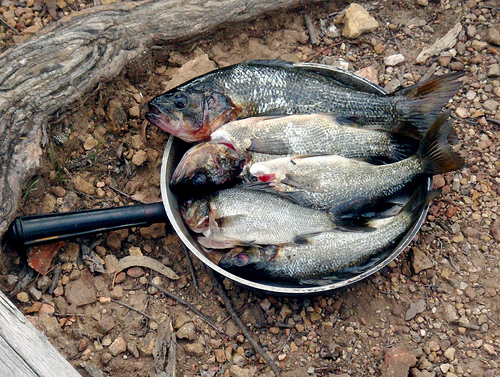 Dinner was 5 freshly caught Bass and some plain rice all cooked over a wood fire carefully built by Asher. Such keenness to build a fire and burn wood would be unsettling outside of a campsite. The food was simple, but delicious. Probably the freshest fish I’d ever eaten. After dinner we chatted on in the dark. I knew Asher long before I thought that training was a worthwhile way to spend your time so conversation turned to some of my interests of the past. It was curious to revisit some of the topics of old and to find myself moving from my impressions of the Gold Coast to the short stories of J. G. Ballard. His early Science Fiction has some relevance to the way I feel about the place. They also made a marked impression on me as I often find myself reminiscing on their themes. There is something strange in my decision to live somewhere which I think embodies some of those themes. Enough of that as this is supposed to be about the trip.

I slept surprisingly well given the variety of large rocks underneath the tent and my sleeping bag. Not my best night’s sleep, but really not too bad given there was a rock sticking in my kidneys most of the night. Early morning saw Iwan and Baz head out to see if they could catch some breakfast whilst Asher and I had a lay in! We got up on their return having had to do nothing for our breakfast! A combination of tinned fish, bread, noodles and some fresh fish that may not sound all that special but tasted great. Perhaps more importantly some decent coffee made in the Billy Can. 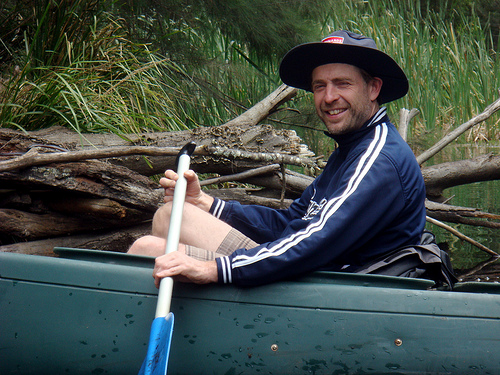 Saturday saw us head out and paddle upstream to the source of the Creek. The first half we paused for some fishing and this time Baz and I had the luck. He caught a Bass worth eating and I at least caught on even if we did throw it back (I will upload photographic proof of this in the future). With something for lunch we headed on up till the Creek became too shallow. On route I spotted a snake basking in the sun, despite warnings about the dire venoms snakes here possess Asher was keen to get up close. Having looked it up since being black with a red belly means it probably wasn’t too dangerous actually. When we reached the end of the creek it was time for another fire and lunch. Fresh fish and bread again, delicious.

That was pretty much it. Baz and I powered our canoe home and started getting ready for our return trip. A final fire and cup of tea, a bit of packing and then back to the car. We opted for the drier luxury of the electric motor to get us back. Well, until 100m to go when it ran out of juice and we carefully paddled to shore so as not to soak the relatively clean clothing (everything smelt like a bonfire by now anyway). The drive home was interrupted by a couple of massive pizzas for dinner. I figured if I was going to enjoy all the foods that were off the menu once I’m training I was going to enjoy them properly.

I had a great weekend away and a complete break from my current lifestyle. It was good fun and I’m glad I spent the time down there. I continued the indulgence of the previous week safe in the knowledge that it all stops now. From tomorrow onwards it’s serious training. Back to the proper hours, the careful diet and a plan to get me my Hawaii ticket in April. Next time I blog it’ll be more on the training plans.