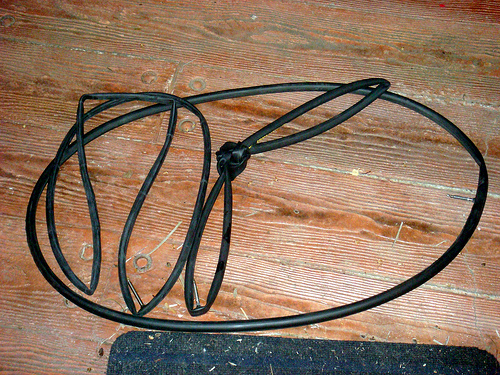 It would be amusing if I wasn’t the victim, but on my three rides so far in 2009 I have punctured every time! I’m getting through tubes at a rate and they’re not cheap here either! Maybe I’m being sent a message to give my bike a good clean up and service it kind of needs it. Whatever the reason I can’t afford to keep puncturing like this!

Aside from the road side repair focus to my training everything is going well. The cycling is feeling pretty strong, the running is getting there and the swimming is coming along. Then there’s the yoga too. Three sessions in now and I’m getting a bit better at it (well so the teacher said anyway). That said I came out of the second session pretty sore! I know it’s not supposed to be competitive, but you have to push yourself. It’ll be a while before I see if it benefits the rest of my training much. At the least I’m getting a decent core session out of it, a bit of stretching and a bit of relaxation too.

In the pool I’m moving away from the extreme drill focus and starting to bring in a bit more structure to the sessions. Adapting to the swim corrections whilst working at speed is a work in progress. I am certainly no slower than before, but possibly only marginally faster. Faster is faster though and there’s a few months of work yet before the next race. I have also learnt the value of paddles – specifically for me my left forearm is quite weak and fatigues quickly whilst trying to maintain a good wrist position. Regular sessions with paddles to develop forearm strength are on the cards now.

Out on the bike and my riding seems to be in good shape. Certainly the power readings are looking good. I’m suffering from some soreness in my hands on the bars though and have no idea why, it’s not like the set-up has changed. A couple of weeks off definitely left me with an adaptation week where the contact points needed to toughen up a bit! I also seemed to forget how rough some of the roads round here are too. Still when I hear about the cold and ice back home I have to appreciate the opportunity to ride outside everyday. Getting in plenty of hours a week already and with Pete around to help keep me honest on some sessions. The benefit of a training partner is a bit more push on the rides. Today’s trip out along Tally Valley was certainly a lot harder than I thought I could go.

With the exception of one ride this week I have done a short brick run every time too. It seems to be working well for me so next week I double the length of the run! Stand-alone running is going well in the sense that I’m back to a respectable volume already. That said there’s been a few twinges at the longer distances. I’m beginning to wonder if my trainers are reaching the end of their life span. I would guess they’re getting close.

Highlight of the running this week was a hill session around Burleigh Heads. The headland is a small nature reserve with a series of paths running through it. It also apparently contains at least one species of venomous snake (and this being Australia we’re talking nasty venom here). The main challenge though is the steepness of some of these paths, well and dodging round the walkers. A set of 3 loops with near vomit inducing fast uphills followed by a pleasant downhill recovery finished my training on Friday. The downhills had a sting in their tail though as my quads have been a little sore since!

I’ve only a couple more weeks of training and I’m off to New Zealand. I’ll train for a week out there and then have an easier week ready for Epic Camp. Really looking forward to the Camp environment and seeing just how far I can push with my new levels of fitness. It’ll also be good to catch up with a few friends, make some new ones and probably end up with further plans for the year ahead!

The next post will be on the entirely different subject of sharks. Simply because they’re cropping up in my google news feed a lot right now (shark attack fatal) and they fascinate me.