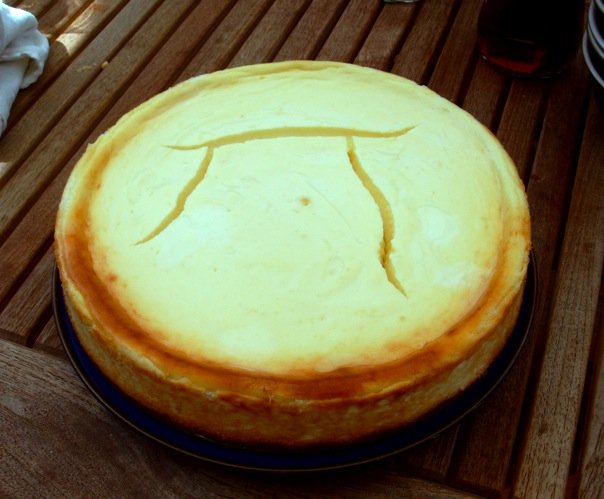 After weeks of dedicated focus on diet and weight loss my birthday marked a day of excess. For once I’d say to hell with portion control and hello to cake and sugars! I have to admit I was looking forward to it quite a bit, particularly as I planned to make the above New York Baked Cheesecake. An entirely new venture for me. My favourite dessert, the last thing I wanted was for it to be a let down. I’m pleased to say it was a big success and despite its size vanished that day (in no small part thanks to me!)

Before all that I’ll pick up from the events on Saturday. As I mentioned on Twitter the big picture won out and I didn’t run. This gave me a total of 28 days of running at least 30 minutes per day. A pretty good effort and frustratingly close to my target. However I am pleased that I didn’t allow a personal challenge to get in the way of the smart thing to do.

In fact I was smart enough not to bike or run on Sunday and to completely rest on my birthday. Sure it didn’t make my training graphs look as impressive, but it was the right thing to do.

Sunday wasn’t easy by any means. I started the day with a trip to the lake. I had a big plan in mind. Ten laps of the lake for an 8km open water swim. Pretty epic and excessive, certainly further than I’d ever gone in a single session. A little bit of messing about before hand delayed my start in the lake and as things went I had to get out at 7km. That’s still excessive! So I allowed myself the treat of some chocolate brownies shared with my mates at the lake (thanks to mum for making them!)

With 2 hours of swimming in my arms I headed home for the next bout of excessive behaviour. Something I think far more people will appreciate. Excessive eating. The weather was beautiful and it was perfect for the planned barbecue. During the course of lunch I would estimate I consumed roughly 1.5kg of meat. Yep, that is a hell of a lot of meat. Technically I was still being pretty Paleo at this point. The consumption of cake that followed throughout the rest of the day was definitely off the charts. I would guess I consumed a whole fifth of that cheesecake, a good portion of fruit cake, some more brownies and a bit of a ridiculously sweet birthday cake!

You should have seen the scales the next day! Let’s just say I put one heavily anomalous data point into my weight chart! Still two days later and we’re back to normal and back to losing weight. I’ll be blogging about my success with Paleo and lower carb eating in the future though.

Excess consumption has its place, but once done it’s best to get things back on track quickly. So come Monday and my actual birthday it’s back to being a modern day Paleo man. I ate pretty lightly that day, especially with zero training taking place. I relaxed in the sun and tended to the sore knee which was showing good signs of being much recovered. All in all a very pleasant and relaxing time. The first total rest day in a month and much needed as I realised the last four weeks had seen almost 120 hours of training! My body was and to an extent still is excessively tired. It’s a good job my aim is to be at a peak for Ironman UK and not Roth.

There is one final bout of excess before things return to more normal parameters. My failure to hit 8km in the water frustrated me so Tuesday I went to the lake earlier. I got in and set off feeling a little warmer than I’d like with the fantastic weather we’re having. I stuck at it for the 10 laps to hit 8km! Probably more when you allow for course deviations that creep in. I was pretty satisfied with that!

Once I got home it was straight out on the bike to meet Steven for an easy ride. It was relatively easy thanks to a couple of coffee stops, but he’s riding pretty solidly right now so it wasn’t a cruise. It was good to catch up as always and chew over a few issues. Discuss the benefits of massive over-distance training like my swim. Pleasingly my knee was holding up well. I was aware that something had been wrong with it as I rode, but it wasn’t getting any worse.

The final test of the day was the SAAB Salomon Forest Trail 10K I’d entered as race number 4 in my mini-series. Any thoughts of racing were gone instead I planned a 10km training run with a goody bag at the end! So lining up at the start I placed myself well back mostly concerned with my knee. The horn sounded and off we went at a leisurely pace.

The first 4km I was barely working. I kept to 5 minute kilometres so a real jog! The knee was feeling fine though. Somewhere around that 4K mark I picked things up. I was loving every minute of the trail run just like the week before. This was far too much fun for a race! My run form felt great, really stable above the waist my legs moving effortlessly below me (it wasn’t that hard a pace). I just kept on building towards the end crossing the line in 45 minutes. No kind of record and a little disappointed that if 100% confident of my knee I could have raced well.

Even so it was a fantastic evening. Thoroughly enjoyable and once again I found running trails an addictive experience. I want more of it! Enough that I’ve entered the Rivington Trail Half Marathon race in September! I just wish I had easy access to trails right here on my doorstep. Running the roads gets repetitive and boring, but the forests never seem to.

Here we are. The knee seems to be fine and I’m back into training. I’ve a rough idea of the next few days plans and what my focus will be. I want to try and get some good sessions in on the bike if I can, I certainly feel I need them. Swim and run feel great. I’m enjoying open water swimming so much lately and have plans to go longer still! Running is comfortable and I’m starting to gain confidence for my races. Cycling seems to come and go though, I want some consistent work in there for the next few days.

And then it will be Roth.