I started to touch on this in yesterday’s post. Today I’m going over the details of my year so far and what still lies ahead.

The plan for the year is built around a heavy race load with the knowledge that without work I have plenty of time to rest and recover. In the future work will be an issue and I can assure you that I’ll reduce my training and racing to compensate. This is very much a case of striking whilst the iron is hot!

Gordo has referred to the benefits of taking a year out for training as an age grouper and also the costs. He definitely believes it’s only sustainable for a period of time before you need to take a break. My plans for next year have some new challenges which will take me away from the full-on program I work to right now.

With an intention of six Ironman races in the year I mentally divided them up into three sets of two. Australia and Lanzarote are done with little success, I hope for better with the next pair of Roth and UK. 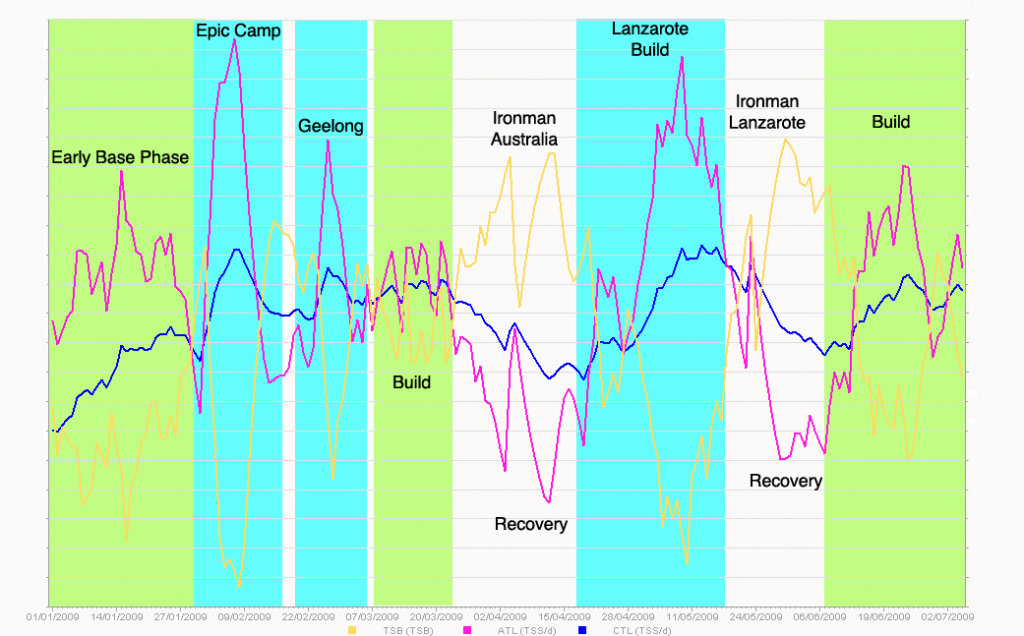 The year started with a good two months of solid training, building from a break of a couple of weeks in December. With minimal down time after the last race my base phase wasn’t the build up from a sedentary start. I remember listening to an interview with Chris McDonald where he talks of not really being able to take long breaks from training. As a pro triathlete who came to the sport late in life he doesn’t have the background to sustain performance in all areas with significant breaks. I wonder if that’s still the case for him two years on? As a late starting age grouper with high aspirations my situation is ultimately the same.

Those first two months I built my hours back up and kept the load high primarily via volume. Part of the aim was to get ready for Epic Camp and perform well there. Whilst my weekly structure followed a basic week I focussed on long sessions at easier intensities. Occasional group training or short races spiced things up with a little hard work. After two months the signs were good and I was starting to feel pretty strong. I was certain my endurance was at new levels at the very least.

Epic Camp was mixed for me, I was solid at first, but performance at races fell off. My ability to keep going was there, but I wasn’t able to call on extra reserves. Of course bruising the ribs didn’t help! They also enforced the extra recovery I promised myself after Camp. Something I’d learnt about from my mistakes the year before where I trained too hard after Epic Italy.

Following Epic Camp I had an easy couple of weeks before heading to Geelong and almost a mini-Epic Camp with Toby. We had a very solid week of training and whilst I didn’t feel I was at my best then a few weeks later I was going well on it. These two camps essentially finished off the base and afterwards the intensity in my program started to increase. I felt better able to cope with harder sessions and working at higher efforts. One thing to stress is even then the intensity levels being talked of are those appropriate for Ironman racing. A strong focus on endurance levels of power and speed, not flat out sprinting. Joe Friel recently posted an interesting blog post comparing the power zones triathletes and cyclists work in.

I aimed for a two week taper for Ironman Oz, some of the process was dictated by the fact I was travelling home at the same time. The result was I rested too much and was flat on the day. I’ve commented how I use WKO+ and TSS to help guide training and I was aiming to taper with it in a way that Joe Friel has recommended. In this case I didn’t and raced with poor form and moderate freshness. I recovered from Oz quickly despite the long journey home. I was well set up for my next training block in Lanza.

Lanzarote was great training. The company and environment gave me a really solid block with a good high weekly load. There was no more base phase as there wasn’t the time or need. My body was now in shape for slightly more intensive race focussed work. Essentially I was in a new build cycle. I trained very hard and the results were good. I was feeling my fittest that year and surprisingly fresh with it. Good rest and recovery was a key factor here.

This time I was able to stick closely to the Friel tapering method. With the Critical Training Load (CTL) I’d built up my taper was likely to be very short – roughly 10 days at most! I was happy with this and feeling great when the disaster of the abscess struck. I want to be very clear that was caused by friction with an old and broken saddle. I chose to race anyway and fought through to a result I was less than happy with. My preparation felt perfect, my fitness and form was great, but shit happens!

I’ll note here that none of my race plans involve big tapers – I don’t feel I need one particularly. Mark Allen advocates 4 weeks which seems far too long. Three seems to be quite a traditional number touted about. To me two seems about the longest needed. However I try to drive a lot of the tapering choice by the Training Stress Scores (TSS) in WKO+ and the rule of reducing CTL by about 10% overall whilst building a positive Training Stress Balance (TSB). This is still a work in progress and I do let feel override this if needs be. I’m not too hung up on these numbers!

Two Ironman races, three weeks. So to Roth and Ironman UK. Three weeks between them – not much time at all. Not ideal in the typical scheme of things. However I am in both these races and I want to race them both. I realise it’s unlikely I can have stellar performances in both if either. However talking with Chris McDonald at Epic Camp this year gave me some encouragement. He managed a win in his second Ironman in one week last year. I picked up some tips on transitioning between two close races which I’ll be trying out.

Very clearly this may prove to be a disaster. My approach is to treat Roth as a big, tough training day. What does that mean? It’s about testing out bike position and equipment and being sure I’m happy they’ll go well in the UK. Also an opportunity to try out racing at my new lighter weight and see what happens there. I’m taking the powermeter to collect race data for future reference. That alone will be incredibly valuable. I consider the run to be the most physiological damaging part of the race. Stylish compression socks will be back on and I will be moderating my pace carefully. It will be a hard race, it will be a harder training day, but the aim is to come out of it with a quick recovery.

Then those three weeks. There’s been an article on the Team TBB forum about their approach to heavy race schedules. The advice roughly takes the form of getting your body moving the day after the race. Starting with swimming and cycling and then introducing the impact of running. All short and low intensity at first. Extending a little in the middle and easing off for the final race. To an extent you’re bypassing the full recovery process the body goes into if you rest up after a big race. At the same time you’re keeping the stress as low as possible.

I’m fairly confident about this approach, even though it’s new territory to me. Following the races this year my typical training load has gone from 5 hours in the week after the race. Then 20 or so in week two and by week three 25 to 30 hours, roughly back to normal. For this process I expect it to follow more of a 10, 15-20, 10 pattern I think. I’ve not exactly charted it yet. Massage, sleep, good food and all the usual elements of recovery will be in there too.

Will this work? I’ll know in about a months time. I will be working my hardest to make it happen for me. I have attempted to train my best for this and make the most of the resources at my hands to make the decision. I took advice before contemplating doubling up Roth and the UK. I must admit at the time I had been assuming I’d have got my Hawaii slot in Australia or Lanzarote!

And beyond. August is going to be a recovery month. Unstructured training will be the key. I will train as time allows, though they’ll be a few other demands on me. The aim will simply be to get some recuperation done and not lose too much fitness in the time. Towards the end of the month I’ll start up a training program again similar to my work after Ironman Western Australia.

September will see me head out to my favourite training venue in the Pyrenees courtesy of BA miles! A weeks hard training in the mountains to kick-start the September campaign. The focus will really be about working on bike strength again and seeing if I can build on what I had earlier in the year. The exact plans that follow in the month will depend on whether I get to Hawaii or not. As mentioned Challenge Barcelona may be my other option. The primary difference will be when I back down the training for my race.

ITU World Long Course Champs will swiftly follow. Fortunately it’s an O2 distance race this year so a little bit more manageable after an Ironman! I will be looking to hold a solid race there, but probably not being able to exceed Ironman pacing at that point. Once that’s done it’ll be some more rest before a final build phase to a third Ironman Western Australia. My favourite race on the circuit and also my training base in Oz this coming winter.

Then my year is done and I can finish with a true break before thinking about the next one. That is a lot of racing, that is a lot of training, but there is recovery in there. Experience tells me if I behave well that the timings are adequate for me. Good rest and good food are key. There’ll not be much slacking off in between.

Tomorrow I’m going to write about the details of my weekly training and the type of sessions I do.

Justifications Part One – The Big Picture 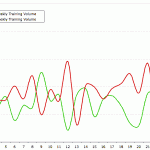