More from the Magic Slice

I am officially, officially tapering! Really, honestly, truly. To prove it I’m doing absolutely nothing today. No time in the pool, no sitting on the bike (my arse is relieved about that one) and no putting on the runners. Just rest, even if my attempt at a lie-in was the usual failure.

Of course if you read my blog the other day you might be asking yourself wasn’t he already tapering and resting? Well sort of. I mean Wednesday I really wasn’t going so well and I took Thursday easy. Had a great massage and got my legs sorted out. Then Friday I was going pretty well which was good for a ride around Capel (pronounced like cape not cap as I’m often reminded), Donnybrook and Boyanup. Not only was I riding well we managed two coffee stops, admittedly only because stop number one was so disappointing. 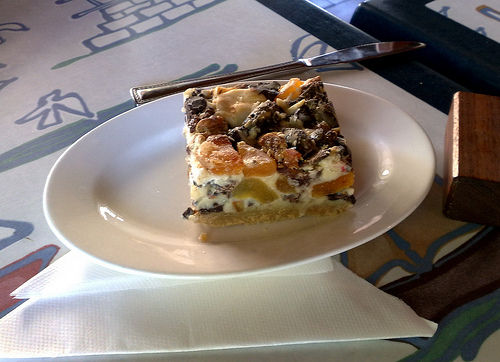 Which brings me onto the Magic Slice once more. Sunday saw me duplicating that Wednesday ride and heading back to Margaret River with Steven. Fortunately the legs were willing to play despite a hard time trial effort on Saturday. I have to say it’s amazing the difference that makes to a ride. No counting down the kilometres, not even to the coffee break. Instead I enjoyed the scenery, the company and the sun.

Once in Margaret River I was in no doubt as to which coffee shop we were going to. The place was heaving on a Sunday morning. I heard it was a thirty minute wait for food from the kitchen. Always a good sign if somewhere is popular just a shame it meant you had to queue so long. This gave far too much time to debate whether to have a Magic Slice again, or maybe the cheesecake, the Chocaholic cake looked nice and so did the Carrot Cake.

After five minutes of waiting and debating I was at the front and it was decision time. I went for Carrot Cake. It was delicious with superb texture and flavour plus a decent portion too. Yet it wasn’t quite enough for a ride I’d called the Magic Slice Run. I persuaded Steven to go halves on a piece of Magic Slice thereby doubling my sugar intake for the week! It was as sweet as I remembered and I left the cafe in something of a sugary haze!

Should you find yourself down in South West Australia a trip to Margaret River is worth it. Just make sure you allow time for a stop at Sail Cafe. As you’ve seen I’m a big fan of their cakes! It has to be said the coffee is superb too. Go check Steven’s blog post for a picture of the coffee art. Clearly they train their Baristas well.

A final point on this subject. Often I harp on about the Paleo Diet and avoiding too many carbs. Yet here I am dedicating hundreds of words to a simple slice. The Paleo Diet for athletes advises on the use of carbohydrates during training. I simply choose to get mine from the cake stop halfway through a big ride! Also one and a half cakes is far more than normal! It’s my one treat outside the diet, surely you can allow me that?

Back on the more serious topic of tapering where does that leave mine? Last week ended up pretty much as big as those before it both in volume and training stress. I have said that tapering was an art form to me and I’ve yet to master it. This is a little bit of an experiment. Training is really good at the moment, particularly the cycling. How well will a heavy rest week set me up for race day? A few hours of activity remain between now and the race. Enough to keep the body feeling good, but let it gain some freshness. At least I hope that!

I don’t feel like I’ve wandered blindly off track though. Not entirely anyway. There’s a good blog post by Chuckie V on how he has his athlete’s handle back-to-back Ironmans. Whilst I’ve gained experience on this one over the year there’s plenty of room to learn. Chuckie V suggests no taper for the second Ironman if your fitness isn’t as high as for the first. A good Ironman is reliant on fitness and freshness, but as he stresses fitness is paramount. 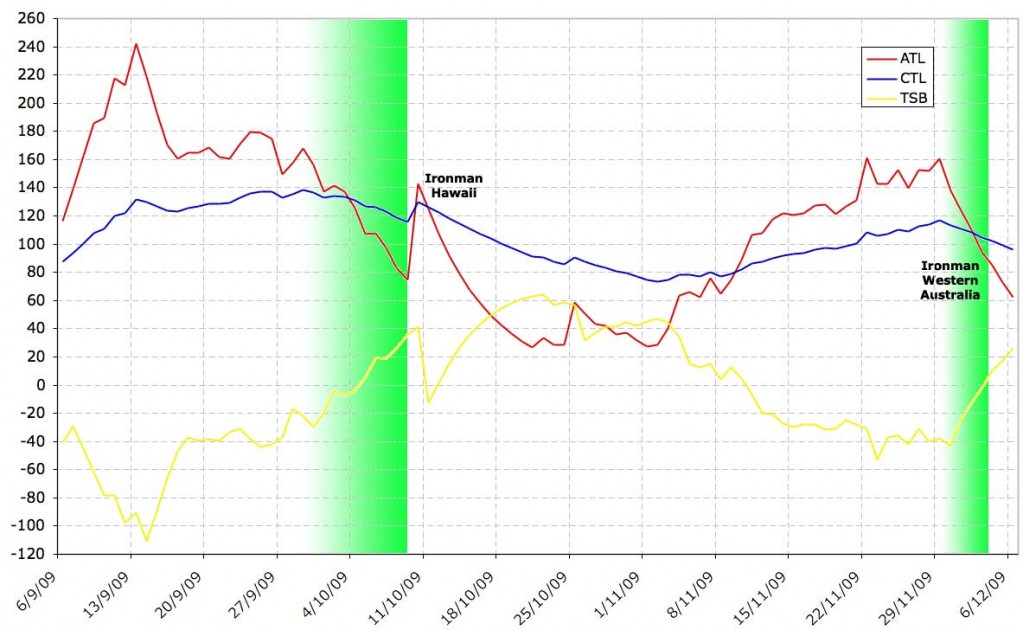 Okay, I’ve thrown in a chart for you. Looking at my fitness (CTL – the blue line), fatigue (ATL – the red line) and form (TSB – the yellow line) after Kona and leading to Ironman Western Australia. You’ll note that fitness is lower than it has been and according to the chart my form is reasonably good. I won’t have as high a form as in previous races, but my fitness won’t be as low as it might have been.

Like Chuckie V’s advise I’ve prioritised raising my fitness over a typical taper with more recovery time. The aim is to be in better bike shape (particularly) on race day and reliant on a good period of rest in the next five days to get me just enough freshness to race well. Looking at the CTL line I’ve done a reasonable job of raising it to previous levels. The cost though is I can’t have quite as high a form or as low a fatigue for the race.

As I often comment in these posts race day will show the wisdom of this approach. Should it work then perhaps I’ll be adopting it more often.