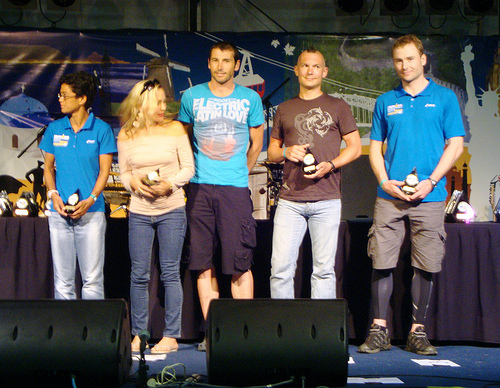 Here we are again, race report time. The sixth Ironman report of the year and hopefully a good one. If you read my last post you know the result and that it was a tough day. According to the announcers at the awards party there was a 12% drop out rate. Clearly a lot of people suffered!

There’s no daylight savings in Western Australia so it was light at 4:30 when we left for transition. It made the atmosphere there much calmer. I went through the usual routine, the five minutes it takes to check and setup my bike. Then it was a case of relax, make that last minute toilet trip and get the wetsuit on. A few little hints of nerves were there as I considered my plan. Racing isn’t the worry, it’s whether I can stretch to my goals.

Out of transition and down on the beach triathletes milled about in the water waiting for the start. Standing there in the ocean I felt something on my feet. Looking down to see a crab scuttling through the crowd of athletes pincers up in defence. Clearly not happy to be disturbed. I thought how bizarre it would be to end up with a DNS from a crab!

The start almost took me by surprise. Clearly I’d missed any warnings and had luckily finished cleaning my googles thirty seconds before the horn sounded. I was fortunate not to get bashed about much and was soon drafting on decent feet. In fact to the end of the Jetty I had feet to follow. It felt great, really comfortable and the water was clear and calm. More like a pool than the ocean. Round the end of the Jetty and for the return I opted for the direct line rather than tracing the Jetty. It potentially saves some metres of swimming.

I caught onto the feet of a couple of guys heading the same way. The extra saving from a draft was a nice bonus. Unfortunately at some point they veered back to a sighting buoy and the main group. I suspect that wiped out the gains made from the more direct line!

Whilst the return leg of the swim was lonelier and the draft not quite so effective I had a decent swim overall. I touched shore at the hour mark and dashed up towards transition. I felt good, the swim had gone well and I’d not had to expend much energy. Sure faster would be nicer for my goal, but I was happy I was on track.

Transition would frustrate this. My application of bodyglide proved to be ineffective and I took far longer than normal to strip my wetsuit off. Annoyingly making a couple of holes in the left sleeve’s seams in the process. Finally out of my suit the rest of transition was easy and I was quickly out on the bike. 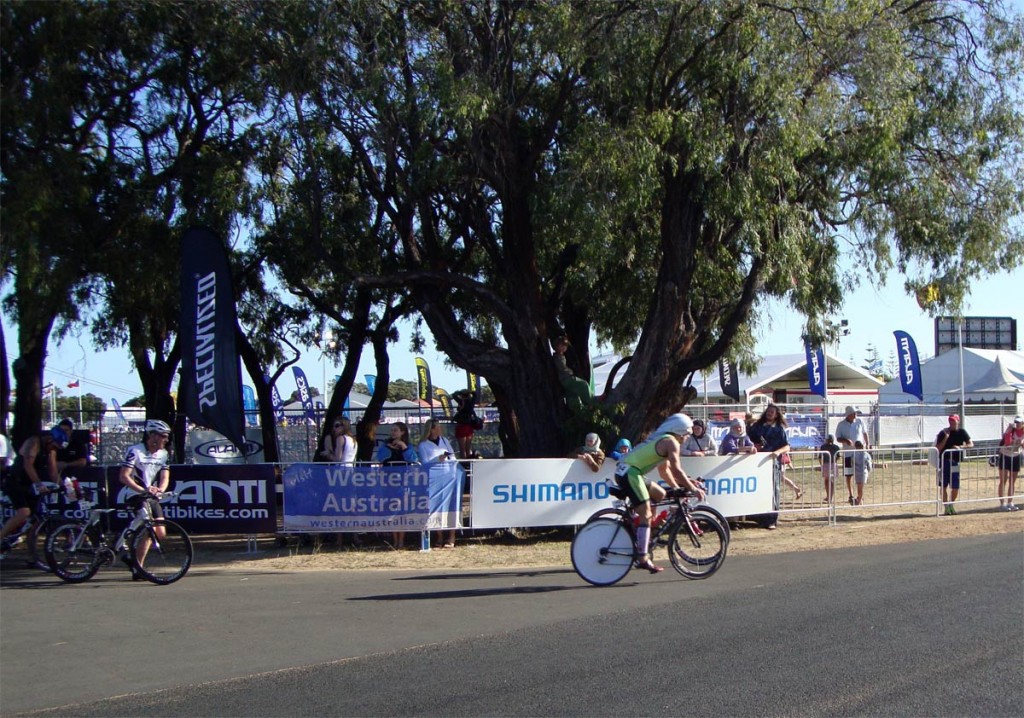 I’ve been avidly following weather reports all week so knew what to expect from the wind. A typical Southerly meant Layman Road would be hard work leaving town, but easier coming back. The wind wasn’t excessive, but strong enough that I’d have my work cut out for me. I rapidly settled into a good pace, trying to make myself work harder earlier. There was a schedule to keep.

As expected my legs felt terrible, but I’ve learnt to trust that they’ll come good. I pushed along overtaking plenty of athletes with only the occasional one passing me. I knew my pace was good and I trusted my plan. If they pass they’re either a better cyclist or they’re not pacing their race well. I always hope it’s the latter or that they can’t run!

The perfectly flat profile of the bike makes it sound easy, but the reality is you get no breaks. It’s constant work. Throw in some rough chip roads and the occasional headwind and things start to get tougher. I was largely racing by feel, but the powermeter was there to urge me on should I slack. Read previous race reports and I focus on heart rates a lot. It’s fair to say I wasn’t so strict this time!

I never had a pace line or group to work with on the bike. I spent the day making my way up the field, catching riders and leaving them behind. It’s a good feeling for sure and helps spur you on as you set new targets down the road. Pushing the pace made my nutrition harder than usual. Nothing seemed to digest well. Along with the usual High 5 gel bottle I had some bars that I found unappealing and chocolate powerbar gels which weren’t as nice as I remembered! I ended up grabbing cookies at a couple of aid stations just for variety. They were much nicer than anything I had!

The wind obviously contributed to slow bike times, but the rising temperatures were a major factor too. I found myself adopting amy cooling strategy from Kona. Grabbing a bottle for drinking at the start of aid stations and one for dousing myself at the end. It worked reasonably well, but I should have taken more fluids really. My mouth was dry by the time I reached transition. I arrived there a minute or two off my 4:50 target, but pleased with how the race was going.

With my new calf compression sleeves on there was no more messing about with the socks in transition. Did this make me faster? Not sure, but it did mean I could ensure I got an ample application of sunscreen on my arms and head. I was particularly concerned not to burn my freshly shaved scalp. My mohawk ensured I had a media camera following my whole transition so perhaps I’ll make the video! 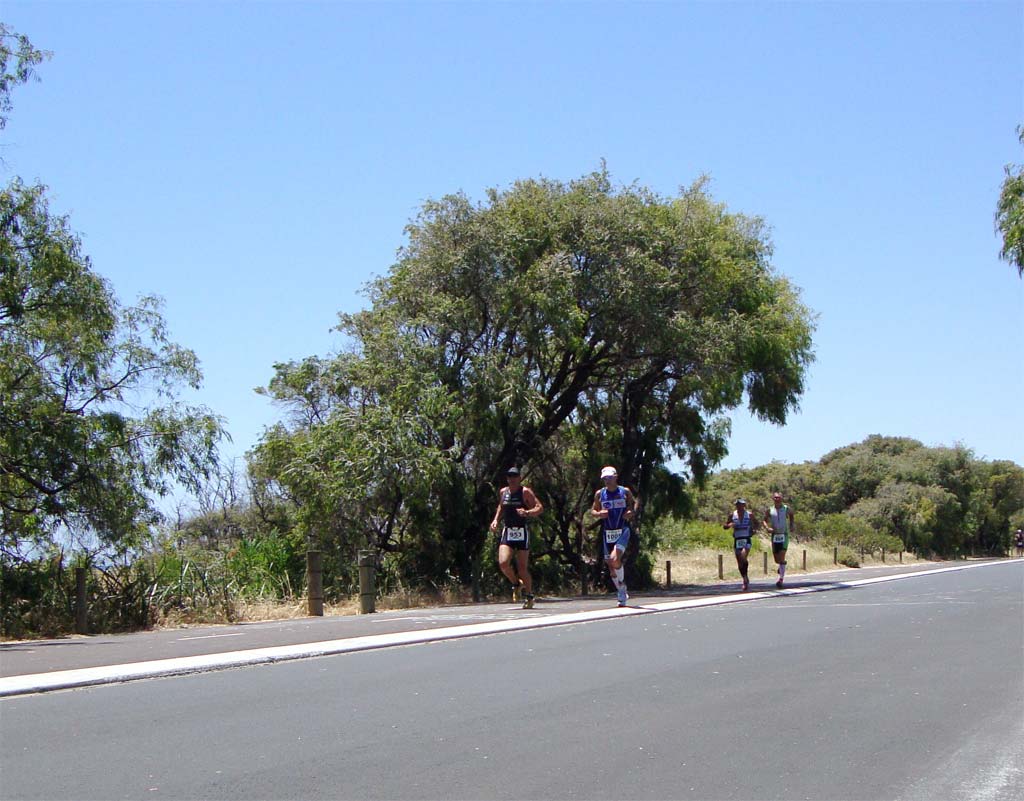 The run is my event as far as I’m concerned. As I left transition I knew I would have to beat my 3:05 goal for any chance of hitting the 9:00 target. The legs were already telling me this wasn’t going to be easy. I settled into a solid pace, checking progress as I passed the two kilometre marks. In the middle of the race I wasn’t thinking my clearest and it took me six kilometres to realise I was miscalculating my pace and going too slowly! Not that I could speed up much if I’m honest.

I lost pace on the second lap. I felt terrible. Somebody had replaced the calf muscles with rocks. The compression sleeves seemed to hold them together as they occasionally twitched hinting at massive potential to cramp. I was suffering now and knew I’d have to keep suffering if I wanted any shot at a decent race. Nine hours was a dream, but maybe 9:10 or at the least a PB?

The heat that proved uncomfortable on the bike was a nightmare on the run. You could see everyone was suffering. Let’s be fair I ask for hot races as I work well with heat, but like Hawaii this was testing me. The trick that saved things was tipping ice down my shorts. Aid stations were a little bit hit and miss for this. If I was lucky I’d leave with shorts rattling with ice cubes! The difference being cool made was phenomenal.

Once again I found nutrition suffered and whilst I got through my gels I switched more to the High 5 drink and water. I appear to be able to run further than I thought just on aid station energy drinks. It could be something interesting to trial in future races.

My plan involved pushing the final lap. Despite the concrete legs I tried picking up the effort even if the impact on pace was minimal. Somewhere out towards the far turn around I passed another athlete who asked my age group. Despite the fact we were both on our last lap I told him. I feared I might end up into a long head to head battle, but instead he simply told me I’d moved into second place! I had no idea where I was in the race and now it seemed I might be on the podium.

It wasn’t a time to take it easy, I pushed harder. I did consider he could be lying, but with 8km to go I should be working hard. I saw Busselton Russ going the other way and he told me there was another guy a little way ahead. It spurred me on and I dug a little deeper. That was it till the end just keep pushing as hard as you can. Those last six or seven kilometres hurt and I barely remember them!

The final turn and last kilometre was a pleasure. Knowing things would soon end I made a final effort. The time wasn’t relevant anymore it was all about holding onto that second place in my age group. Down the finish chute still not really with it I crossed the finish line exhausted. Straight into the arms of the catchers and the announcement that I was second in the 30-34 age group. I was going to Kona!

The recovery tent was a strange mix of pleasure and pain. I really felt bad, but I was on the age group podium! Not only that my overall placing looked to be good. After a little food I headed to massage where almost being a local got me a little preferential treatment. Knowing the organisers of the massage and a some of the masseuses can be a help!

After this epic I’ll save stories from after the event for another day. The awards ceremony in Busselton is great, especially when you’re receiving a trophy! A larger scale than my experience in Bolton this year. It nicely rounded off a great weekend.

If you’re interested in reading more about the race, check out Steven and Jo’s blogs on the subject. You get both an insider and spectators view point of race day. They both gave me massive encouragement on the day. Steven is one of the loudest supporters you can have even when he’s racing!