I’ve had a few days taking it easy, thinking things over and considering my race. I’ve already written up race reports for Triathlete Europe and Tri247 so I’m going to focus on performance in this blog.

When I signed up for Ironman New Zealand I’d assumed it would be my main chance at Kona qualification. With that done the focus for New Zealand changed. For a while it was a bit lost, probably just to get a podium finish in my age group. When I wrote my targets the day before the race, that was the goal. More broadly though the race was a chance to test my fitness and training so far this year. Was the work I’ve been putting in doing any good or was I just playing?

I was keen to test the value of my recent swim training. A change in approach and attitude appeared to have yielded results in the pool, but could I translate that to a race? I’d ridden more than I’d ever manage in the past two months. There’d been plenty of hard work so could I push more on the bike? My run fitness has been all over the place. Had the big push in run volume earlier in the month done enough?

I’m not going to call it a training race. I went in with the aim of racing as hard as I could. No holding back. I wanted to see where my fitness was, how I’m racing now and come away knowing I could build on this. 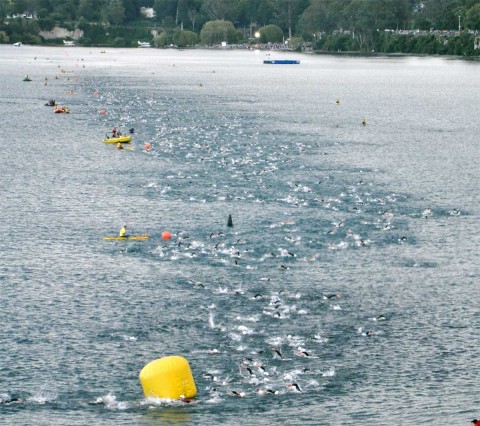 The big aim for this race was to come in under 1 hour for the swim and I certainly achieved that. I know a fast course helped a little, but I’m still pleased. Comparing my placing with my result in Western Australia I clearly moved up the field. From finishing in the top 22% in Busselton to the top 16% in Taupo.

I’ll admit the problem with that statistic is there are many variables involved. Choice of starting position, the field in general or the line I swam. If you take the average swim times from those two races New Zealand is about two minutes faster. I’m not disheartened by this.

In Taupo I swam at an average of 1:31 per 100m and it felt comfortable. Not just a matter of drafting, I noted that when I lost feet I could easily get back on. I’m certain I was moving through the water much better than I have done in the past. At the very least I didn’t feel I was expending as much energy for the pace and came out of the water feeling fresh.

It’s exactly what I wanted to start out my year. A confidence booster and makes me feel the 100km of swimming I put in in February was worth it. Of course it sets a new goal for future races and also a precedent for training. To keep improving I’m going to need to keep the pool time up.

I’d checked my power numbers from recent rides and felt certain I should aim for a slightly higher race wattage. Not that I particularly focus on holding a number during a race they’re more of a guide. I watch power, heart rate and with perceived exertion try to manage my effort. Largely looking to avoid extreme spikes of effort or dropping off the pace.

Ironman New Zealand’s results pages divides the bike course up into four 45km sections. The first and third quarter are outward bound starting with hills in town then flat after a good downhill. For 2010 there was a solid tailwind for a lot of the way too. The second and fourth quarters are back into that wind and have a more gradual uphill before some fast descents in town.

The first quarter being straight out of the swim and with early climbing my heart rate started out high. Once past the hills, with the wind behind me it very quickly settled as effort levels eased. Whilst climbing I’d watched power to ensure I avoided setting new records this early in the day. Once the terrain had eased it was useful for ensuring I kept my work rate up.

With the elevated start my heart rate averaged out at around 143bpm for this section. Towards the high end of where I race, but not surprisingly so. At that point the wind was only starting to build and the going was easy. My power averaged 215W with the climbs yielding a higher normalised power of 225W. 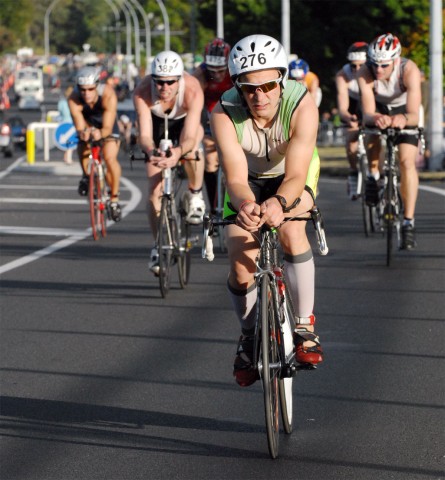 The second quarter from the turn around and back sees my heart rate drop a little to around 138bpm. That’s pretty comfortable racing territory for it. I felt flat during this part of the race like I lacked some drive. Now I was riding into a headwind the reality was I was working harder – averaging 221W with a normalised power of 230W. It seems the reason I felt worse was a few extra watts!

Into the third quarter and once again it’s the climbs out of Taupo. The second lap is slightly different to the first throwing in a bit more climbing and making us work into the wind for some of the outward journey. Early into this part of the race I came good and started to push more. The result was an average power of 218W and a normalised power of 228W. Not too much of a fall from the second quarter despite the tailwind.

From the last turn around home it was all into strong winds. My heart rate rose back up from the high 130s and into the low 140s. More importantly my power rose to average 230W with a normalised figure of 240W. That’s certainly the strongest sustained period of riding I’ve recorded over an Ironman distance. I worked hills hard and kept pushing till the downhills into town.

Overall I averaged about 221W with a normalised figure of 230W. It’s up there with my performance at Roth from last year. It’s similar to my performance in Western Australia, but with a bit more variance in the power. The perfectly flat course in Busselton gave matching average and normalised power values around 220W.

Whilst this doesn’t point to radical improvements on the bike (yet) I did learn a few lessons from the race. Firstly I can push harder than I might think and without too much trouble. Secondly if I want to do that I need to maintain a steady stream of nutrition focussing on regular intervals for eating. If you feel that you’re not riding well it probably means you’re pushing or you need to eat!

For future races I’ll be adopting a more regular feeding strategy and starting it earlier. Really looking to take in some calories very early on the bike and then keep topping up every fifth-teen minutes or so. 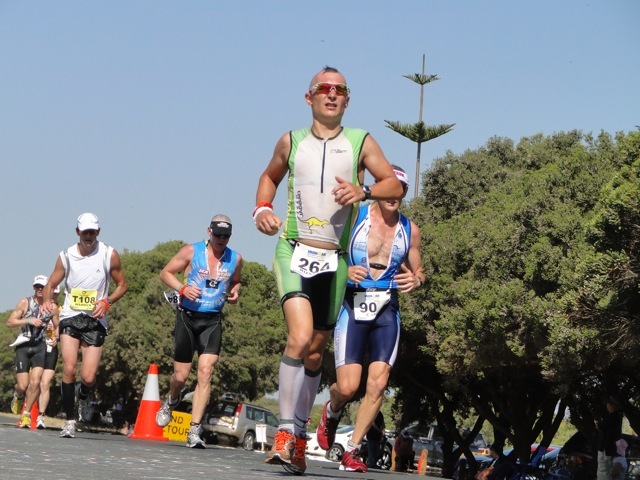 I’ll be honest I wasn’t that happy with my run. Like Western Australia my overall run placing sounds great 31st there and 33rd fastest here. I’m capable of faster than a 3:20 though.

I knew my run could be a weakness. I wasn’t at my best racing weight. I’d edged closer to Roth Weight, but still had a few kilos to go before Hawaii weight. This would obviously have some impact, but equally the run training up till now had not been as significant as into Hawaii.

Since Hawaii I’d struggled to settle into a good period of run build. Partly the fault of running the Perth Long Distance Worlds two weeks later. My legs were in no shape to be racing so soon and I paid with another lost week of good running. Western Australia hadn’t had great preparation and I felt I’d got through on mental toughness!

Epic Camp this year had allowed me to get a couple of reasonable run weeks. From there I worked on building up run fitness aggressively. Possibly too aggressively as after three weeks of hard work I struggled for a week or two. Not injured, but finding my legs constantly aching and it hard to combine good run and bike training. My run volume cut back and my taper was effectively started earlier than planned. I missed a couple of longer runs I would have liked to have in my legs.

No excuses though. I’ve two things to take from this. Firstly it’s I need to get down to Kona weight again as it works for me. Secondly I need to focus on a period of consistent running before really pushing things again. When I do push I’ve got to keep the block short and not go too far with it.

I went out onto the first lap of the run feeling good and I let myself go at a harder pace than usual. Much as I knew that the early kilometres always feel fine I didn’t reign things in. Instead I decided to see what happens. I really paid for it during the second lap. Tthere was some slowing on the latter half of lap one, but the first half of lap two was shocking.

With hills and a headwind the pace dropped well under 5:00 kilometres a few times. Given I was able to pick this back up and run with others I wonder how much was mental focus or low energy? Could I have pushed a little bit more or perhaps I’d not taken on enough gels in the earlier parts of the run.

Worth noting is I think I did the bike on the least amount of food ever. Funnily enough it was also the most energetically expensive race I’ve been in. I was likely entering the run on a greater calorie deficit than I’m used to. There’s room to take on more gels on the run and I should probably focus on doing that more in the early stages.

I’m happy with how the race went. It’s close to where I hoped to be and certainly a good sign of how the year has started out. I also felt I learnt a lot throughout the day. Probably the biggest lesson related to nutrition. The need to start early and often. Not taking in too much at a time, but regularly taking something on board. I think my past tendency has been to go far too long between feeding and to consume too much at once.

I clearly need to get my run together. Sure it does well in the overall field, but it could be pushing me further forward. The great run shape of 2009 came from the back of lots of steady mileage plus very regular run racing. I’m going to look to do the same over the coming year. Plenty of miles plus regular speed work. As for the rest it’s more hours in the pool and more hours on the bike. I’ll keep hunting out the hills for the latter and working myself hard.

It’s about time to get back into things and focus on Lanzarote.