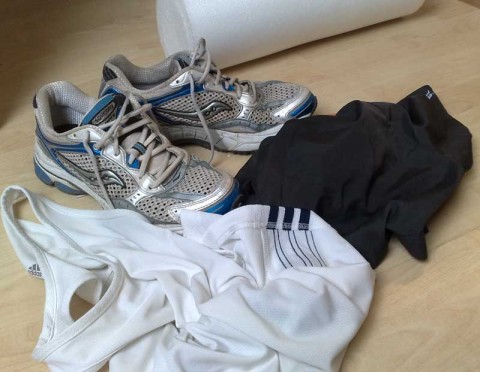 Monday – Weight: 73.8Kg, Run: 26Km
Woke up a little nervous about the first run. It’s been three days since Lanza where I already pounded my legs will three recovery days be enough? It doesn’t feel like it. That sort of attitude doesn’t get 100 miles run so it’s on with kit and out the door for an hour. Remarkably I felt better than expected, perhaps the week will work out after all!

Confident with the first run under my belt I head off for a ride with my mate Rich. I might be able to run, but clearly I’m not over Lanza. The next four and a half hours are a struggle and I wonder if the batteries are going in my Powertap. Any excuse for the poor effort!

After a short break it’s back out on the road to imaginatively run the reverse of my morning route. I’m going to get very familiar with the local roads over the next week. Once again it felt good and the hour flies by. Not only that I’ve notched up a couple more kilometres than I need.

Tuesday – Weight: 73.1Kg, Run: 24Km
I head over to the Tri2O Lake for a combination of running, swimming and cycling. We’re not far from the Kennet canal path so I can add some variety to my routes. I head out for an easy run with Clive his pace is a little higher than I like, but within my comfort zone. We split at halfway and I spend half an hour on my own. More concerning than loneliness is the tightness and discomfort in my right ITB – early days for an injury.

Rain calls off plans for a threshold bike session and instead I’m soaked riding home. Thoughts of doing the set on the turbo evaporate in the absence of any enthusiasm. I decide this week is about running so best to focus there. Besides I find turbo trainers mind numbing – it’s going to be a tough winter!

Another slightly shorter run in the late afternoon keeps me on target for the week. If anything the leg soreness was worse it’s definitely a concern. I’ve been reminded that you should always be cautious setting yourself distance goals. There may be a point where I have to make a call and bring the project to an end.

Wednesday – Weight: 72.8Kg, Run: 23.5Km
I decided to sleep in compression tights for the first time in ages and my legs actually feel a bit better! I head out to run another 10K and find that there’s still plenty of soreness, but once I’m warmed up it dies down. My initial kilometre is always slow, but I settle into a more acceptable pace after a while.

In addition to the compression I’ve started using the foam roller on the right ITB. The strange thing is my legs felt better running than resting! For some reason when I’m inactive my ITB tightens and is most uncomfortable. My second run confirms this and I begin to wonder if the solution is just to keep running!

I skipped any other form of training as I felt too tired. I’ve realised run training breaks you down a lot. It’s far harsher on the body than cycling or swimming which I’ve not really appreciated that till now. At the same time I seem able to keep on going, no bad thing when 100 miles is the goal.

Thursday – Weight: 73.4Kg, Run: 16.5Km
A second attempt at Tuesday’s combined run, swim and bike this time with success. I ride over to the Tri2O lake and head out for a canal run. The right leg is still a concern and doesn’t show any signs of getting better. I decide that an easier run is best this morning and cut it short at forty minutes.

A swim doesn’t nothing to help the leg, but the ride proves to be a lot better than earlier sessions. I think aside from the ITB tightness my legs are finally recovering from Lanza. The same can’t be said about my weight which seems to be stuck and I’m feeling bloated.

It took will power to get a second run out of me. I felt fine once I’d warmed up, but left it too late to do the distance I’d planed. I admit I wasn’t disappointed as an easier day was needed even if the final three days have become a bigger challenge.

Friday – Weight: 73.2Kg, Run: 35.5Km
This was odd my legs felt better and the tightness and discomfort had vanished. Could it be the twenty minutes before bed with my legs up a wall? The foam roller and the compression tights may have helped. I’ve always been sceptical about compression in recovery, but maybe there’s something to it.

The first run went well though my legs feel sore afterwards. I’m tired and the consistant discomfort hasn’t helped. Motivation has fallen and my planned bike ride slowly slips away. I did the worst thing I could and started shuffling training sessions to catch-up later. Eventually I headed out on a second run before lunch just to do some training.

A run and some lunch helped me feel a lot better. I remained ambivalent about riding until the idea of running more dawned on me. An evil plan was hatched to run 42km in one day – a full marathon! The plan was brilliant! Lethargy wasn’t and later that afternoon I headed out on the next run.

Some music kindly donated by Paul helped me along the way and I found myself moving with a little more pace. Halfway through the run I passed someone and they latched on. Motivation! My pace picked up and an easy run headed towards tempo territory. The next half hour was exhilarating as I dropped my new companion, but kept on pushing.

I arrived home with my legs feeling fantastic. No more aches or pains! Was the solution just running more and harder? Unfortunately my stomach doesn’t feel as good and puts pay to a fourth run for 42km. I take some amusement that I’d been discussing the topic of stomach issues and training stress with my new supporters Biestmilch that morning. The positive is I’m no longer feeling bloated though!

Saturday – Weight: 72.7Kg, Run: 10.5Km
Still lethargic from all the running my long swim became heavily abbreviated. On the other hand I put in a decent effort in the time I have. I’m feeling very comfortable in the water which is a big plus. With a couple of months to Kona there’s room to be optimistic here.

After work at the lake I came home, ate and put off training for an hour or two. Eventually I go for my first run. This time no music, but that same higher pace effort. It’s a very positive run leaving me feeling strong. I wish I could muster that same energy for other training. It’s a run focus week, but I’ll be glad to restore some balance.

I can see where Lydiard was coming from with this kind of volume. What’s interesting is how the tightness and soreness cleared over the course of the week with little direct action from me. Not only that my legs and core feel much more stable on each run. Fatigue seems to have become less of an issue too.

I’m tired and close to the target so I ended up taking the rest of the day off. I’ve planned four very big days ahead and some rest is needed.

Sunday – Weight: 72.4Kg, Run: 30.5Km
Had a bad night’s sleep from a combination of developing hunger and mild cold like symptoms. More impact from stress? Whatever the cause I was up early and tired. Still lethargic thoughts of an early morning run are abandoned I’ll stick to a single long run in the afternoon. Instead I go to the lake for work and have a great session one-to-one coaching open water swimming.

Coming back before lunch the lethargy was still an ongoing issue! I abandon a plan to get the run in then and instead followed Challenge Roth for inspiration. It doesn’t fail to deliver with impressive results from Rasmus Henning and Chrissie Wellington, particularly Chrissie of course! Also great to see Biestmilch athlete Sebastian Kienle‘s fastest ever Ironman debut. Going sub-8 hours first time out is setting the bar high!

It’s wasn’t inspritational enough to get me out until five in the evening. Finally I put my run kit on and started. Soon I’d settled into a comfortable pace and with pleasant weather was feeling great. Fifty minutes in and my stomach starts to complain necessitating a visit to some bushes! More signs of the affects of the training load?

Other than that interruption I had a great run. My legs felt quite fatigued as I reached the 25km mark, but I kept pushing to ensure I hit 30K and had a comfortable safety margin on 100 miles. I got home knowing I’d achieved the goal one hundred miles run in a single week! I was also pleased to have finished with a proper long run as the Lydiard method recommends.

Monday: the aftermath! – Weight: 70.9Kg!!!!
Just had another bad night’s sleep! Hunger again and more of those cold like symptoms that seem to vanish during the day. Tired again, but with a big, balanced day of training ahead. I’m returning to the biking and swimming now.

Most shocking was the weight on the scales this morning as I’ve suddenly dipped below 71kg! I had to double check! Clearly the emphasis is on eating more now. I’m getting close to goal race weight and it may be taking its toll on me too. Whilst that reading is probably low I realise and crash like I’ve had the past three days is significant.

Off for the first run of the day soon. Just a short one to the pool!