Failure! That’s how I feel about the past week. It’s not been what I wanted on a training level at all. Having backed up week after week of solid training I finally have one that falls apart. Plans disintegrate, consistency fails and I yo-yo from solid days that are still a bit too easy to almost complete recovery days. Motivation sinks and the week finishes with a full rest day.

Yet I don’t feel disappointed. There’s a sensible voice in the back of my head telling me my expectations were simply too high. In the past few weeks I backed up a hard block in Lanzarote with a hard running block. Inevitably when you start putting some of the toughest training you’ve done together and don’t have much rest you grind to a halt.

All the time I’ve been focussing on losing weight too and having some success there. Much as this morning I weigh 1.2kg higher than yesterday thanks to combining a rest day with a belated birthday dinner! It’s additional stress on the body during a stressful period, but the important thing is the major weight loss is now done and I can focus on eating to train much more.

I had the pleasure of meeting up for an easy ride with John Franklin on Saturday. We shared experiences as full time athletes both the good and the bad. It was remarkable how much similarity there was. One of the topics was how vital it is to know your body and as I said to John I know mine well, but get frustrated it won’t always do what I want. When I planned this period the sensible voice in the back of my head knew this crash might happen.

The reality is it’s not that bad though. I may not have had another massive week boosting performance across the board, but I maintained my fitness levels for the week at a very high standard. When I look in my Performance Manager Chart in WKO+ I see figures at similar levels to Ironman New Zealand and way above what I entered races with last year. Take running alone and fitness levels are at an all time high!

The numbers this week disappoint. I’ve not been my usual big volume self, nor can I claim much quality in those sessions.

I can find good. Mainly getting back onto the bike, but beyond that I struggle. As mentioned I think the fact I maintained my fitness levels in the performance manager whilst not consistently training is the biggest positive. There was no big fall back here, but no real gains either. 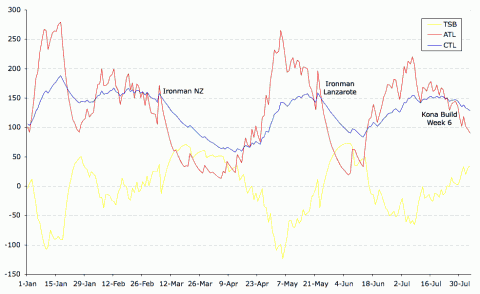 As you can see the first month of my Kona Build has done a lot to bring Chronic Training Load (CTL) on. This last week though has been more of a plateau. An inevitable point in a training cycle and one that you have to deal with. I tried working through it at first, but fatigue just went against me.

Yesterday I made the call to take the day off and rest up. I ate very well and more importantly slept lots too. The result seems to be a lot less fatigue today, but time and a few hours of training will be far more telling.

My original objective was to train like normal this week so an obvious bad is I didn’t. Whilst I think in the long run the lighter week may do me good it’s still a negative that I wasn’t smart enough in my planning to account for this. I dealt with a plateau in an ad hoc way.

The paltry amount of swimming is terrible as well. I’ve no real excuse that one is purely a motivational issue last week. Swim sessions are poorly timed for me ensuring early starts all round (oddly I can get up early, but starting training is hard!) The result was I failed to go swimming as much as I should have even when the opportunity was there. When I need to be taking forward steps in the discipline it’s a major error.

The very low run volume by recent standards is also a major disappointment. I’ve said one measure of the success of my 100 mile run week would be if I backed it up with another solid run week. I failed. I was just too tired most of this week and struggled to motivate myself out the door. Add to that a slow tightening up of my left hamstring that gave a little discomfort and I was happy to run less.

Sleep isn’t charted here, but is probably the most significant bad of the week. Typically I’d sleep seven to eight hours a night. This past week I was lucky to make six. Bad habits and a mind buzzing with thoughts and ideas would keep me up. I’ve a number of little projects on the go all means of supporting the lifestyle and I find myself routinely distracted. I need to make sleep a priority again.

So a disappointing week which I can explain away. Too far out from Hawaii to be considered a disaster and potentially the rest and the experience will do me good. At least I’m more aware of my fallibility in the face of a plateau. Next time I reach this point I can aim to deal with it in a sensible manner. Constructing my plans beyond next weekend’s ITU Long Distance Worlds has been influenced with a better recovery period built in.

The week ahead is an interesting one I have the ITU Worlds at the end of it, my final race before Hawaii. Whilst I’d like to do well there it’s not a major goal and I’m left with choices. One option is to taper properly this week and go in extra fresh to see what happens. The other is to carry through a hard four day block of training before a two day mini-taper.

General wisdom would say the former gives me the best chance of racing well in Germany. However it impacts Hawaii preparations, giving me two to three weeks of at best maintenance in the middle of my build. A block of hard work now may leave me fatigued for the race, but it would minimise the overall impact of fitnes. Build up a little more till Thursday then lose some fitness over the race and recovery.

Either way the plan is a good recovery week of regular, but light training after Germany leaving me fresh and motivated for the final pair of hard Hawaii training blocks. I know once the ITU race is out the way I need to have extra focus to ensure I train to my best.