☰
Home > A Crazy Idea – The US Ironman Tour

A Crazy Idea – The US Ironman Tour

It was early evening the day before the ITU Long Distance Worlds and a group of us headed in to Immenstadt for the inconveniently timed race briefing. We’d gone early for pre-race coffee and cake and after a short exploration of the town had stumbled on the perfect German bakery. Both coffee and cake was excellent and I didn’t regret the little bit of carb loading prior to my race.

Conversation turned to professional Ironman racing and plans for the coming year. I noted that if I completed my 2011 objective of going sub-9 in Austria I could probably get a pro licence. If you buy a licence for $750 you can enter as many Ironman and Ironman 70.3 races as you like. You don’t need to worry about getting your entry in before they fill either. What would that means for someone who’s not going to be winning pro races, but has raced a lot in the past?

I commented that it’d make it easier to get into the US races which can be tricky for Europeans. With preference for registrants on the day we don’t get much chance to enter some of them. I’ve enjoyed the times I’ve raced in the US and would love to do it again. Sure there’s Hawaii, but that’s a different game. Outside of the World Championship there are eight other US Ironman races I could do.

Rob noted I could do all the US Ironman races for the bargain price of $750. It’s not like I hadn’t set a precedent for racing a lot in a single season. He pushed the point and suggested a road trip. Me in a Winnebago driving across the US making stop offs along the way to race the Ironman events. It was a stupid idea!

View US Ironman Locations in a larger map

Stupid enough that it needed further debate. The conversation went on as it would on several more occasions after that. Logistically it’s huge, I can only begin to imagine the cost of such a trip. How would I fund it? Could there be sponsorship? For sure I’d be blogging, video blogging, twittering and all over the social networks. Perhaps I could get something in a magazine? How about a book? The more I talked the crazier the idea became.

On arrival back in the UK one of the first things I did was create the Google map above. Charting where the races are and google’s recommended routes between them. I pulled up the data into a table of stages with the driving involved. Would it ever be too far? And would it be possible without some form of support crew?

Since then I’ve made little more progress. I discovered how expensive renting winnebagos can be and scaled down the size of mobile home in mind. My conclusions so far is the best option is to buy a second hand mobile home and sell it at the end of the trip. Fuel costs will be a major factor of course, average prices suggested something in the order of $5000 minimum on gas!

Following the early excitement the idea has percolated in the back of my mind. Sometimes it seems too crazy and has to be dismissed, but then there’s a real possibility and I’ve time to work towards this. It would be a rare adventure and amazing experience. I left work and became a full time triathlete on the argument it would make for more interesting stories in my old age. A trip like that would be hard to top on those lines!

Yesterday morning at the Tri2O lake I was chatting with a regular Alex Flynn. Alex is 38 year old guy who unfortunately suffers from Parkinsons. He’s not taken this sitting down, but instead pushes himself through endurance challenge after endurance challenge to raise money to help fight the disease. Have a look at his website, Like his Facebook page, but more importantly donate some money!

There’s a good chance I’ll be working with Alex on some of his projects in the future. His enthusiasm and drive is infectious and we had a great chat. There’s lot’s of opportunities there and all for the benefit of a good cause. He’s also inspired me to consider the potential of this crazy idea once more. Perhaps a US Ironman Tour could work and perhaps in the process it could do some good for others?

I told Rob I’d post about the idea just so people knew it was in the back of my mind. It’s the first step towards actually committing to the project. I also told him it entirely depended on me being able to go sub-9 to get a Pro Licence and raising the required funds to make the trip happen. There’s a long way to go yet. For now it remains a (slightly) crazy idea. 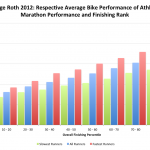 Examining Further the Relationship Between Ironman Bike and Run 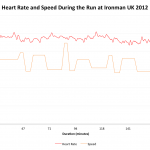