I may not be able to run, but I can still write about it. Improving my run is a key part of my plans for an improved Kona performance this year. Now I’m in the last six weeks of Kona preparation I want to consider my race goals, how close I am currently and what I need to do to reach them. Six weeks and a taper feels like plenty of time one minute and all too short the next!

In 2009 I ran a 3:16 in Hawaii which was good, but leaves room for work. I was in great run shape in terms of weight and consistency of training. However what I was lacking was a volume of training behind me. Aside from one significant run week I had followed a program of short, frequent runs. It didn’t do a bad job, but left me with the question of what I needed to do to take the next step.

I’ve given a partial answer in the first part of my Kona build. The one hundred mile run week, or more specifically moving to a larger weekly run volume. One hundred miles was simply a target based on a classic training volume quoted for runners. For a triathlete with two other sports it’s too much to consider, but as an experiment and run focus was a perfect goal.

The test for this approach came at the ITU Worlds and I was pleased with the results as I recorded the 9th fastest age group run split on the day. My time of 2:08 for 30km was close to three hour marathon pace which would be the dream for Hawaii. The combination of weight loss and high volume running had prepared my legs well.

With certain kilometre markers missing and others misplaced on the course the individual distance splits weren’t much use in judging my pace. However with three laps I can compare my performance across the three. I know average pace was roughly 4:16 per kilometre, but how did I distribute that over the race and were there any low patches? 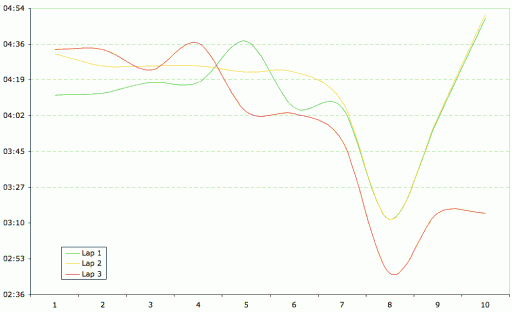 What stands out in the graph is that kilometre eight was way out! I suspect some of the middle kilometres were long as well as the last kilometre. At least by comparing laps the distance between markers is less important as the chart gives an idea of relative pacing.

Lap One (green) started faster than planned, but felt comfortable and I decided to stick with it. This is always a risk and I know I’ve suffered because of it in the past (Ironman New Zealand springs to mind). The dip around the 5km mark is interesting because I can’t explain why I dropped off pace that early, but what saved me was a passing pro. I managed to latch on and run 10m back from him.

It’s much easier to run faster if someone else dictates pace and from then on the lap went well. Being able to run at the same pace as a pro (admitedly off a slower bike split) was good for confidence, but once he shot off down the finish chute I was back on my own.

Lap Two (yellow) starts slower mainly from losing my pacer. I suspect I was experiencing a dip in energy as I’d not taken quite enough nutrition in lap one. It’s a minor point overall as the impact was minimal. Whilst slightly slower I’m more consistent and things pick up around 17km in. My plan was to up pace from 15km and honestly I tried, but the real impact of this didn’t start till the 17K point. I then matched the first lap without the benefit of a pacer.

Fatigue is developing in the final lap (red) although I felt surprisingly good for that point of the race, far stronger than I can ever recall at the 20km mark. A slight waver in pace to begin, but then I made a concerted effort to push harder spurred on by the closeness of the finish line and a few of my competitors. The last 6km of lap three are all faster than any of the previous laps.

It’s hard to judge based off the dodgy distance markers, but for the last few kilometres I dropped the pace below 4 minutes. I knew I was moving at that point and really just doing my best to keep pace as high as I could. I’d not read too much into the pace values in the chart the main thing for me was I could finish that strongly. There was still a lot in the tank – a very positive sign for Kona.

That’s a lot of analysis for a single leg of a race. I went into that race to learn and the only way to achieve that is scrutinising the results. I could come away and say it was a fantastic race and clearly my running is in great shape, but with six weeks I want to get every last improvement I can.

The course in Hawaii will be hotter and is far more undulating which will impact the time. The question becomes how can I minimise this impact and get as close to that three hour pace as possible. It’s hard to replicate the heat and humidity in the UK especially as summer seems to have failed on us. The terrain is a different matter.

I need to focus on selecting undulating and hilly courses and working the uphills hard. I’ve never really felt they were my strength so inroads here could make the Queen K much more comfortable. Last year I tried to push the pace on the return to Palani only to blow as I hit the top of the final rise. Concerted, structured hill reps and bounding to develop strength will be the focus.

Getting past my current injury is the other big issue. Massage from The Tri Touch identified a nasty little knot/strain in my left calf. It’s slowly clearing through a process of stretching, massage and rehab. I’ve started using cross training machines to work the legs along with some running specific weight work. Though it feels better every day I’m sticking to plans of no running this week and then reassessing. Better to be 100% than risk further damage.

When I’m past this problem I’ll start with an easy week of frequent runs and from there look to build up volume week on week. I’ll be aiming at a lower target than 160km in a single week – no more than 120km running per week this time. That’s still significant and the most important aspects to maintain will be having a quality long run, hill session and some pace work at and above race pace.

Once I’m out in Hawaii I’m planning to execute some decent run training in the first few days. Last year my run taper was sharp from 14 days out I never felt I could run well. This year I want the time and experience of some running in the heat. The main thing is I’m doing nothing too hard within about ten days of the race.

The next test now is how I return to running once my calf has healed. I’ll be interested to see how pace and feel come back given my body weight is largely where it was pre-race. From there it’s hard work with a little more emphasis on injury avoidance through to the taper. The final test comes on October the 9th when I’m out running on the Queen K.