The Approach to Winter Run Training

The last blog raised questions around my winter running plans. I put my thoughts into the public domain, I think it’s perfectly reasonable for them to be critiqued. It’s not the first time I’ve had to justify the way I’m choosing to train. In this case the questions centre around my high volume winter run focus.

On the road to Kona I adopted a Lydiard style high volume approach resulting in a notable run performance at the ITU Long Distance Worlds in Immenstadt. Around the race I also developed an injury that plagued the rest of my preparations and ultimately led to a disappointing run. The simple conclusion is high volume running leading to injury leading to poor performance.

It’s my belief that the injury was not directly volume related. My training logs note the first sign of problems at the end of a recovery week, seven days after my run block. The injury worsened from this point peaking during an easy club run shortly after Immenstadt. You can’t rule out the contribution of high run volume, but neither can you explicitly state a causal link.

If I believed run volume was the cause then repeating the approach would be wrong. There’d be a huge argument to repeat the training that saw me run well in Roth, Ironman UK and Hawaii. Given it worked then why not follow it now? I agree with the suggestion that you need to stick with an approach to fully reap the benefits, but you also need sufficient progression to make real improvements.

A long Season of Running 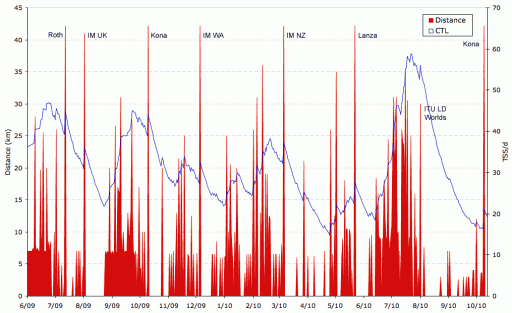 Fourteen months have seen a lot of running and racing. The graph above shows that run volume by distance in red and compares it with run fitness (CTL) in blue. This time period contains a mix of run racing from highs like the ITU Long Distance Worlds down to this year’s Kona. You can see the volume and frequency of training during each build along with its impact on my CTL.

Consistency and moderation were the back bone of success in 2009. Running in the build to Roth and Ironman UK can be divided into two categories a long run or a thirty minute run. I worked to a rule of a minimum of thirty minutes running for thirty consecutive days. For Kona ’09 I returned to this approach with two peak weeks seeing jumps in volume as I regularly went beyond the minimum.

The next three Ironman races disappointed while I placed well I never felt I delivered a performance I should. There’s erratic amounts of training, irregular days off and occasional attempts at more extreme volumes. I was ignoring my own rule on the importance of consistent training.

Run volume alone presents a simplistic picture so I’ve also included CTL. Immediately it’s obvious that each of my ‘good‘ races have higher CTL than the disappointing ones. The moderate, consistent approach resulted in steady growth of CTL through regular training load. Inconsistent training never delivered comparable weekly training loads and growth in CTL was poorer for it.

Moving to the right side of the chart the build to Immenstadt was consistent with greater volume. Daily thirty minute minimums are replaced with increasing amounts of running. Combining consistency and volume of running resulted in higher training loads and rapid growth in CTL. I ran well in Germany because the training had built significant levels of run fitness.

It’s not that 2009’s consistent, moderate running didn’t work, I don’t think it can develop my run to take me sub-9. That’s the goal and the coming season’s training has to be focussed towards that.

The two month block before Immenstadt resulted in a run averaging 20 seconds per kilometre faster than Kona ’09. Though the race was shorter on bike and run that’s a significant difference in pace. Without power files for either race it’s impossible to truly measure intensity, heart rates suggests I rode harder in Germany. Comparisons have their problems, but I feel it helps justify higher volume running. 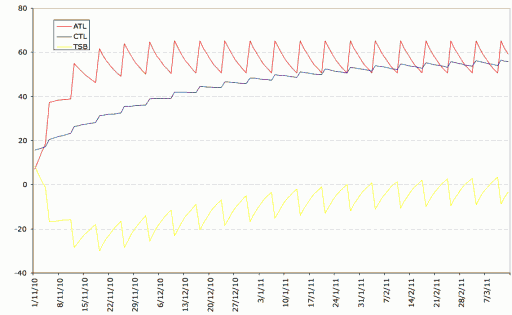 Supposing I adopted the Roth approach again, thirty minute runs each day, one run longer and possibly a weekly race. Simulating my winter’s Performance Management Chart (PMC) above there’s steady growth through till late February when I approach a plateau. CTL levels would be close to Immenstadt levels with a very gradual ramp rate. There’s the potential to deliver a good run performance over the time frame. 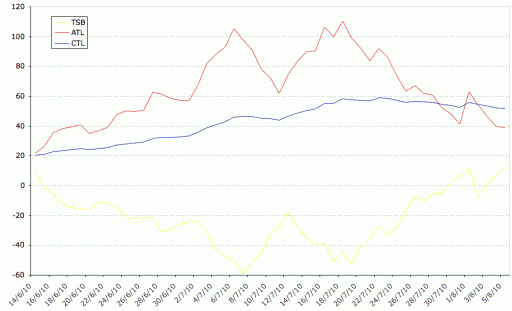 The PMC before Immenstadt presents the other end of the spectrum. The level of CTL achieved is higher and the ramp rate is extreme (scale might not make this obvious). In a month I’d plateaued unless I continued with high volume running and increased intensity of sessions. Were I to jump into this approach again I could see a similar level before the New Year. 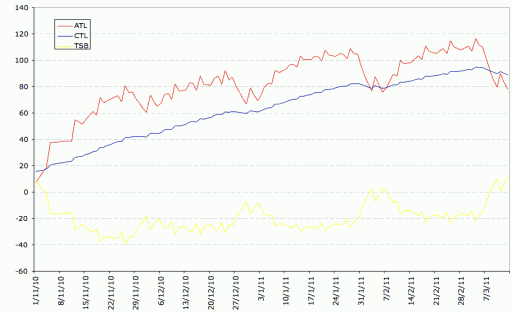 I’ll be aiming for higher volume, but I’m planning a more balanced approach. Another simulation of a winter run PMC this time with consistent running and growing volume. Every few weeks I take a recovery week then increase volume of running and training load. Fitness still plateaus towards the end of February, but at a much higher level hopefully in time to PB at the Reading Half Marathon.

The winter run plan retains the consistency that’s present in all the best run training blocks. Starting with the simple thirty minutes minimum as Roth it grows to the volume of Immenstadt over four months. I’m unlikely to reach the same volume, a hundred miles of running is interesting, but not specific for Ironman.

This isn’t radical or revolutionary. It’s simple consistency with progressive growth in training load. Intensity will come in time, but I won’t work on that till 2011 once I’ve established a period of good running and feel my legs are ready. Every training program has risks, presence of mind and a willingness to be flexible are the best ways to avoid them.

The progression isn’t set in stone, there’s no requirement to run x miles in a week. I’m willing to adapt to the reality of the training load adjusting the plan to ensure consistency above anything else. I won’t achieve my Ironman goals following a moderate strategy even if it may be the ‘safest‘ option.