Pacing for a Hilly Ironman

Ironman racing is simply a matter of managing pace and nutrition over the course of a day. You work at an intensity you know you can hold all day long. It might take concentration, at times it might be hard, but you’re sure you can manage that effort. You’re certain because you’ve followed my advice and practiced it in training: the work feels familiar. Despite the simplicity so many go wrong and struggle through the marathon.

The bike is where the biggest errors occur. You feel fresh from a taper and set out at too hard. It feels good, at least for a couple of hours. Eventually it bites and the only thing that can happen is you slow. Once down that route it’s hard to recover. Putting a cap on intensity can save you from walking the run. It doesn’t matter if the cap is defined by power, heart rate or perceived exertion; what’s important is you stick to it.

Capping intensity is easy. You see a power or heart rate over your cap: you ease up. If it feels harder than it should: back off the pace. Train for this so you know what it feels like and what numbers work. Simple!

It’s straight forward until you hit the hills. Unless you chose to race in Florida or Western Australia they’ll be some climbing. St George, Lanzarote, Nice: the right (or perhaps wrong) course and the ascents are significant. The bike route may necessitate working beyond your self-imposed cap. How do you pace a race when the hills take you out of your comfort zone? 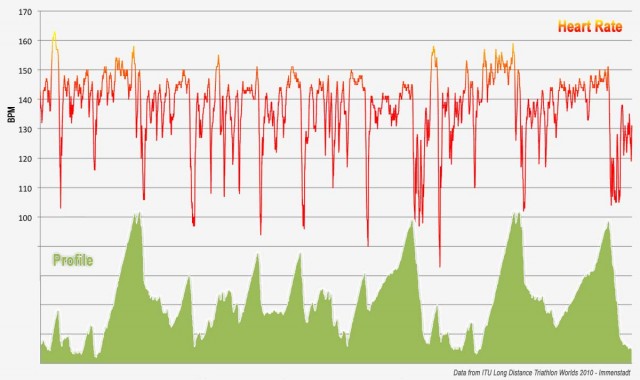 Immenstadt wasn’t an Ironman, but contained enough brutal climbs to make 130km feel like one. Climbs were rarely long, but they were decidedly steep. My normal cap of 150bpm frequently became the minimum needed to crest a hill. Bursts of intensity take a lot out of the legs; I was well aware my quads could be suffering by the run. Downhills allow some recovery, but not enough to compensate for frequent surges. Besides easing up too much downhill is giving time away.

The German course was two laps – the first slightly longer than the second – both with significant climbs. I attempted to hold back on the first and push the second harder. A strategy that works well. Early on people rode by, but I caught most of them before the run. A test ride had confirmed it would take more than 150bpm on the climbs so I set myself a secondary cap. When there was no way to get below 150 (short of getting off) I’d ensure I stuck below 160.

I broke my rules on the first hill! Excitement as spectators lined the road. Fortunately we lost the crowds and I saw sense. For the rest of the race I was more controlled. I rode flats and downhills like any other race, keeping the effort in control and the heart rate under 150. I worked slightly harder than average up shallow hills. Intensity was close to the limit, but remained under the primary cap. On the steep climbs I had to cross the line and work harder. I emphasised keeping heart rate and effort as low as possible.

There was always the potential for a hill to necessitate breaking the secondary cap. A bit steeper still and it’d be out of my control. The caps are guidelines: set points to keep it simple. What I’m seeking to do is spend the shortest amount of time working above my sustainable effort. I know it will happen, but aim to minimise its impact on the race. In the same respect I avoid easing up on the downhills. A generally even pacing strategy with slightly more work on the uphill sections.

At times it felt slow. Athletes came riding by, but controlling my effort lets me sustain my pace for longer. Power up the hills early and they’d feel like mountains later. Surges in effort come at a price if I crossed that line too many times my race would suffer. Holding back well in the first lap let me gamble on pushing the second. It was a risk, but trusting in my run fitness I was willing to take it. I had to be sure I could handle a few more hours racing even with the extra efforts.

The rules are identical for the run: have intensity caps. The numbers or feel may be different, but the principles remain the same. Above this intensity there’s a high risk you’ll slow before the line. Below it there’s the chance to pick things up and finish strongly. I judge my performance by pace, but I’m aware of its limitations on a hilly course. I’m trying to control the work I do; 6:30 miles are significantly harder on a 5% grade. My preference is for perceived exertion. I’ll strictly keep my efforts under control until I’m approaching the end.

As with cycling I allow for an increase in exertion on hills, but limit how hard I go. Downhills present an additional challenge. There is free speed, but the eccentric loading does more damage to tired legs. I’ve rarely ‘raced‘ down hills; I’ve used them to settle my heart rate after a climb. A moment to ease intensity, recover and pull yourself together for the remaining miles. However tempting it is to fly down them I hold back and keep my run together.

On a good day there are no rules for the final few miles. Just push, you’ll make it to the line. Even then pacing on hills can still matter. Out in Kona a couple of miles from the finish I pushed from the bottom of the final rise to Palani. A short climb, but after 24 miles I felt every inch of it. I went too early and too hard; by the top my legs were gone. Had it been more than a mile to go things would have turned very ugly! Late in the day, but a clear demonstration that going too hard comes at a high cost. It wouldn’t have gone so well if I’d ten miles to go.

Athletes tend to let hills and harsh conditions psych them out. Everyone faces the same course on the same day. A flat course can be just as challenging as a mountainous one if you pace it correctly. Both should be raced at the hardest effort you can sustain for the duration. The hills will slow you, but they’ll slow everyone. You may spend longer racing and that does mean holding back a little more, but so should everyone. Controlling and managing your effort over the day so you finish strongly will serve you well.

Hilly or flat, it’s the way you manage your race that will make the difference.