In the dining room at Pyrenees Multisport hangs a board of the best times ascending the Col des Ares, a short climb used to test performance. I am not on the board, my fastest effort doesn’t come close. I could make excuses – too heavy, too tired, too short a distance – the fact is that while I consider myself a strong cyclist, there are plenty of stronger athletes. When it comes to twenty minutes all out I am comfortably out ridden. It frustrates me.

My training camp in the Pyrenees was a week of contrasts. Whether it was climbing through Andorra in burning sun only to descend into France in freezing rain, or the daily demonstrations of how cycling has progressed only to see how far I have to go. I worked hard in the mountains, every day was exhausting; seven days after the fatigue lingers in my legs. Big training needs big recovery, but it will deliver results.

I’m satisfied with the way I rode, but disappointed with how I trained. As fatigue grew I did minimal swimming and soon stopped running. I was a cyclist. In the context of August’s Epic Camp France, a trip involving long hours training in the Alps, it was striking how tiring mountain riding was. Can I really expect to be ready in August? At each Epic Camp I’ve attended I’ve set a goal of being stronger than before and performing better in the points game that motivates us all.

Conflicting sensations – feeling fitter, but not fit enough. As my body slowly recovers I’ve contemplated my progress and desire to reach ‘the next level‘. A poorly defined region of performance – something beyond previous achievements. Better swim, bike and run. I’ve written about my intentions for a few years, but am I really engaging in the process? Following Ironman Austria it was clear the front of the pack is getting faster; I need to up my game.

I watched my athletes race superbly in Klagenfurt with a hint of jealousy at their opportunity to perform. I chose to pull out because I knew I wouldn’t be close to the level I wanted. Difficulties with running and a demotivated winter; training is not on track. It was a financial decision wrapped in the guise of long-term thinking; perhaps I was weak for backing down from the chance to race. I wasn’t ready, but I wanted to be there on the day.

I’m untested – believing I am fitter, but not fit enough. I have no idea where swimming is, the situation is that bad; my only clue is the fatigue from two kilometres at a steady pace – I’m not ready for an Ironman. I am able to ride faster and harder than before, I’ve repeatedly done so in training and want to test it properly. When I run there are glimpses of potential, I cruise four minute kilometres during technique sessions, but have so much to build before I truly race again.

Time to be serious, to stop toying at Ironman and focus on the work I need to do. I know what it will take to reach that next level, but I’m lacking the drive to put it into action. Complacency remains and I’m happy to be fit rather than fittest. I create obstacles; recovery and a need for quality become excuses, transforming a hard workout into an easy session and then to rest. Sometimes you need to just train.

Time to start racing. I want the motivation that comes from falling short of my goals. Let me see how far I have to go and I’ll double my efforts.

The Outlaw Triathlon is a fortnight away – I’ll have my test. I’m afraid of the outcome. It’s been seven months since I last stood on a start line and training hasn’t been textbook. Race day may bring failure and with it, I hope, the motivation to put me back on track. 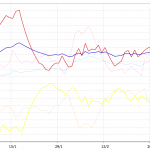