If you are unfamiliar with terms like Training Stress Score or Performance Management Chart then much of this post will go over your head. I want to close Epic Camp with a look at the numbers behind the training. I’ve written extensively on how camp progressed and how I felt, but never had time to discuss the impact of that training and the data I collected. Epic is both an experience and a training camp after all; I know from previous camps that I’ll see the benefits in a month’s time.

I’ll start with the simplest measurements – duration and distance. The emphasis in the Alps was on the bike, so whilst the camp involved swim, bike and run, I’ve focussed purely on those numbers. Over eight days I rode around 1070 kilometres (665 miles) with a total ascent of 20,000 metres (65,600 feet); all this was done in 44.5 hours. In terms of hours or distance that’s one of my biggest weeks, the ascent is well beyond anything I’ve done before.

The numbers that interest me are those that give some indication of how I was training. I was fitter for this camp than before and I knew I was riding harder too. I chose to work on the front of the group to push myself and gain the largest benefits. To an extent every camp I’ve been on has felt like this – I arrive fitter and believe I’m working harder than before. Comparing the distribution of power over the camps shows that I really was working more in the Alps 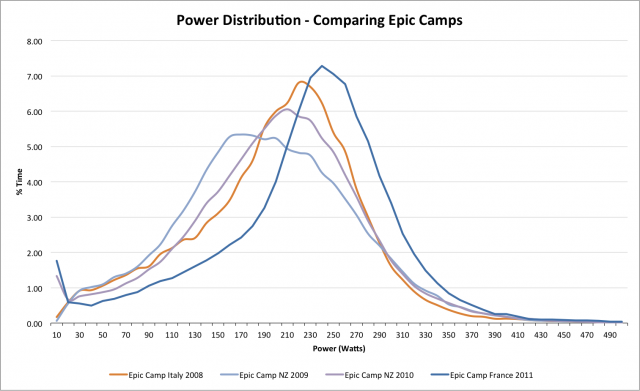 There is a very strong shift right over previous years. It’s interesting to note the two camps in mountainous terrain tend to be skewed right anyway, whilst the New Zealand camps have a broader spread of powers. Mountains make you work – there’s no where to sit in. On the New Zealand camps, whatever distance was covered it was easier to find shelter and reduce the strain. In France I went to the front, working hard between the climbs as well as on them.

I prefer to consider my training in terms of load measured as a Training Stress Score (TSS). The top line is a total TSS of 2200 over the eight days; to place that in perspective a hard week of cycling might see me approach a total of 900 TSS. Epic Camp always involves a significant overload and the year’s Performance Management Chart shows this. 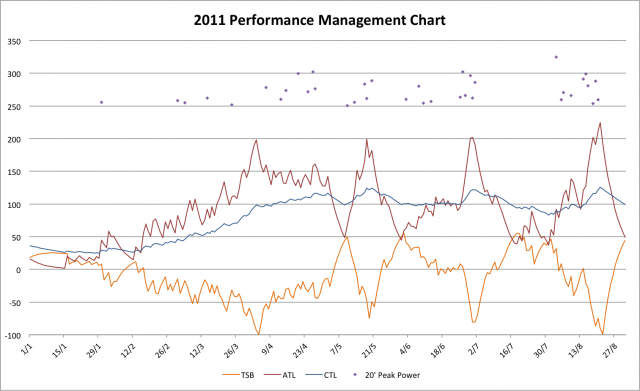 2011 has seen a gradual build in bike fitness (CTL) – a steady increase starting in February and culminating in May. During that time there was a single week of overload shown by the spike in fatigue (ATL) and dip in form (TSB) during early April. Since May my CTL has largely stabilised at just over 100, more than enough to drive development.

There are three notable spikes after the start of May. The first was my fortnight in Lanzarote, containing a ten day block of quality cycling; the second was my trip to the Pyrenees for a week of work in the mountains; the final, biggest spike is Epic Camp France. Despite my level of fitness, the training load was sufficient to reach the highest fatigue of the year. TSB dipped heavily, significant recovery is required before I can train well again – four days after and I’m still tired. 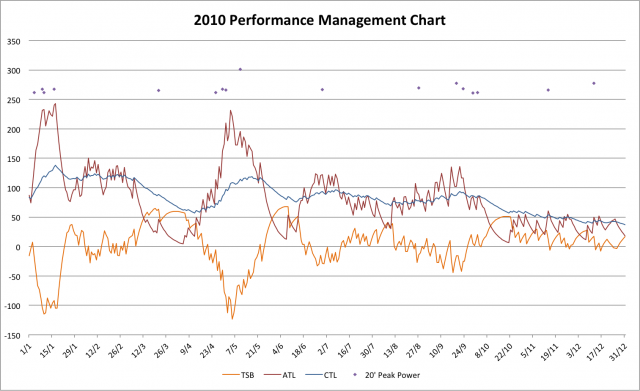 For comparison 2010 saw an initial peak built around the length of New Zealand Epic Camp. Sixteen days of training that didn’t produce notably higher fitness or fatigue; greater volume at a lower intensity. The impact of that camp took a month to hit, but when it did the jump in performance was notable. Much of the rest of the year was spent below 100 CTL, the exception being another Lanzarote camp in May.

Huge training camps that dig deeply into fatigue take a long time to properly recover from, but the impact on fitness, if correctly managed, is huge. Race too close and without adequate recovery leads to poor results, allow sufficient time and you can feel the benefit. It’s fair to note that in both 2010 and 2011 extended periods of high CTL led to solid development on the bike. September 2010 was a period of strong riding even though the rise in CTL is comparatively modest.

This week is a write off. I took my first ride today – a leisurely cruise to a local cafe for coffee and cake. My legs felt heavy and sluggish and the power meter wasn’t worth looking at. I sleep heavily, but still feel tired, I’ve hints of a cold and nothings feels 100%. I’ll keep things simple for now – train as I feel. The peaks achieved on Epic Camps are unsustainable, some of the fitness has to be given up before I can build again.