A month after my first visit I was back at the Freespeed studio, this time with a new bike in the back of my car. It had taken a while to finalise the details, a number of frames would work for me – the Trek Speedconcept, a Cervelo P2C or a Blue Triad SL among them. After some debate I opted for the Blue. It was as much an aesthetic choice as anything, all three could fit me, but the Blue would stand out.

Choice made, Richard went to work, going so far as to discuss sizings with Blue’s owner at the 70.3 World Championships in Vegas. He made absolutely certain this was the right frame and the right size for me before we took another step. After a couple of weeks the decision was made and an order was placed. I patiently waited for my new bike to arrive. 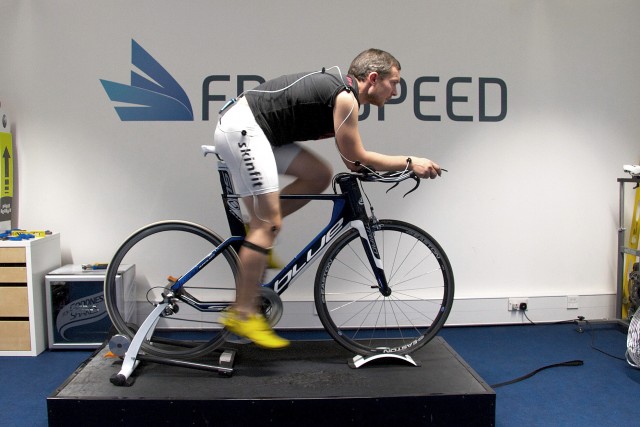 Before I could ride the Blue Triad SL there was one more step to go. The bike had been assembled uncut so Richard could fine tune the coordinates from the previous fit. This meant another three hours of work, testing my position and the angles it produced throughout my body. Once again I was fitted with the Retul system and went through a series of test runs as we tweaked the previous results.

The aim of this project has been to improve my aerodynamics for racing Ironman. The move from road bike to tri bike made this relatively easy – it was inevitable the new, lower position would be more aerodynamic. Lower is better, at least until it closes the hip angle and impairs the power you can generate. The Blue Triad’s steeper seat tube allows a lower front-end while keeping the hip relatively open. There are still limits, I am as low as I can comfortably go with my saddle set at 80 degrees; we started slightly lower, but it didn’t feel good. Pushing the seat further forward to enable a lower position would likely compromise handling.

After a couple of hours of trials we achieved a position that works for me. Both steeper and significantly lower than my old position; my back angle has reduced by over 10 degrees. It is comfortable, the fact I’d not ridden a steep tri position in a long time had to be considered. I simply didn’t feel comfortable when the front end was lowered any further. The real benefit of the Retul system was how quickly new positions could be tested and adjusted. Richard could take precise measurements of body angles and input on how I felt to adjust towards my optimal setup. This is an ongoing process. Now I’m testing the position on the road, adapting to it and getting comfortable. We deliberately allowed plenty of scope to move the front-end further down, but before I play further I want to get used to that 10 degree lowering of my back and the 4 degree steepening of my seat.

The first ride outdoors was tense. Everything about the bike felt odd, not helped by one or two slightly loose bolts. I returned home concerned that it was unrideable on the open road. But I tightened things down and persevered. Day two was a revelation – my nerves vanished and I settled into the new set-up. It was comfortable and certainly gave the impression of being fast. I watched power and heart rate, trying to gauge how they’d changed; I felt I was going faster for the watts, but at the same time my heart rate was slightly elevated. Either way it was exhilarating and riding the Blue just encouraged me to push a little more. With two rides under my belt I’m confident this will ride well in Vegas.

Whether I have found my perfect tri bike is an open question. I have found a bike that fits me and I can ride comfortably. I have also found a position that is a significant step forward over my previous set up. The real test is to come, racing in Vegas will let me know how well it works. A winter of training and adaptation to the Blue may see further adjustments for the coming season.