I wasn’t there, but I’ve spent more time analysing Kona data that in previous years. Following my look at Nick Baldwin’s incredibly controlled race I received four more power files from my friend Roger Canham. Roger has raced in Hawaii every year since 2008 and wanted my view on the power data over that period. He’s been incredibly consistent with finish times falling within minutes of each other, and placing as high as seventh in his age group in 2009. 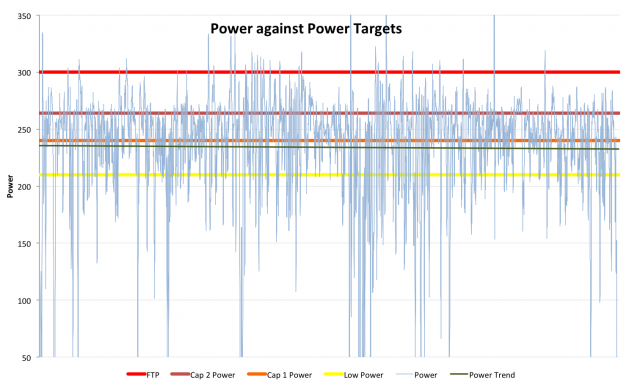 Another text book example of pacing, average power remains consistent across the entire day. There is a little more variability than in Nick’s race, but the difference isn’t huge. What does stand out is the pacing strategy – Nick races at 75% of his FTP, Roger has raced around 80% of his FTP every time. I raised Cap 1 in the chart to reflect this intentionally harder effort. 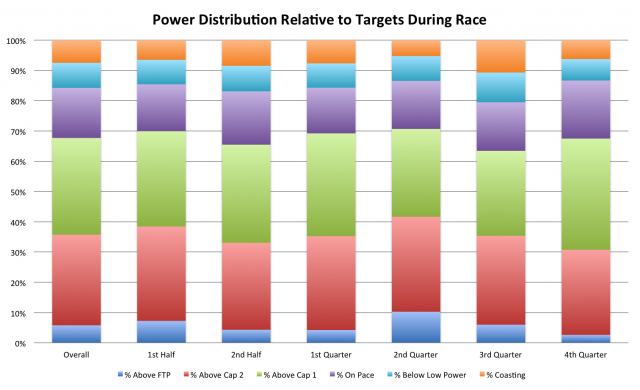 Breaking out the percentage of time Roger spends above each cap we can see that 65-70% of his time is above that 80% of FTP point. He consistently holds this over the ride with little real drop off, any decline in the third quarter is likely a result of the descent from Hawi. And he ran well afterwards – feeling in control and reducing the gap on the age group winner. The whole race was controlled, but his pacing strategy was more aggressive than Nick’s. 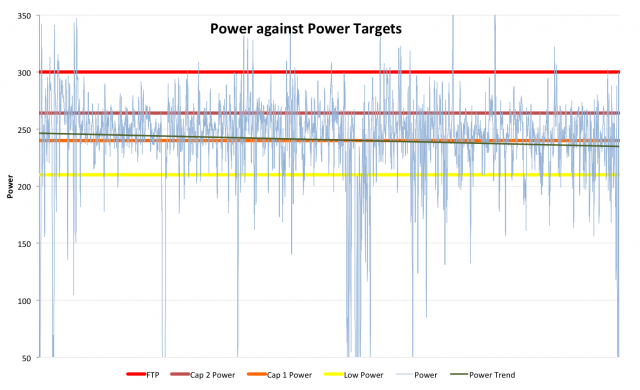 Roger’s first trip to the island wasn’t that different. There is a little more decline, clearly he pushed harder in the early stages of the race, but it’s still well controlled. Again he’s working at around 80% of FTP, but he runs well enough to finish in 9:47. Roger’s strong run allows him to push the bike more and hold on for the marathon. 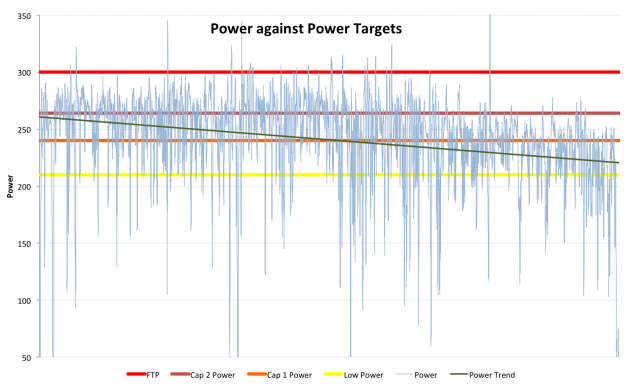 The second trip to Hawaii was a different affair. There’s a significant decline in power over the course of the race. Overall he managed the same average and normalised power as in 2008, but achieved it through an excessively hard first half. This can clearly be seen in the power distribution below. 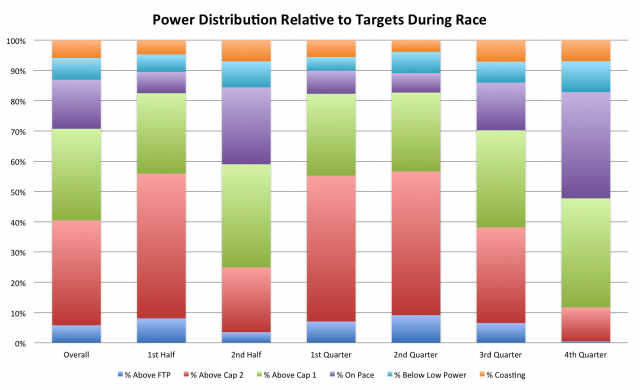 It’s worth noting Roger still finished in 9:46 and seventh in his age group. The pacing may look poor, but once again he ran well off of it. I remember running with him along Ali’i Drive until he dropped me a few miles in, the rest of the race all I could do was hold him one minute ahead. The result was good, just not achieved in the way we might expect. I would much rather see the flatter profiles of 2008 or 2011, whether that would have resulted in an even better performance is another question. Potentially his run was aided by recovering at the lower power of the final quarter. 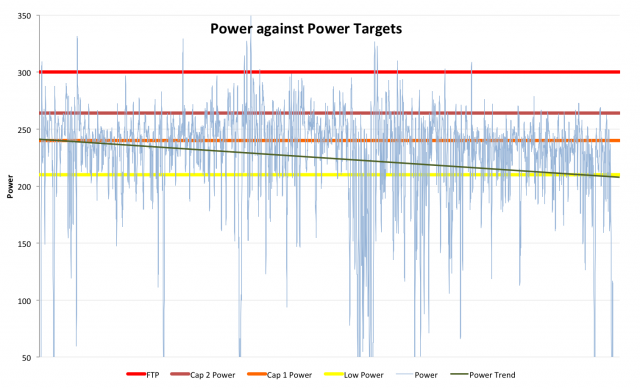 Again the power trends down, but this time it doesn’t start as high. This is his lowest power year in Kona and the only time Intensity Factor (IF) drops below 0.80; variability was up and power down. A fade like that would typically suggest that an athlete worked too hard to begin – the effort was unsustainable. 2010 stands out amongst the other files as Roger never seemed to be up to working at his usual level. 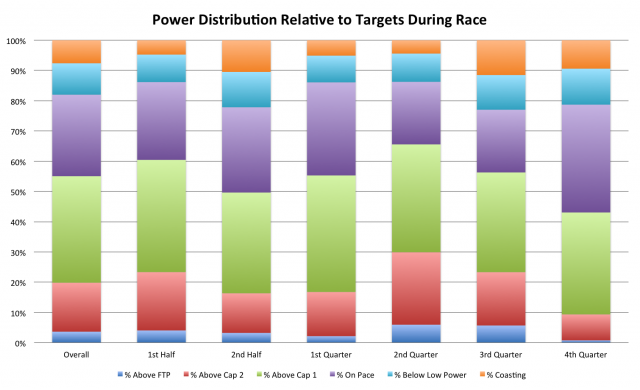 The first quarter was sensibly controlled, then things pick up in the second with the climb to Hawi, after that he never manages to sustain that effort, the final quarter appears to be far weaker than in previous trips. Whatever affected power output on the bike was recovered on the run and he ran to a respectable 9:50 finish. Again a weaker final quarter may have kept him fresher for the run.

There is remarkable consistency in Roger’s performances, despite changes in the details. Top level power numbers haven’t changed much other than a dip in 2010, but the quality of pacing has and this year saw no real decline. Holding an effort that trended just below 80% of FTP worked and set him up for a new Hawaii PB. The data looks good and given he can run well off the back of it 80% seems a reasonable target to use. There’s no real scope to race at a higher intensity so the next step has to be raising FTP and having more power to work with.

Roger’s position reminds me of my own – we know how to race, all we can do is keep working to raise our power and pace.