Eight More Days of This?

On balance I suspect this camp will kill me. The first day of riding, a simple loop with two climbs – two big climbs – had my heart rate through the roof and my legs exhausted. I’m fine on the flats, unfortunately I’m in a region defined by its mountains. Definitely the stuff to make me stronger, but the odds of surviving another eight days seem slim. Today is likely to be slower – no matching previous, better trained, Strava times.

Travelling without my bike – still broken as I hunt for a now obsolete Dura Ace RD-7800 rear derailleur – was a distinctly pleasant experience, one I’d like to repeat. The cost of hiring one of Pyrenees Multisport‘s bikes for the week was small in comparison to the hassle of travel with my own; put the pedals on, adjust the saddle and you’re off. But as I rode the slightly too large – my size is all on loan till the weekend – Rose bike up the steeper portions of the Port de Bales I began to appreciate that there’s no bike like your own. I quite liked spinning the compact gearing, on the flat the bike was a pleasure to ride, but uphill the difference in size came into play and I felt the odd niggle in my back and the slightest twinge in my knees.

Over the top of the Port de Bales, after a brief stop to catch my breath and lower my ridiculous heart rate, I longed even more for my familiar Look. It’s not that the Rose bike isn’t good, it’s very good, it just isn’t mine. My already sketchy descending was multiplied by a factor of ten as I tried to develop a feel for the handling and remember that the front brake is on the left, not right. By the bottom, in Luchon, I had learned to gently squeeze the left lever with more force through the right, and the wide wheel base below me no longer felt so cumbersome. I still descend like a brick. 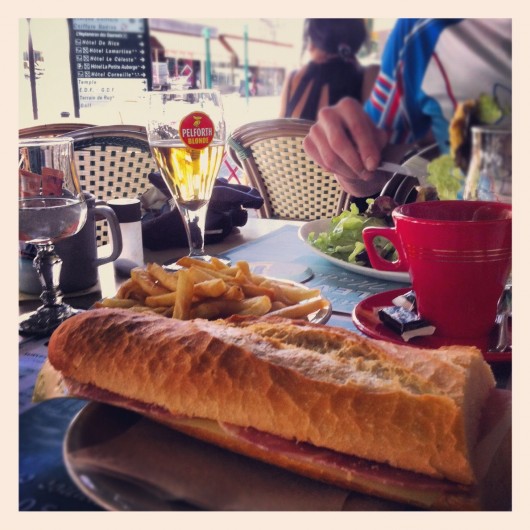 Lunch in Luchon was a leisurely affair. Sandwich and frites, after the last couple of hours I needed a lot to get me over the Portillon, that I’d foolishly committed myself to; what had me say, “yes.” With no obligation to rush Steven and I enjoyed a second coffee, settled the minuscule bill and hopped back on our bikes. Nine kilometres from the Spanish border the climb began, Steven was out of the saddle turning over his larger-than-usual gearing, I slid my chain down the block and began to spin as he shot off into the distance. This was going to take a while.

Many Pyrenean climbs have kilometre markers informing you how much further it is to the top and then misleading you about the average gradient ahead. Not the Portillon. The tree lined road give you no clues as to when it will end until a three kilometres to go sign appears, then you spend fifteen or twenty minutes hoping the next turn will be the last and you’ll see the summit. I split my time between trying to guess how close I was, and wondering why my heart rate was so stupidly high and whether I’d make it to the top. I did, Steven was sat waiting in the shade.

Weather changes quickly in the mountains; by the time we’d dodge all the potholes on the descent into Spain the roasting temperatures of the ascent had been replaced by strong winds and fierce black skies. It looked like the downhill back into France would be a long, wet slog. We silently took turns on the front, pushing hard, maintaining the pace in the face of strong winds. The work was a slog, but strangely enjoyable as we closed in on home. With a gentle, favourable gradient and the headwind I felt more at home time trialling than climbing – this was something I could do.

Despite stiff legs Steven and I took in a short run around the local village to finish the day. Then we settled down for the evening; plotting the riding for day two – three climbs this time, a longer route. I wondered if I’d survive another day.