Currently my Twitter stream consists of an interesting, and distracting, debate on Ironman pacing, I’m trying not to let it divert me – not too much anyway – because while pacing is the topic for today’s blog I’m taking a different approach. I won’t be offering the standard guidelines of 75% of threshold, about 10-15% slower than your marathon pace, or any other variant you may have read (possibly on these pages). Though I will be using them as the basis for a project that takes the work I’ve done in analysing race data and uses it as a means to plan race strategy. Yes, it’s more graphs and data, but this time I’m looking forward rather than scrutinising the past.

The starting point is the advice I typically give to athletes racing with power. Two power caps to race by: the first applying for the majority of the race and set at 75% of their Functional Threshold Power (FTP), the second applying when climbing and allowing them up towards 85% of their FTP. They are not targets, the objective is to keep power below these numbers as appropriate during the race; an athlete should hold their power close to the first cap, only resort to the second cap when the gradient rises and then endeavour not to cross that line. In practice power is variable, but a well executed race usually display this form of control. There is room to work harder during an Ironman, but it needs to be measured and balanced against the rest of the race.

I have an athlete racing in the inaugural Ironman Mont-Tremblant and in need of guidelines to pace the hilly bike course. Fortunately he will be racing with power and – of course – I know his current FTP, estimated from test sets and race performances. So the simple version of the plan is two caps, the first at 203W and the second at 230W; this athlete can then aim to mostly ride around 200W, but allow himself to work closer to 230W on climbs. Easy. It’s also important he minimises time spent working above the first cap and recognises how pushing the bike too hard can be costly on the run – all familiar themes from recent weeks. However I want to do something more, to see if I can give a more detailed outline of how to race this course based upon its profile. 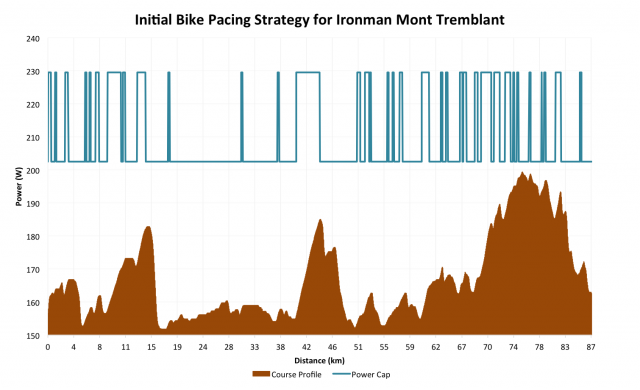 Knowing the profile – readily available from GPS – means I can predict which power cap will apply at any time during the race. I can apply a simple rule: if the gradient is above 2%, then power cap 2 applies. The result is the chart above, the undulating course produces a spiked power guideline, unusable on race day; and should he perfectly follow this plan, my athlete would average over 80% of FTP – too hard. If I adjust the gradient threshold such that 4% is the minimum grade for power cap 2, the result is the cleaner power guidelines below. 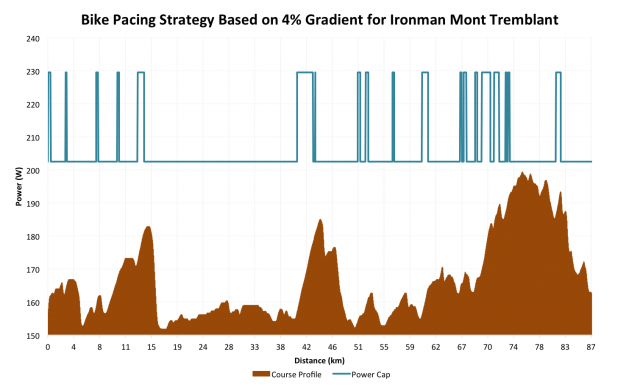 This chart highlights areas where we can be certain he can work harder and it comes in at a more reasonable, if still high, 78% of FTP, but it is still a touch too complex to use. The final step is to manually smooth the line, identify regions where it makes sense to maintain higher or lower power rather than briefly alternating between the two caps. By monitoring the change in average power and overall intensity as I make alterations I can attempt to bring the guideline within comfortable race parameters. 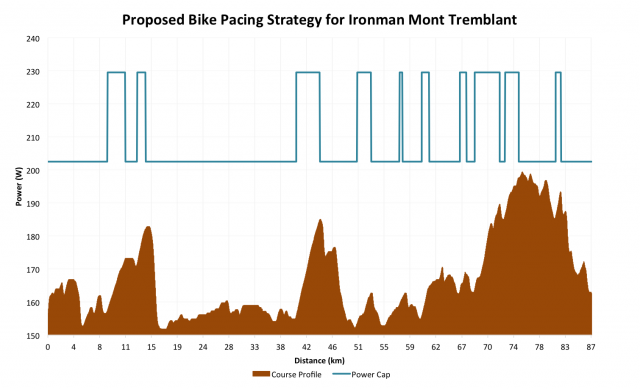 Still an aggressive plan. Simpler, fewer spikes, but averaging a higher wattage than I’m entirely comfortable with. The athlete is keen to push the bike, I’ve warned him of the risks and emphasised the need to view the caps as guidelines not targets. What happens on race day will depend on how he feels and how the final weeks of his preparation have gone. The power profile at least enables us to establish key regions to attack; for example, while he should push climbs between kilometres eight and fourteen, he should control his pace after that until kilometre forty. We can also see other substantial climbs where it would be worth pushing a bit harder, especially as the lap ends with a descent, power is likely to be lower.

It’s early days for this approach. It’s untested, but has potential. I don’t view it as the foundation of a race plan, just a step in their development, perhaps allowing better targeting of long bike sessions towards individual races. Race day itself remains more complex than two power caps, feel has to be factored in, it can’t be planned, the intuition to appropriately control effort develops with practice and experience. But this is another potential tool towards the refinement of race preparation.