Spending Sunday evening in a nice restaurant, with a couple of bottles of wine, and then on for some cocktails did not result in a very productive holiday Monday, but having spent the weekend busily tidying, sorting and ordering the house such that today I finally work in an uncluttered office space I felt we deserved some fun. Also, it provides the perfect starting point to respond to a recent suggestion I write about mixing alcohol with training, not that I justified the cocktails for research purposes. Nor did I train the following day, but that may just be the point. It’s curious to be asked my viewpoint on drinking as a triathlete when for the majority of my life as one I have also been sober. I can’t speak from experience on achieving peak Ironman performance while enjoying a drink; however, after a year spent compensating for ten years of sobriety, I have a better idea of the influence alcohol wields. 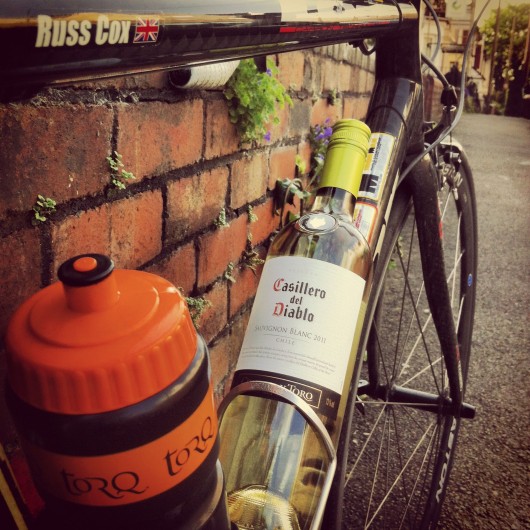 My abstinence had nothing to do with triathlon. I stopped drinking long before I entered a gym let alone a race, it was purely a matter of personal choice and taste and once you stop it proves remarkably easy to remain stopped. Of course when training became an obsession the choice is all the more beneficial because, if we are purely talking about performance, there is nothing that drink adds to the situation. We may regularly read overblown accounts of how consuming some form of alcohol – in limited quantities – has some form of health benefits, but let’s be clear: drinking alcohol brings no benefits to athletic performance. From that perspective teetotalism makes sense, it removes a potential detractor from progress as an athlete. The question is whether your performance is that important and your preparation that thorough to warrant total abstinence.

Sobriety is not a requirement of Ironman success. Drinking is just another factor in the equation, something to balance against the desired outcomes of training. It’s reasonable to assume that excessive consumption is not good for your performance, a recent Sweat Science post covered a paper on that very topic, but I see little harm in moderate consumption over the course of a week. There are three factors to be concerned with: volume, intensity and frequency. Sounds familiar. Where we might look to maximise how much, how hard and how often we train, when it comes to drinking we should – mostly – look to minimise these numbers. The UK’s system of Alcohol Units is neatly analogous to the concept of training stress I use to measure my training sessions – reducing volume and intensity to a single number; however I would need a few drinks before I’d be willing to digress further towards the idea of an alcohol Performance Management Chart.

Sunday evening, besides demonstrating a remarkable change from my teetotal years, was the alcoholic equivalent to a long brick session – a high stress event that inevitably resulted in me requiring recovery time. Were I training consistently at the moment, this would have been an interruption to that consistency. Contrast with my training camp in the Pyrenees where alcohol was frequently enjoyed both after and – as a coach I’m obliged not to recommend mid-ride beers, pleasant as they are – sometimes during training; the differences are both in volume and intensity. I drank moderately most days (birthday aside), often joking it was part of my recovery, and with that volume I was able to train well, consistently, becoming fitter over the course of the week. Perhaps it wasn’t optimal for my training, but I was well aware of the nature of my intentions – I wasn’t looking for a new personal best.

This blog could have been so much shorter had I simply opened with: everything in moderation. Abstinence removes any questions of the negative effects of alcohol on an athlete, and there are plenty: impaired recovery, impaired performance and impact on body composition among them. It isn’t necessary, moderate – low volume, intensity and not too frequent – consumption that does nothing to interrupt a consistent training schedule will have minimal impact for the majority of us. If you do decide on a heavy night of drinking, accept you’re unlikely to perform your best the following day. And should you be riding in France on a hot summers day, calling in at a cafe for a break, do not use me as a justification for a beer.