☰
Home > Kona > Getting to Kona

I wish I was in Kona. Obviously. Sat in front of my Mac as the office radiator gurgles to life on this bright, sunny, cold morning I want heat and humidity. More than that I want the atmosphere: days of early morning swims in warm ocean waters, then breakfast at Splashers or Lava Java – huge omelettes and endless coffees – followed by a ride on the Queen K, lunch in the village or rotisserie chicken from the Sack N Save, bumping into friends each time I leave the hotel, coffee, again, this time from Kope Lani, and finally dinner at Bongo Ben’s. Let others race, I miss the build up to the Ironman World Championship. 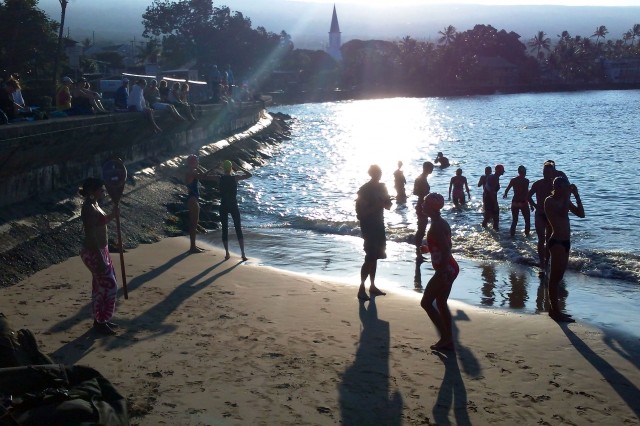 It wasn’t long after I discovered Ironman that I discovered Kona and inevitably set it as a goal. If completing an Ironman was hard then qualifying was harder and my motivation was in proving how far I could go. Not unusual in this sport. Translating the desire to race in Hawaii to actually being there was far more difficult.

Early results were promising; consistently under 10 hours, but in European races nine is more important that ten. Competition is harsh, athletes are strong, particularly men between the age of thirty and fifty, or most of us. Not that women have it easier, lower numbers mean fewer fiercely contested slots. To qualify on the continent takes exceptional fitness and a measure of luck. I mastered neither; good, but not good enough. At that point my approach diverged from the options available to most: I quit my job and focussed on training. An age grouper with the advantages of the pros, it made life easier even when I didn’t make the most of it. But, fortunately, for the 99% for whom this isn’t an option full-time training isn’t required.

Fitness is a necessity. It doesn’t matter how you – legally – get it, but you need it. The huge variation in Ironman courses makes it impossible to accurately quantify in terms of times. You can be a one hour swimmer, I was, but bike and run need to be strong. We are probably considering the five hour mark for the bike, perhaps a little below that, and after the capability of running under 3:15 at the outside. On the continent you’d expect to comfortably go below 9:30, better 9:20, and still not get a slot. At my point of qualification I had raced 9:20 in Roth, then, by chance, I picked the right event, Ironman UK. It remains the advice I give to would-be qualifiers: if you are fit, in top racing form, within Europe Ironman UK offers one of the best opportunities. The competition isn’t the same, you still need that fitness, but the odds are good. The downside if you do make it is you have two months to get ready.

Patience is a virtue. A rare few – like one of my athletes, Mike O’Brien – get there on their first go, most of us have to keep trying, practicing until that point where fitness, form and race selection coincide. It’s part of the lure, were it easy would I bother? There were numerous occasions when I questioned my choices, wondered if I’d ever actually have the race that earned me a spot in Hawaii. It takes patience to stick with it, repeating the training you hope will build the fitness to qualify, accepting another near-miss and refocussing on the next event. I know those who have given up, unwilling to keep banging their head against that brick wall. If you want to go be prepared to stick it out.

It doesn’t get any easier. At some point I’d like to return and race, if only to experience the atmosphere again. Watching events like Ironman Wales I’m under no illusion that standards are rising. Soon Ironman UK may no longer be the best qualifier and my loose estimates of qualifying ability may be far from the mark. Whatever timeline I set myself for a return to competitive Ironman I will need to be fitter and faster just to stay in the same place. Until that point I’ll live vicariously through Twitter, Facebook and blogs as others drip feed reports of their experiences back to the real world.