What happens when the consistency goes? For one of my athletes it’s a tough day of racing and a slightly unsatisfactory end to an otherwise good season. In this case Challenge Henley was a race too far; after a successful performance in Roth, Kevin was unable to sustain the training needed to repeat in Henley. The race analysis itself is simple – the graphs show an athlete off his game. In one case overall fitness helps compensate for pacing errors, in the other he is on his own. More interesting then this analysis is how we went from an Ironman personal best to what Kevin labelled a disaster.

Let’s start in Roth. Despite a 90 minute improvement on Kevin’s previous best time, this was not a perfect race. A swim of 1:14 was within expectations, the bike performance was more conservative than his FTP would suggest and the run that followed was slower than planned, the second half dominated by walk breaks. Based on an estimated 260W FTP the graph below shows Kevin never gets into his stride, showing a highly variable power output (VI often above 1.10) with an overall declining profile. Given the apparently moderate pacing of his race this fluctuation in power may help to explain the decline on both bike and run. Although for the latter it a running schedule hampered by an existing achilles issue could equally be to blame. 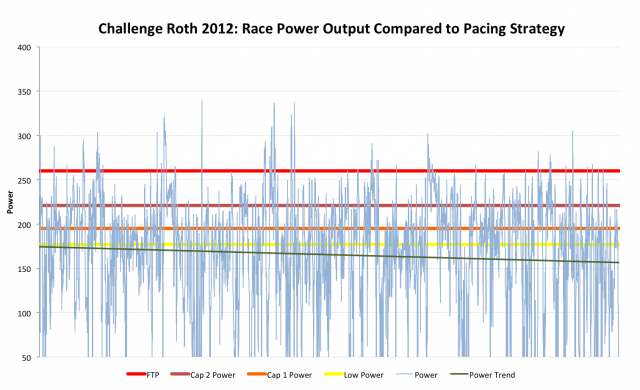 The overall result was positive – a personal best. However, the execution clearly allowed room for improvement. Nutritional strategy could be refined, consistency of pacing could be addressed; in theory these two factors could help deliver a better bike and run performance. We thoroughly debriefed in an attempt to identify all potential contributors to the decline in performance. I can’t rule out an incorrectly set FTP, when an athlete fails to reach targets this has to be a consideration, on my side I clearly needed to prescribe more consistent checks. we had 2 months to prepare for Challenge Henley and every confidence we could iron out a better race strategy. 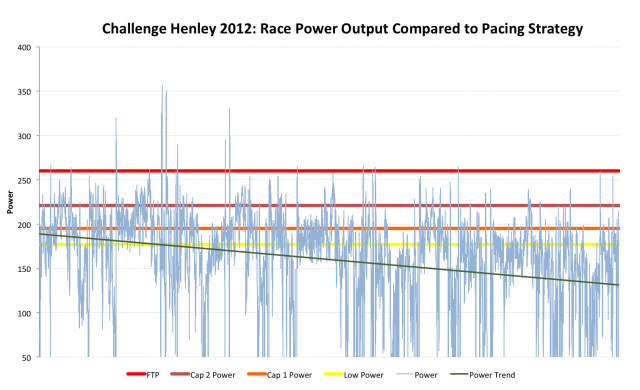 But what happened in September was more of the same. Worse. The graph above shows that although Kevin started on target, he experienced a more severe decline in power. His report matched the power profile: feeling uncomfortable from the start, unable to stay aero and then really suffering from about halfway. The data offered no specific reason for the failure to race, the response had been so immediate. If anything the riding was more controlled, less variable than before. Had something happened in the swim? It had been harder than in Roth, but sufficient to explain the rapid decline? I didn’t need to examine his run data in detail to understand why that had also failed to follow the plan.

Drawing a blank from the race data I looked back and reexamined the two months preceding race day. Following the debrief plans had been put in place to transition from recovery back to a short block of training designed to restore fitness to Roth levels and to practice race execution, but Henley proved to be a race too far. Kevin’s training was inconsistent, some initial success quickly fell apart as his motivation dropped. First the Olympics distracted him, then a period of illness derailed him and a break consolidated this. By the time we came to taper, there was little to taper from – a smattering of successfully executed rides and runs – very little swimming – over a two month period. Kevin was not race fit. At best he had maintained some form from his post-Roth recovery.

Roth had been the product of weeks of consistent training. While it hadn’t been perfect a period of 6 months preparation had done a enough to get him to the finish line in a new personal best. On reflection the decision to race again had been a mistake as the motivation wasn’t there to repeat the training cycle. Rather than building on success we stretched goals out without fully committing to the process. The signs were present in Kevin’s feedback and I tried to shift momentum back towards the race, but ultimately training has to be done for it to work. I’d already experienced this when I raced in Roth after weeks – months – of inconsistency; it doesn’t work.

There are lessons to be learnt on both sides. Kevin is taking a break, but will be revisiting Roth next season with fresh goals and a better appreciation of the importance of preparation, especially if he wishes to approach or even break 10 hours. And I need to be more emphatic in ensuring we follow the plan with clearer implications when we don’t. We cannot afford doubts around FTP or targets in training and racing; we need to ensure that run volume is maintained throughout the season, although achilles tendonitis makes this a challenge; we need to practice race strategy throughly. These are not new ideas, they have a place in a plan for a reason; it’s surprising how easily that can be forgot. Reviewing this season has been a reminder how important they are for both of us.