Who were the fastest Ironman athletes this season? Having transferred all the Ironman results from IRONMAN.com into my own database I thought the answer would be easy. I was wrong. It took hours rather than minutes to compile complete lists of the fastest swims, bikes, runs and overall times for pros and age groupers alike. Many results needed vetting to ensure times were genuine and the top 10 tables a fair reflection of this season’s racing. I’ll discuss the challenges in building these lists and the selection criteria later. First the results, the top 10 Ironman performances in 2012: 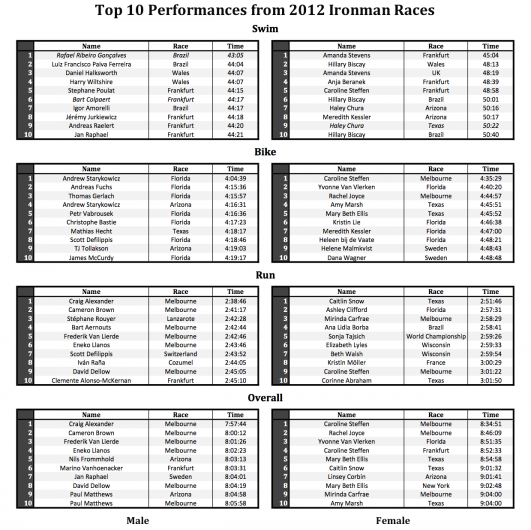 These are the fastest times recorded for men and women across the season of WTC events. While most of the athletes listed here are professionals a handful of age groupers made it into the top 10 – in the case of Rafael Ribeiro Gonçalves leading the swim – their names are highlighted in italics. We should bear in mind that courses will impact the times, there are races that lend themselves to faster swim, bikes or runs. Which leads me to Ironman New York – I made the decision to exclude this race from the top 10 swimmers of 2012. The Hudson’s currents had a significant impact on swim times, as the table below shows, had I included New York it would have owned the top 10:

I tend to focus on age group performance and results, seeing a few age groupers breaking into the top 10 swimmers I thought it would be interesting to compile a set of tables for the top 10 (and 20 overall) Ironman age grouper performances of 2012: 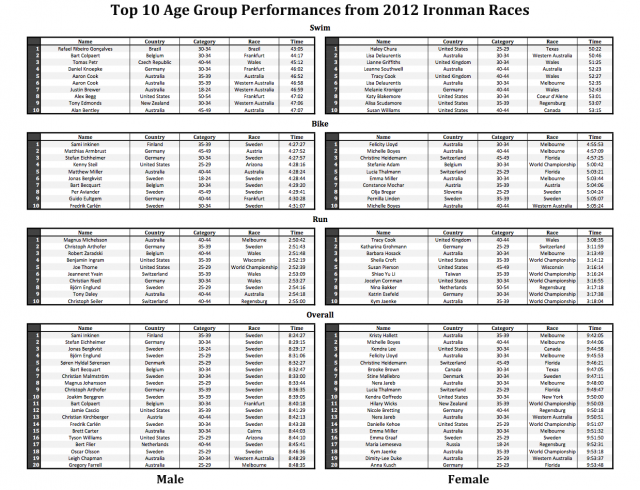 The criteria remained the same, New York was excluded from the swim, but among the age group results the quality of data was much lower. I removed obviously suspicious results such as 3:50 bike splits and 2:10 marathons; then I did my best to confirm the top results – checking the full splits for erroneous timings and searching Google for athletic histories. To the best of my knowledge the tables above are correct, but there is a risk that I have accidentally removed a legitimate result or left a bad data point in place. I am certainly more aware of the workload that will be involved in verifying all of the 60,000 records in the database.

Every so often familiar names cropped up among the age groupers, friends I’ve raced alongside; I decided to compile a set of tables for the top 10 (and again 20 overall) British Ironman Performances of 2012: 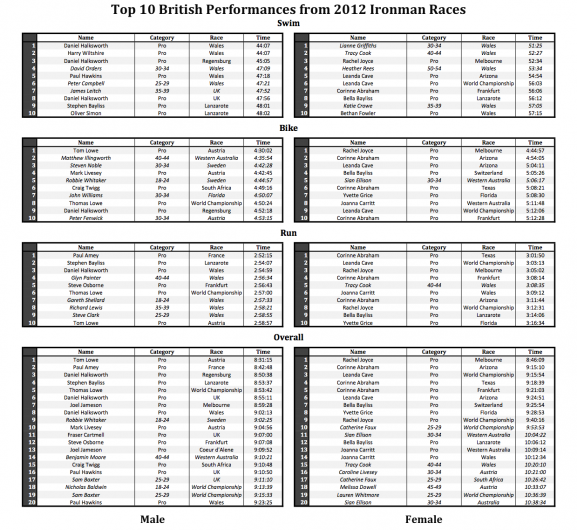 The British pro field is relatively small so many more age groupers (highlighted in italics) make it into the top 10 performances.

Finally, for the sake of completeness, I thought I should look at the fastest transitions of 2012 as well: 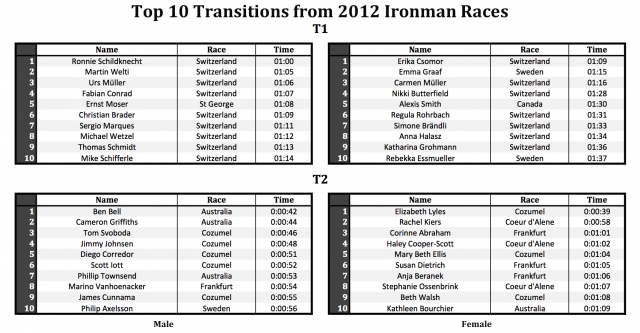 This was the hardest data to clean and a number of fast transitions have been rejected where the athlete in question was an extreme outlier. I didn’t believe transitions of only 1 or 2 seconds, nor did I believe transitions that were so much faster than anyone else at the race. Switzerland with its traditional racking instead of the Ironman race bags dominates.

There are huge shortcomings to unadjusted comparisons across races, Thorsten’s Triathlon Ratings does a far better job of ranking the pros. These are the fastest times without consideration for course or conditions; I have been selective in their construction – removing New York from the swim, and manually determining the authenticity of some results. In the process I did ponder the prospect of simulating the Ironman Age Group Rankings system for every athlete, but that would require some serious work to match athletes across races. There is still more to come from this data.

Also produced from my Ironman results database is this interactive map of the world showing athlete counts by country and fastest, average and slowest performances by country too.