The most obvious criticism of all the recent ranking and league tables is that, when comparing across races, finish time does not reflect actual performance. I’ve willingly acknowledged this limitation in each of the posts, recognising that there are some significant differences between races and that standardising results to correct for this is a difficult task. The tables have been an interesting side-product of my freshly built Ironman database rather than a rigorous analysis or comparison of the data. While I have started to explore methods to normalise the results – so far not to a standard I’m satisfied with – I’ve also exchange emails with someone who has already implemented an approach. 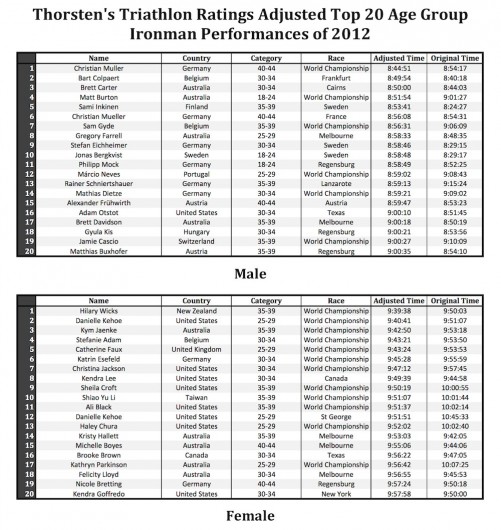 For each race Thorsten uses pro performances to calculate a percentage adjustment for finishing splits that can be applied to normalise the results. The aim is to allow a better comparison of performance by compensating for the differences in races and conditions. Just as we can debate the merit of using fastest times to rank performances in 2012, we can debate the adjustments that have been made (I’ve presented both adjusted and original times for clarity); a mathematical model will always be an imperfect representation of reality. Thorsten’s approach is tried and tested and an excellent starting point when my own experiments have yet to yield results.

Assuming we are happy with Thorsten’s adjustments, and for the most part they appear to hit the mark, we also need to consider whether figures derived from professional results can be meaningfully applied to age groupers. For the majority I would say no, but for the front-of-pack athletes we are dealing with in these tables the performances approach – and occasionally surpass – pro times. It seems reasonable that if we are willing to apply a 5.8% adjustment to Jan Raphael’s 8:04:01 win at Ironman Sweden, we should also be happy to apply that adjustment to the 8:24:27 of the fastest age grouper, Sami Inkinen.

As well as adjusting the overall finish time, Thorsten also produces adjustments for each of the splits. This time I haven’t had to exclude any races from these results – applying the swim adjustments tidily removes Ironman New York’s Hudson enabled dominance of the swim ranks. To complete the rankings, the adjusted top 20 Ironman age group splits of 2012: 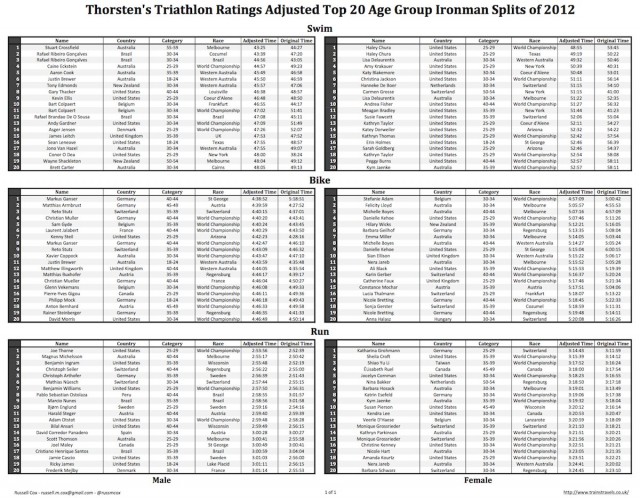 There are some significant changes to the rankings: Sweden’s almost perfect sweep of the men’s overall and bike times is gone, the World Championship has increasing presence, Wales has vanished from the run and even Lanzarote makes a showing. Is this closer to a correct ranking of performance? It certainly feels like a better approach than finish time alone, but there are many ways to categorise and rank results so these lists will inevitably be open to debate.

Ranking age group performances was never the goal of building my database, although it has become enough of a distraction to warrant more time researching better ways to adjust age group times. There are a few months before I will start gathering results for the next season, enough time to make some headway. And, in the mean time I have a collection of Challenge results to work through.