I’ll admit the weather was one reason why I never made it to Wimbleball. Racing in the cold and wet is one thing, standing around for hours on end another. I stayed in, warm and dry, following the race on the athlete tracker. As results trickled in it became fairly clear that conditions were having an impact on the day – times seemed a little on the slow side. Once the race was over I was certain – only 21 athletes broke the 5 hour mark, most of them pros.

Comparing the distribution of splits this year with past performances at Wimbleball the difference in times is quite clear. Overall finishing times are strongly shifted towards the right with most of the damage coming from the bike. Swim and run appear to have been less impacted – differences here, if present, are less significant overall. For most Wimbleball appears to have been a little more challenging than usual. 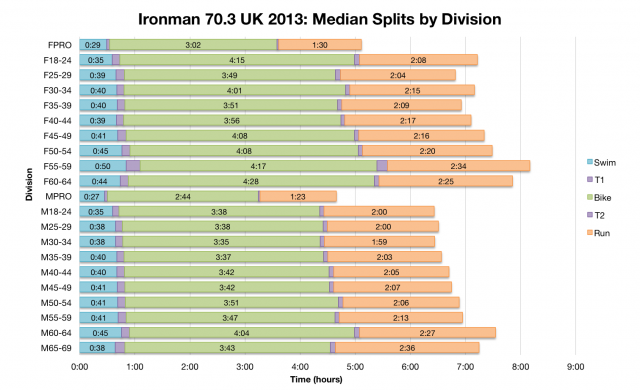 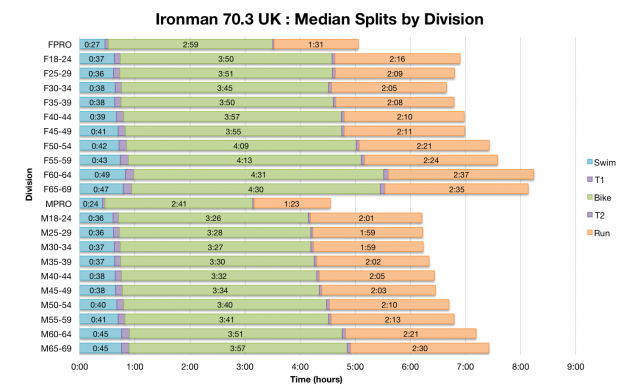 Average splits across divisions support this analysis. With some exceptions, mostly among the women’s field, bike times are consistently slower than the average. Swim and run times however show no strong pattern and seem largely comparable. 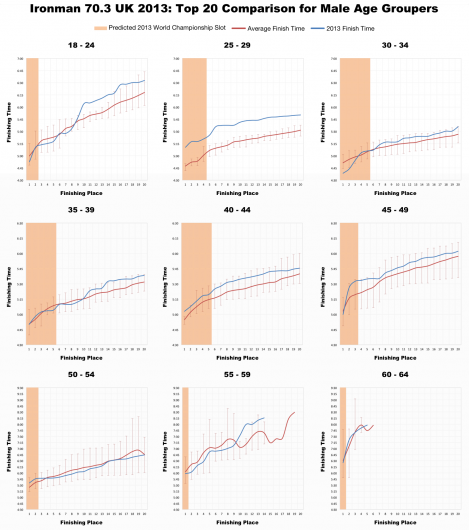 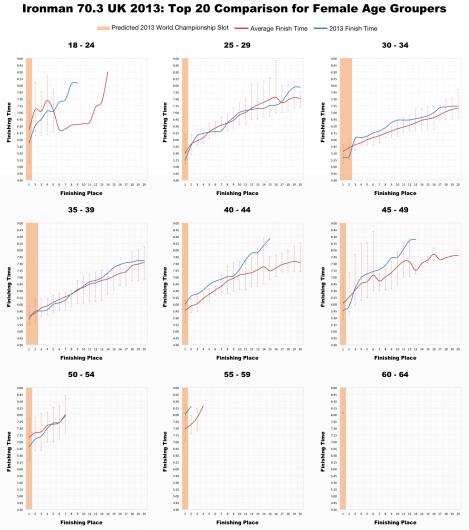 The performances of the top 20 within each age group gives the usual mixed message. In the larger men’s field times at the very front are often on a par (and in some cases better) than average, but many in the top 20 are slower. In the women’s field the results lie quite close to previous averages; many times are slower, but the margin is small.

I decided to expand this comparison to look at the whole of the age group field rather than the fastest few. It’s a new chart and as yet untested. For time reasons I’ve limited it to four age divisions covering men between 25 and 44. 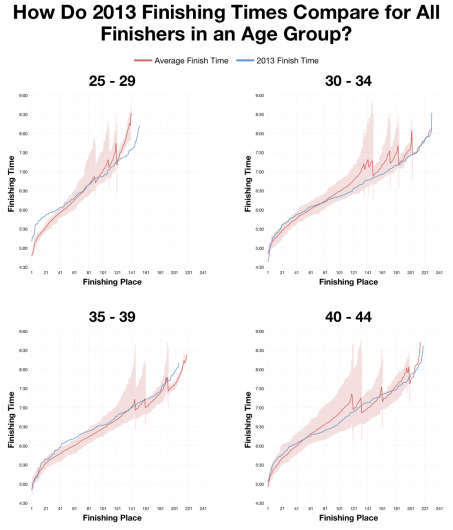 I suspected that as you move towards the slower end of an age group conditions become less relevant to performance. For the slower athletes fitness is the main issue and the influence of conditions will be proportionally smaller. The very front-of-pack may be largely unaffected too. It’s really the middle where the most impact is seen. In the four graphs above performances at the tail end of each age group are broadly better relative to the average than many at the front, but the pattern in the middle of the field is far from clear cut. I’ll need to spend more time experimenting with these charts before I draw any conclusions.

I think I can confidently say a slower than average year at Wimbleball. Finishing times proved a poor reflection of the progress made by my athletes who were racing there. Their placings however were improved and much as it’s easy to fixate on time goals, position in the field is the better indicator of performance. Overall, in sub-optimal conditions, a success.