There are three Ironman races taking place around the world this weekend: France, Austria and Coeur d’Alene. That’s a lot to analyse. I’m going to start off in Klagenfurt with a look at past results from Ironman Austria. It’s a race with a reputation for speed; a fast course under typical conditions that has been know to be exceptionally hot too. There are 50 Kona slots available in total, but qualification is generally very competitive. You can view this all this information in a lot more detail in the age group specific downloads at the end of this article. 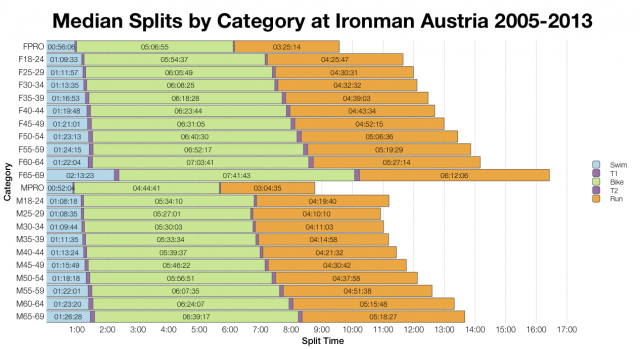 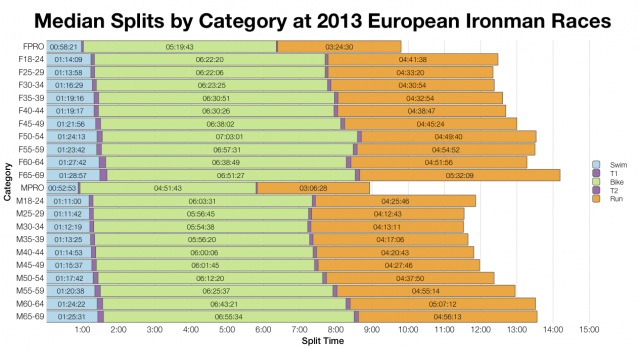 A quick comparison of the median splits form 9 years of racing in Austria with those from the 2013 European race season shows that Austria is faster than average and that that speed predominantly comes from the bike. Swim and run times are often quicker too, but not significantly. However, it’s worth noting that professional performances across Europe are broadly similar.

Looking more closely at the distribution of splits for these two groups really confirms that it’s the bike that makes the biggest difference. In swim and run there is little real change, a matter of minutes perhaps. On the bike though the jump is in the order of 10 minutes at the front of the pack and 20 minutes back at the middle of the pack. The result is a similar magnitude of change in the final finisher splits.

How does Austria have such a fast bike? The course and the road surfaces certainly help, but two other factors have to be mentioned. Firstly I’ve seen enough GPS files from different athletes and different years of racing to know the route comes up a little short (well within the 10% Ironman tolerance), obviously that helps. It also has to be mentioned that the bike course can be crowded and drafting – as at many other races – is a common complaint. Both likely contribute to the fast bike split trend.

The table above contains my estimates for Kona slot allocation based on the start list available on Ironman.com. Race day figures will vary according to starter numbers. It’s worth mentioning that last year saw some significant roll down in addition to the allocation in a couple of age groups; for example the final slot went to 15th place in the M40-44 age group. Always go to the roll down. 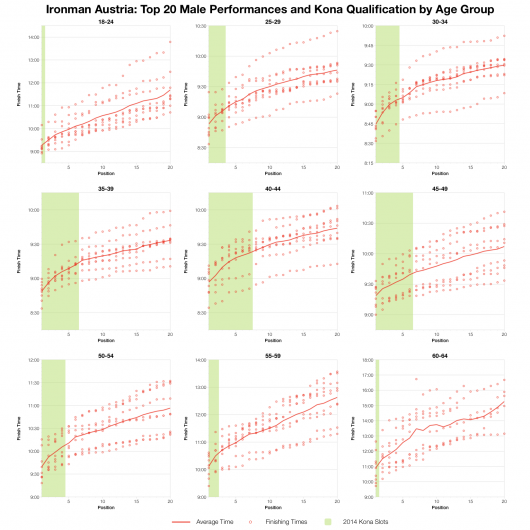 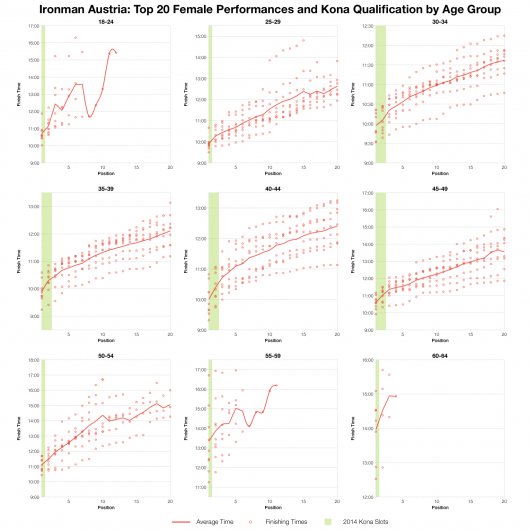 Finally a look at the top 20 performances for age groupers from the last 9 years. Times have varied with conditions year-on-year, but generally follow a similar trend. A 30-34 year old man probably needs to go around 9 hours with each subsequent age group being a touch slower. While that might reflect average performances it should also be noted that on occasion a sub-9 has been a qualifying requirement for anyone under 45. The women’s field is quite small and so has fewer slots available, winning your age group should be the goal; that’s likely to mean a 10 hour race for women in the 25-45 age range.

For a lot more detail on all these statistics you can download one of the documents below.

I’ll be back next week with analysis of this years race and in the meantime will have statistic for Ironman Coeur d’Alene going up tomorrow. 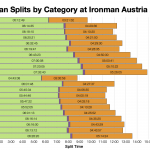 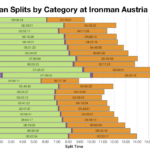 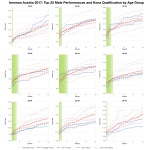 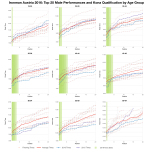