Ironman North Carolina debuted over the weekend with an abridge course, the consequence of Hurricane Matthew’s damage in the state. While the full swim and run remained the bike course was shortened to 50 miles. As a first time race and with this major change to the course I can’t really analyse the results in detail or put them in the context of other Ironman races.

Every split at this race is faster than usual. The swim appears to have been particularly quick and at 50 miles you can’t compare bike times to other Ironman races. The run is probably the closest to a standard distribution, but even then, the shortened course would have meant athletes were less fatigued and better fuelled to start.

Remembering that both DNS and DNF numbers are counted in the swim data it looks like the DNS rate at this race was particularly high. For those who did participate though, the DNF rates on the reduced course were, not surprisingly, low. 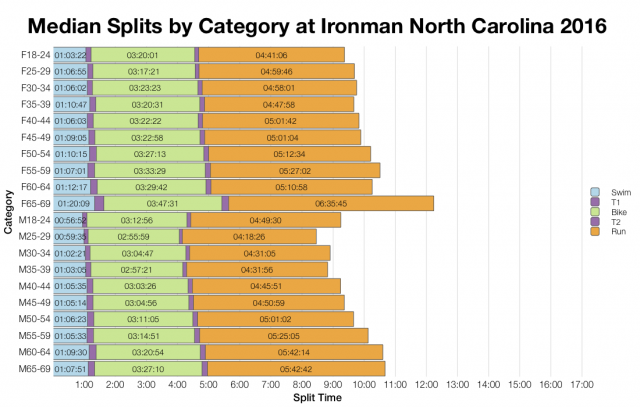 The medians above show the fast splits yet again. There’s no comparison to be usefully made here so they’re presented for interest.

All qualifiers at this event look to have come from the US (assuming no roll downs). The race itself only had 30 slots on offer so there were relatively few to go round anyway.

The race itself was also largely made up of US athletes too, with a handful of other countries completing the remaining numbers.

The above table contains my expected Kona slot distribution based on athlete tracker numbers, actual start numbers determine the final distribution. I’ve then given automatic qualifying times assuming no roll down takes place. Obviously these are much faster than usual qualifying times, which you can review on my Kona qualification page. 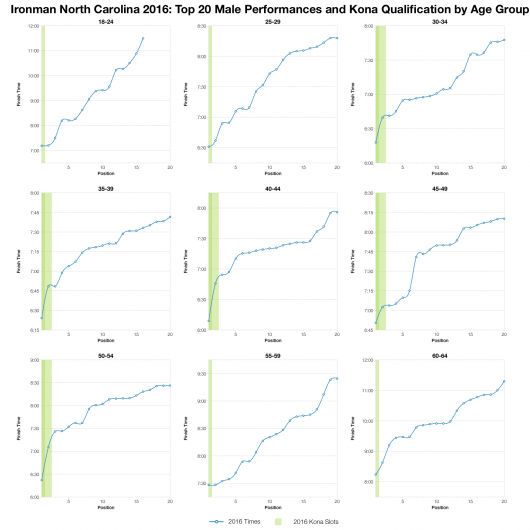 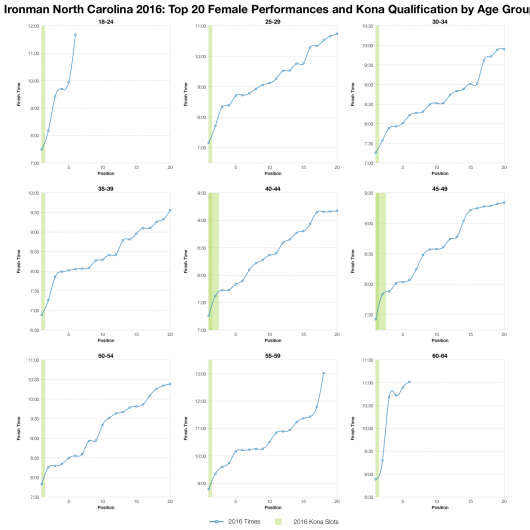 The final two graphs show the times of the top twenty of each age group. We don’t have any other times to offer in comparison and as we know the shortened course results in seemingly fast times. If I make any observation it’s that many of these curves are quite steep with a big shift in time between first and twentieth and often a sharp jump to first place. In normal circumstances that would suggest the front of pack was relatively thin.

You can access a spreadsheet of the full results and splits from Ironman North Carolina 2016 on my Google Drive.