To wrap up my examination of the demographics of Ironman racing I’m reviewing how athlete statistics vary across regions. Considering the gender, age and numbers racing in different territories and how they compare. You’ll find the broader picture covered in Part 1, here I’m digging a little deeper into those numbers.

Races are grouped by Kona qualification year. A 2010 race is any race that carried qualification slots for the 2010 Ironman World Champs. This approach aligns statistics with my Kona demographics and avoids issues with certain race’s date changes. My regions match Ironman’s with the exception that I keep Australia (and New Zealand) separate from Asia.

As with all demographics posts, you’ll find stats for performance and qualification elsewhere. This article is about the people who race.

The number of Ironman competitors has grown over the last decade so the first thing to consider is how that has happened in each region. Remember this is not about where the competitors came from, but where they raced.

I should note a hole in the data: there are 3 years, 2008-2010, missing for Ironman Brazil. This doesn’t impact the main trends seen here, but does under-represent South America in the initial years. 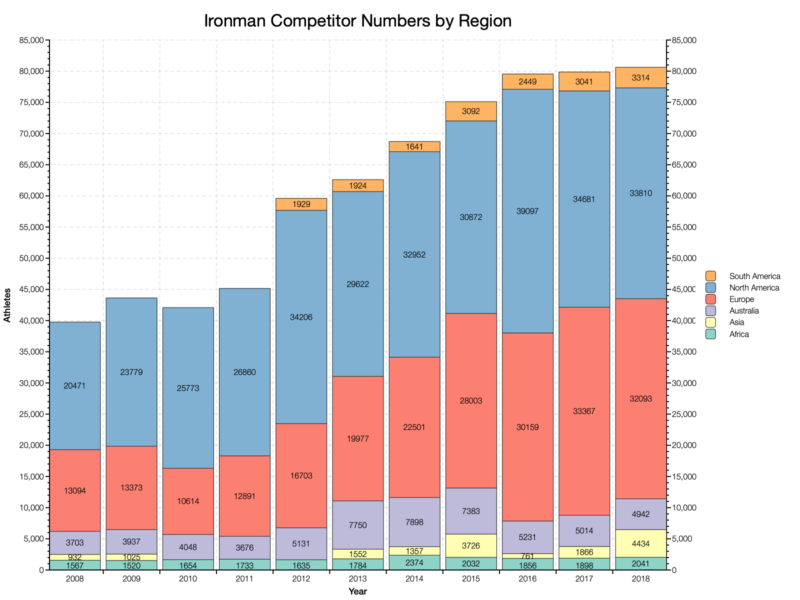 The big shift in growth in 2012 mostly came from Europe and North America as race numbers and size expanded in these territories. From 2012 onwards competitor numbers in the US have varied, but with the exception of 2016 not really seen much growth. Europe has been a bigger driver of numbers in that time frame.

Other regions have contributed smaller numbers but also seen growth. Africa and South America have limited race options and that in turn has limited the size of their growth. The races on offer in Asia have varied in number and with that the number of competitors in that region. Australia hit peak numbers when Ironman Melbourne was run alongside its other races.

Peak numbers for a given region tend to correspond with peak numbers of races in the above table. The height of North American competitor numbers occurred in 2016 when there were 18 North American races on offer. Asia large fluctuation in numbers is reflected in the large fluctuation in races. Europe’s steadier growth corresponds with steadier growth in race numbers. 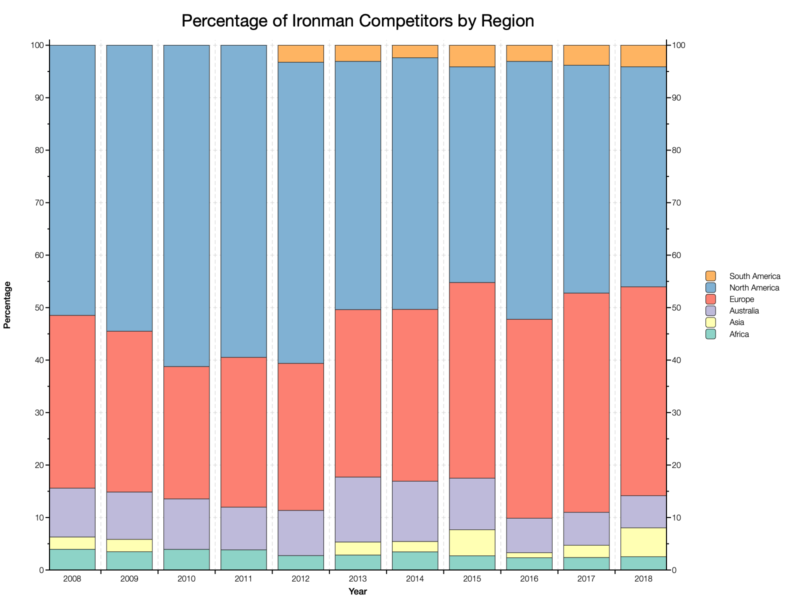 As a brief aside to the demographics, the number of Kona slots available by qualification has varied by region and race numbers too. I only have accurate slot allocation data since 2012 to consider so we can’t compare prior to that. Slot numbers in a region vary mostly with race numbers, but over the last 6 years slots have been spread thinner as overall race numbers grow. 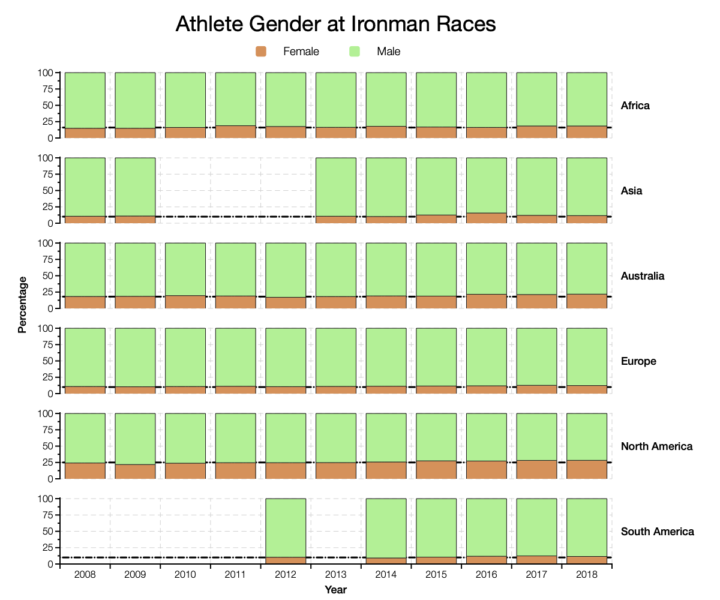 If I consider the pattern for gender participation over the last 10 years then I can produce a large graph that tells me two things. Gender participation varies by region and hasn’t changed over the last decade. Fewer women race Ironman than men, this is at its lowest in Europe and South America where only 10% of competitors are women. It’s at its highest in North America where around 25% of competitors are women.

The other demographic to consider across regions is age. Trying to look at a large number of age groups over 10 years would make for confusing charts so I’ve limited comparison to 2008, 2013 and 2018. This gives a snap short of before growth, early growth and where Ironman is now. There’s still a lot of data so I’ve looked at this in two ways. 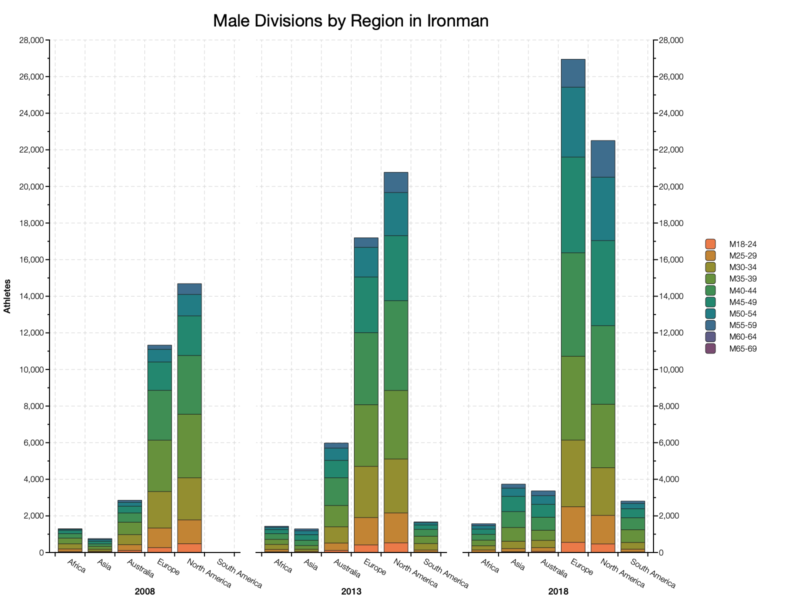 The range between the smallest and largest regions makes it hard to compare age groups when we consider absolute numbers. I’ve included this chart more for completion. It does show the pattern of growth in different regions for the male field. 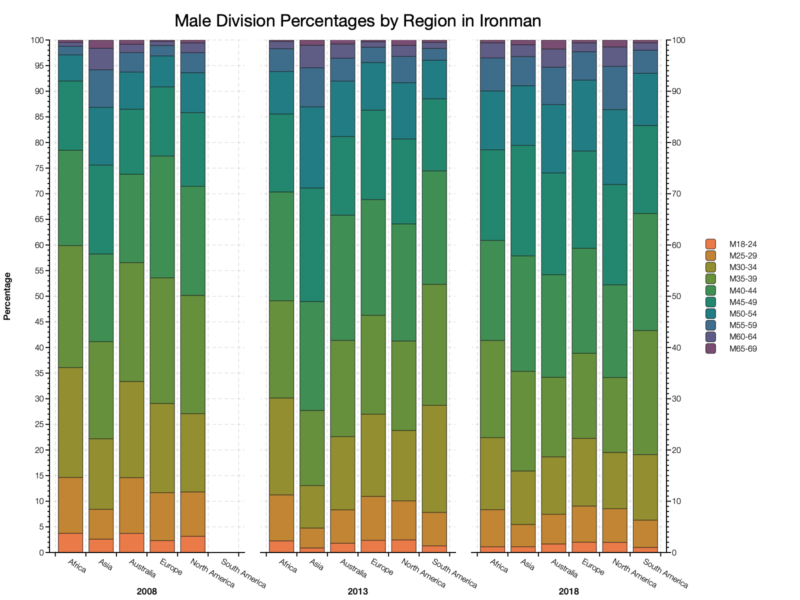 Percentages are clearer and allow us to make some comparisons. Age distributions vary by region although not hugely and they are more aligned in 2018 than they were in 2008. South America has the most youthful competitors and that’s been true for many years. Every region, with the exception of Asia, has seen competitor distributions age over the decade. There are more over-45s now than in 2008. Asia saw a particularly old demographic back in 2013 though. 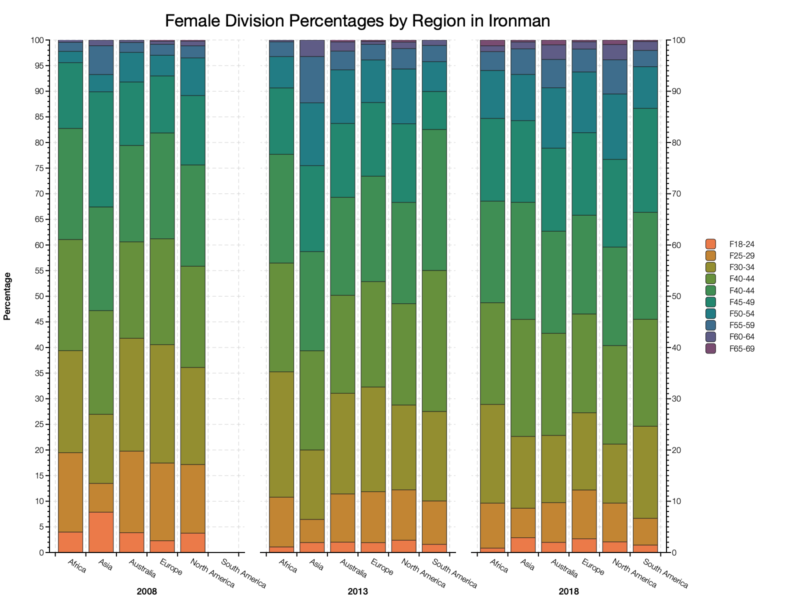 If we consider the women’s age groups then the pattern is much the same. Varying distributions that are more consistent with each other in 2018 than they were in 2008. South America having the youngest distribution, but all regions seeing an ageing distribution with more over-45s now. 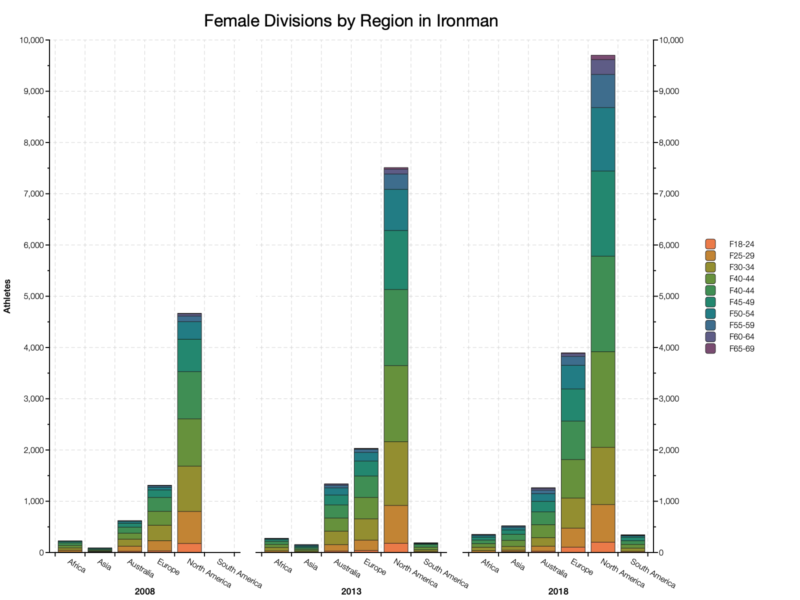 For completion – the absolute numbers for the women’s field.

Grouping by region allows for better comparison of how those regions have changed over the decade. 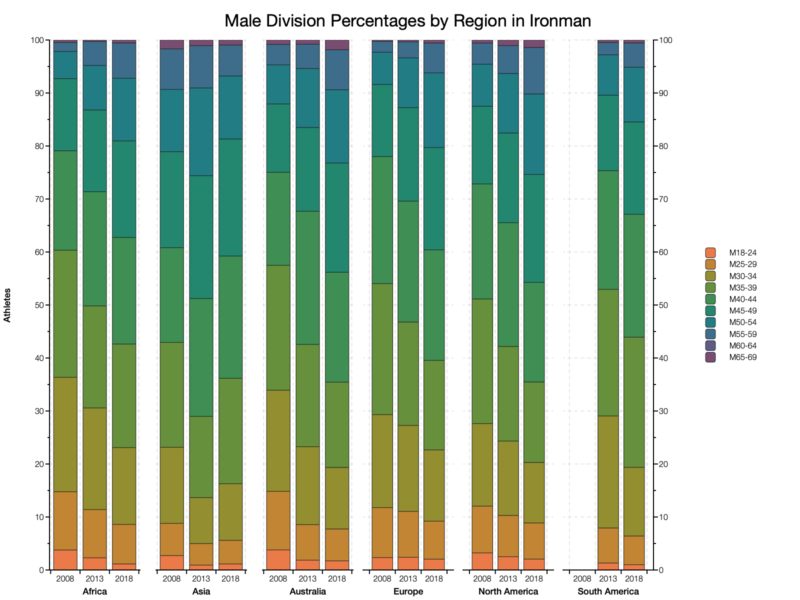 Percentages remain the better approach and the pattern of an ageing competitor population becomes much clearer in this chart. Asia is the only territory to buck this trend with the 2013 season seeing the oldest athlete population. Otherwise what we see is a field increasingly weighted towards those over 40/45. 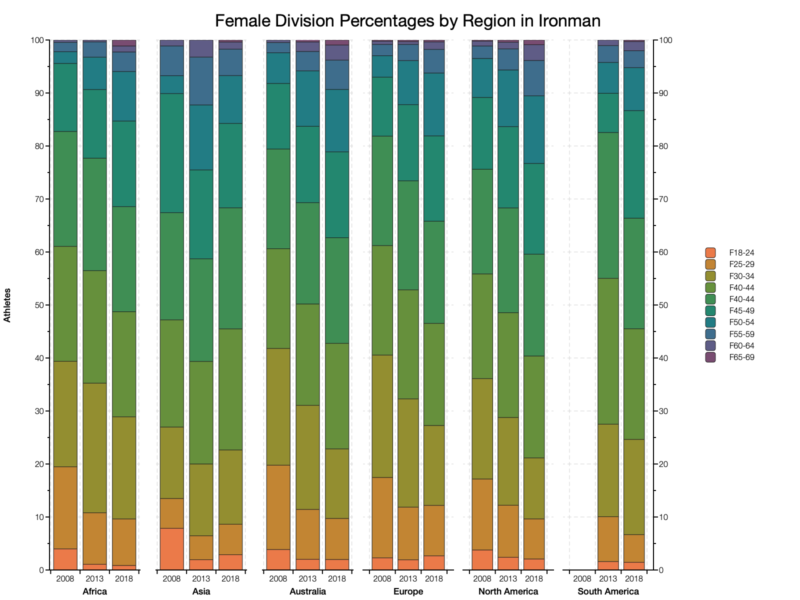 What’s true for the male age groups is also true for the women. The same pattern is shown across all regions. 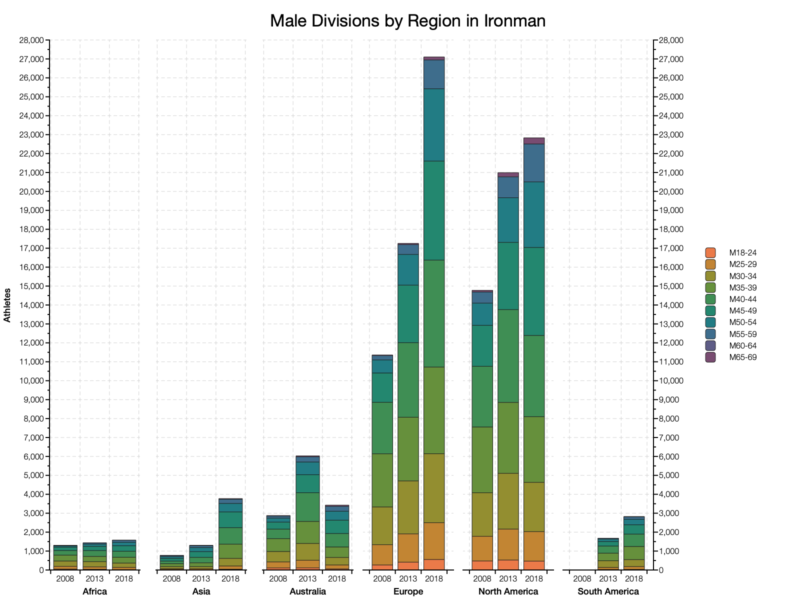 For the completists, the chart of absolute numbers for the men. 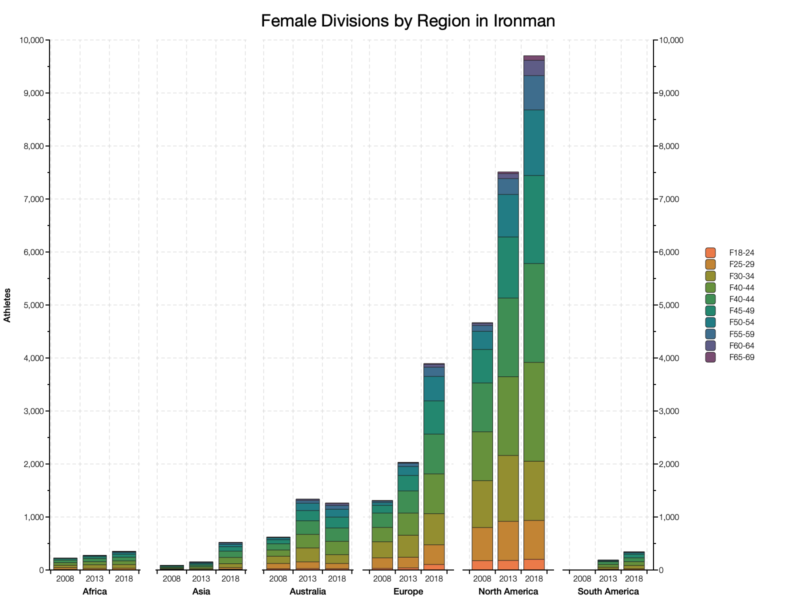 What we can probably take from this is that Ironman has grown over the last decade. Mostly by expanding outside of North America and spreading further round the globe. Europeans and North Americans remain the largest markets, but haven’t seen much growth in recent years. Ironman uptake among women varies around the world, but as a proportion haven’t changed over the last decade. Ironman athletes are ageing: a lot of the growth appears to have been in the number of competitors over the age of 45.

That concludes my look at the demographics of Ironman racing for now. I’ll revisit the statistics in future years to see how things change (and correct the missing data from Brazil!)