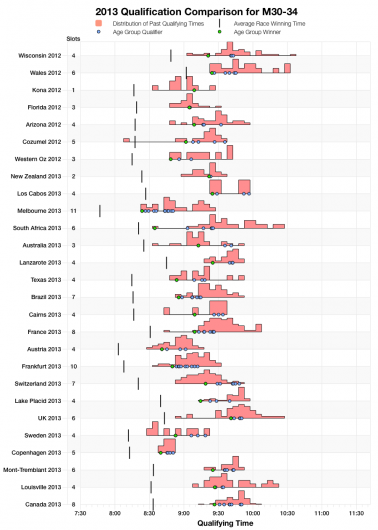 A new graph I’ve been working on that combines a few useful pieces of information around Kona qualification.

Figures are based on the 2013 qualification season with additional historical results for further information. Working roughly left to right for each race there is an estimate of the number of available slots for the age group based on the number of slots at the race and the age group size (exact numbers aren’t often freely available unfortunately). A vertical bar representing the average race winning (pro) time from all previous results. A small green dot indicates the age group winning time in the listed race year while a series of small blue dots indicate the other qualifying time (based on expected number of slots and placing in race, doesn’t account for roll down). Finally the small red histogram for each race shows a distribution of the finishing times that would have qualified (based on placing and predicted slots) from all available year’s of results.

It can’t tell you which race is the best choice for qualification, but it might give some sense of how they compare. So we can see that Austria is a slightly faster race on average than Frankfurt, but Frankfurt offers far more slots. That said qualifiers in Germany are much more tightly packed together than in Austria so if you felt you were capable of being around the 9 hour mark you also know you won’t be alone. Of course it all comes down to how you race on the day, what conditions are like and who else turns up.