☰
Home > Now you must execute the “Pinky Move”

Now you must execute the “Pinky Move”

The difficult part of this is writing something when not much has happened and there’s not much going to happen. Effectively I’m reliant on the mundane events of my life actually being of interest to others… As such this post promises to be an exciting one. 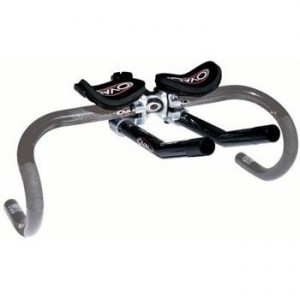 I’ve got straight into adjusting my road bike setup, my first purchase for the changes arrived the other day and is already installed – Oval R910 clip-on aerobars. I’ve titled this post in honour of the strange English of the Oval instruction manual. The Pinky Move is a vital step if attaching the arm rests to the extensions. Well it would be were it actually possible to do this, but my components didn’t bear much relation to the description in that bit of the manual.

I’ve lowered my handlebars a half inch and added the aerobars on and so far I’m mostly happy, some tweaking to do, but I think they’ll work well. I’ve a new zero set back seatpost on the way to move my saddle a little further forward which should allow me to sit more comfortably whilst on the aerobars. Hopefully I’ll get to try the setup out in full this weekend and decide if it’s all going to work for me.

Enough about kit and bike setup, fascinating as it is. Training has been pretty reasonable this week and by reasonable I mean there’s been lots of it. I’ve compensated for the recent lack of swimming with trips to the pool each day and trying out a new drill – bands. Basically tying your legs together so you can’t kick and then floundering in the water as all the flaws in your body position are revealed. I’m pleased to say I did a bit better on my second day with them.

Running is going fine, the endurance seems to be there, I need to do some faster work on fresher legs though. Cycling has happened this week, but nothing too hard, legs have been tired and my left ITB is pretty tight as usual. My mission for the next week is to stretch and massage it out so interval work on the bike doesn’t hurt so much. I’ll be getting in the bike volume at the weekend.

I managed to time starting my blog with a run of weekends away… Well there’s a break in the run now so this weekend I’ll be stuck at home. Out on the bike, sure, but none of that Spanish sunshine or French rain to accompany me. Not much more to be said about it.

Occassionally I think about what to blog and I have vague ideas of writing some kind of insight to my plans, thoughts on relevant subjects, motivations… Basically something profound and clever… When I get here, I end up writing about lowering my handlebars and swimming with a rubber tube tied round my legs…