Excuse the random nature of this post, I’ve nothing specific to write about so this should be labelled under tedium. 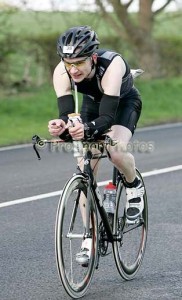 Third race of the season arrives this weekend, the Cambridge Duathlon. The photo above is from my first time at the race… No I didn’t buy it. It’ll be my third time doing it, though they adjust the course each year to ensure results aren’t comparable it seems. I don’t really know how I’m feeling about it, there’s a bit of pre-race nerves there, but it’s only a C race in the end. I find it hard to get my mind into the first races of the year, really I need to get a good result to give me a psychological boost and feel more positive about all the training so far. You never really know how well what you’ve done is paying off until you race.

A bit of sports psychology is probably going to be next on the reading list as I feel it’s an area that lets me down. I race a fair amount I’d say, comfortably over 10 events of varying size in a year. 2 Ironmans, 4 halfs and a few other races last year for example. It worked well though with a big period of racing leading up to my first Ironman in Austria when the race came I was feeling good off the back of some of my results and comfortable with everything that surrounds a race. Western Australia was a little less ideal, whilst I was still racing quite strongly, my trip became a little too much of a holiday and my preparation wasn’t quite there.

To go back to the initial point though – I do need to work on my ability to focus and maintain effort during long races. Confidence is an issue too, I doubt my ability and plan in the run up to an event and it can take quite a bit of work to overcome this. I’m wary of the field, not enough hard science and fact for my tastes at times, so I’ll cautiously try some of the literature. In the end though if something works I’ll give it a try even if I have to struggle with spiritual/hippy garbage!

In other reading I have quite enjoyed Into the Wild this week, to damn with faint praise it wasn’t bad. It recounts the life of Chris McCandless a young man who abandoned his family, wandered America and pursued a dream of living in the Alaskan wildeness that ultimately killed him. The topic itself is interesting, the writing style is engaging, but at the same time just felt a little bland. There were elements of the theme of heading off into nature, or going off on an adventure I could certainly appreciate. I don’t see myself wandering into the wilderness though and couldn’t conceive of doing so on the back of such little planning.

When I’m in Oz I certainly plan on spending some time in the bush, camping and hiking. But I plan to have all the appropriate equipment and information to support that kind of trip. Reading books relating to mountaineering, adventure racing and survival I definitely empathise with the fast and light approach. Makes sense to me the focus is about preparation, skill and control all things I rate pretty highly. So to me the appeal of hiking, climbing and the outdoors is about going to these places with the right mental and physical preparation and the exact equipment needed. Or maybe I’m just an elitist who doesn’t get why you might do something just for pleasure and not to suffer! Admitedly it’s easy to be elitist when your experience is limited in this area, I may change my mind when faced with it! The Alps, Oz and New Zealand will hopefully provide me plenty of opportunity to test this approach.

I promised rambling and I’m delivering… Training goes pretty well this week, fair bit of all 3 sports though nothing too heavy. Been using the rollers with my bike and seeing some improvements in handling and cadence. More technique work with swimming, dredging the pool doing band work. A good 2.5 hour long run in there too to trash the legs and confirm my trainers need replacing (well it’s been about 1000km). Will be attempting a bit more intensity on the bike this evening, a masters session for intensity on the swim and a race at the weekend to round it off.

New trainers are on the way, 2 pairs to try the alternating approach that supposedly makes them last longer. I suspect running lots on a worn out pair of trainers was a contributory factor to my run injury that plagued the second half of last year. I don’t want to make that mistake again. Plain Saucony ProGrid Omni 6s rather than exciting trainers like the Grid Fastwitch 3. I’ll save the shoe fetish issues for another post…