With registration done, bike prepared and bags packed I’m sat in the McDonalds that’s become an unofficial office in Puerto del Carmen. Clientele can be divided into two groups – holiday makers genuinely here to eat and athletes here for wi-fi. Cheap coffee is the menu item of choice for those just needing internet access during race build up. Perhaps a McFlurry after the race though.

All that’s left between now and race day is checking my bike in. Aiming for three on the dot to get it done and out the way. There’s the risk of ending up in a queue, but I like to get the job done and just be able to chill out for the remaining hours of the day. Whatever helps you stay calm and relaxed.

As mentioned I really don’t know what to expect from this race. My preparation has been unusual way more of a break than planned and a relatively short span of hard training. I feel like I’ve put a band aid over the cracks and am hoping it’ll hold out. That said I have a simple race strategy in mind – go hard till the line.

It’s hard to predict times and last year’s race gives me little to go by. I swam just under a 1:04 here last year which wasn’t very good. The target is to swim an hour on what seems to be a slower swim course than some of the others. My first step to my goal is getting myself well placed in the swim start. That’s going to mean getting in the starting line earlier and being up front. I’ll be going out to the right hand side so there’s a little more choice in avoiding the throng at the start.

Once out into the water it’s going to be a matter of settling into a solid, working pace. Not getting carried away early on and tiring myself, but pushing just enough. There should be plenty of feet to swim on so once I’m in a good draft it’s a matter of keeping going and making sure I don’t let things flag. I’m definitely swimming better than I was this time last year so at the very least beating 1:04 shouldn’t be a problem.

They’ll be no powermeter to help guide me on the bike course this time round. I’m going with my Zipp 404s instead as I don’t fancy using a heavy training wheel or covering it up as a disc. So my primary guide is perceived effort along with my heart rate. I’ve spent some time plotting heart rate and power from all my training out here so I’ve a fair idea of the sort of effort I’m considering.

As with New Zealand I’ll aim to hold at around 140-145BPM for the entire bike. The reality is I’ll come out the swim and through transition to start with my heart going in the 150s. It always happens and my currently feeling it you’re best just to go with it for the first half hour or so. It will settle you just have to watch you don’t cook things at this point.

There’s a few bits of minor climbing early on in the race and one of my few memories of last year is athletes pounding there way up them. I’ll be conservative and hold a steady effort looking to pick things up a lot later in the ride. My best races have started out feeling far too slow, but ended hard.

One key focus will be nutrition on this ride. Typically I find I dip a little in the mid-portion of the bike and come back towards the end. I distinctly noted this in Taupo where a bit of Powerbar seemed to pick me up and once I kept on top of feeding I was able to push the whole of the second half. I’ve a tendency to hold out on eating in the earlier half, drop in energy, ease up and eat more and then finally pick up. I’ll be starting on my gels and bars sooner and conscientiously eating on a regular basis. Hopefully this will keep a more consistent strong effort throughout the day.

Winds are forecast to be lighter than usual which is a little disappointing to be honest. I’ve been here a month and experienced a range of conditions. High winds won’t make for a fast day, but they’ll test and split the field more and I think would work to my favour. Whatever comes though it’s about riding a consistently high and sustainable pace that can carry me through to a decent run. As for a time, on this course I really couldn’t say, but I’d expect to be last year’s saddle sore induced 6:20!

If I think I’m underprepared in any area of this race it’s the run. My run training is at a particular low in the cycle at the moment and whilst it is picking up the race has come too soon to take advantage of that. I don’t think it’ll be a real weakness, but it won’t be the strength it could be.

Light winds mean hot conditions which could work in my favour. I know the focus will be on keeping myself cool. Taking any ice at aid stations or at the least dousing myself with water as much as possible. Temperature and nutrition will be the key to maintaining a good run pace. On the food side I’ll be following the usual gel routine alternating with aid stations between gels and water or just a little energy drink.

Overall pacing will be to hold steady for the first 30K or so and then pick things up for the final lap. How I feel my dictate my ability to do this of course, but what I do want to avoid is going out as hard as I did in New Zealand. This time if the pace seems too hot I won’t just give it a go I’ll be a little more controlled. I had a big dip during the mid-section of Taupo and I’d like to avoid that here.

Once again last year presents me with what should be an easy target to beat a 4:20 marathon. My slowest and longest run ever! This time round I’ll be aiming to go 3:15 or better with a proper strong finish to my race.

Way back I had goals of getting on the podium here and whilst I’ll keep that in mind I really don’t know now. I’ll go into the race with the mentality that I can do it, but will take what my current fitness gives me on the day. I think breaking into the top 10 in my age group is certainly within my reach, how far is the question. 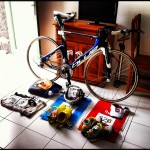