Another year older today. Nothing profound to say with increased age. Only I note that as I get older it’s increasingly common that people I know are buying houses, progressing careers or having children. I’m quitting my job, heading off to the beach and messing about swimming, biking and running for the next year. 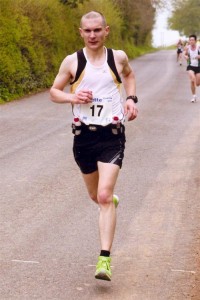 That’s me 3 years ago in what was roughly my first serious race, well first I can find a picture from. The 2005 Taunton marathon, it was my second and I completed my goal of a sub 3:00 marathon with a 2:50:04. Good enough for third place, a little plaque, £40 W H Smiths vouchers and the chance to meet Miss Taunton.

This post is inspired by something one of my fellow Epic Campers has just put up on their website. Steven won the EC pink jersey in Italy and keeps an interesting (because sometimes it’s hard to believe just how much he trains) blog of his training. Anyway, he’s just put up an athletic timeline which I thought was a cool idea. Cool enough that I should do my own for my website, however I’m not going to put in the effort he has right now, so a rough post on my history is all you’ll get.

There is possibly one advantage to having been lazy when young – you can quite quickly sum up your early years. 1976-2000, the first 24 years of my life amounted to next to no athletic achievements. I did learn to swim not really swim, but enough to ensure I was at less risk of drowning. I did run whilst at Secondary school, but largely because with only one teacher to monitor you over the local roads there was plenty of opportunity to walk. I did once run the whole 2.5 times round the school when one of the better teachers decided to spend time with us slackers and get us moving. I have run round my old school many times since and the idea I struggled to get round seems absurd now! Other than this I was not particularly good at Tae Kwon Do for a couple of years, really a result of not doing anymore than the minimum of training and lacking the flexibility. I did nothing during my university years.

2001-2003 the free gym membership years. I can’t recall the exact catalyst, though the fact the membership was a free perk with my job helped. I followed a training routine given to me at the gym and I didn’t eat that much. I easily get obsessed with things so I was pretty dedicated attendee. Net result was I got skinny and I got reasonably fit. At some point in that time I started running and that got me training outside a little. I was pretty happy with that having been neither thin nor fit for most of my life.

So then it was suggested to me that I should have a go at a half-marathon. 2004-2005 are the start of the athletic years. I could have uploaded a picture from that first half-marathon, but it’s too embarrassing. Being obsessive by nature I moved from doing a half-marathon to the goal of completing a marathon and during training transformed in to breaking 3 hours. So Taunton in 2005 I managed that in my second marathon and then I started training for tris. Towards the end of the year it seemed like a smart idea to do a half-ironman in addition to the Olympic distance that was planned. I did ok in the UK Ironman 70.3 (as it had then become branded), well enough to get a slot for the World Champs in Clearwater.

2006-now and it’s just more training and more racing. Roughly I’ve gone from casual gym membership to full time training in a period of 4 years. It certainly wasn’t the plan when I started and I never imagined I’d get to where I am now. Obsession definitely helps, what I’ve managed so far has simply come down to training day after day. Looking forward I have plans now, but it’s still hard to see where I can get in the next year or two.

There we are, I’m now 32 and about to become a full time athlete off the back of 4 years of relatively focussed training. I’ve also managed a reasonably long post despite nothing much happening this week other than a fairly decent amount of training.