I fear I may be about to break one of my rules about blogging (again). If you don’t have anything interesting to blog about you shouldn’t blog at all… As the journey to Australia gets ever closer I have a lot of things on, but not much to blog. 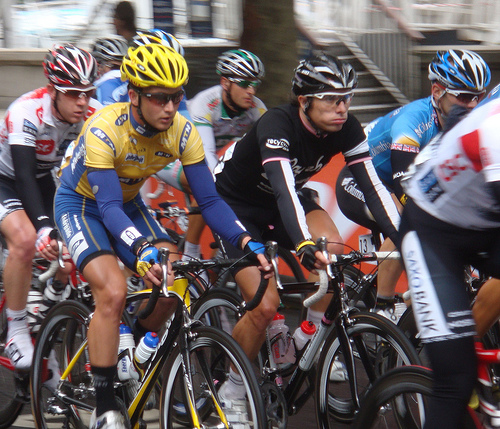 As the photo shows I spent some of Sunday watching the opening stage of the Tour of Britain. Much as I love cycling I have to admit at times I felt a bit like the Rapha rider looks… A crit race meant you got to see the peloton several times over the course of the race, but even then it’s not the most exciting sport to watch. It was however a pleasant change to be watching others racing rather than being part of a race myself.

In fact my whole weekend was a bit of a break from my usual routine. I visited a friend from Uni and spent the weekend wandering about London and playing video games. I spent a lot of my twenties doing this, but my consoles have sat in a box the past few years. Whilst it was fun, I’m not really tempted to unpack them. Overall I’m much better at this triathlon stuff than Guitar Hero. Good to forget about training for a couple of days (early morning Saturday swim excepted) and seems to have let my legs get over the Worlds.

Monday I briefly revisited another of my interests and another friend from Uni. This time I gave away my comic collection, 11 large boxes of comics, I’ve no idea how many. All the result of nearly 15 years of buying and reading comics. Way back I vaguely remember mentioning making a decision to dispose of some of the stuff I’d amassed over the year. The comics took up a lot of space and the reality was I was not likely to be reading them again anytime soon. So they’ve all been passed on to my friend Jon who has volunteered to sort them, keep what interests him and pass the rest on to Oxfam. Can’t complain they’re going to someone who’ll appreciate them or they’ll benefit charity.

Bit late to be doing this, but on the subject of getting rid of things – a shameless plug for my stuff on ebay. Chances are, by the time you read this the auctions will have closed and you’ll get an empty page. Still if there is something there feel free to bid, remember every penny goes towards helping a needy athlete race!

A couple of weeks back I had some crazy plan that I’d train through the Worlds and treat it as a training race. I followed the plan on the build into the race and in theory it was a training race. Just very hard training, that’s all. I trashed my legs enough though that there was no real chance of quality training last week. Things look to be back to normal now though so the plan for this week is to get back into normal training scheduled around the odd trip into London. I’ll carry this through till a week Wednesday when it’ll be time to pack things up for Oz. A couple of days lost to travel, then once I’m there 2 weeks to acclimatise and then race the Gold Coast Half-Ironman!