☰
Home > What If? Russell Blogged About Comics Instead of Triathlon

What If? Russell Blogged About Comics Instead of Triathlon 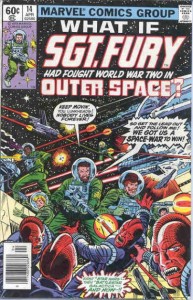 [If you read this blog purely out of interest in my training you may want to skip this one. Having more free time and with wet weather yesterday I finally got around to seeing Watchmen. Many weeks after everyone else here’s my thoughts and a few comments on comics.

And lame as it is – the title to this post is based off the ‘What If?’ series of Marvel Comics. The idea being change an aspect of a Marvel story and play out how things might go. Ranging from if Peter Parker’s Uncle Ben hadn’t died to the more absurd Bull Pen being the Fantastic Four. Personally though I’m a sucker for anything involving World War II heroics like the example to the right!]

A couple of weeks after everyone else I’ve finally got around to seeing the Watchmen movie. I’m surprised to say I actually really enjoyed it. I didn’t find it too slow, nor the sex scene as uncomfortable to watch as others have claimed. It felt remarkably true to the themes of the book even with the alterations to the ending. I would say it was a little bit too violent, I don’t really remember the comic being quite so graphic or extreme. Perhaps I’m just getting old in my opinions?

I encountered the comic in my early teens. A period when my dabbling in comics was largely influenced by what my older brother showed me. To be honest I had little taste or appreciation back then, but could recognise good comics. Watchmen was definitely that and being a young comics geek I also owned the smiley button and a T-shirt. Since that first time I’ve possibly reread it once and that would still be over 15 years ago. Despite the lack of familiarity it left a lasting impression which could have set the movie up for a fall. Watchmen was a significant comic in my comic book geek life.

As a slight aside I just want to vent a little comic geek frustration. It’s not hard to find articles or comments refering to Watchmen as significant, breaking the mould or redefining comics. It’s true, it was an introduction to a wider world of comics at a time when I was new to the medium. It was different to the bulk of other titles out there, but it wasn’t an entirely new concept. Moore himself had explored similar themes in previous works (reading some bits and pieces online reminded me just how good Miracleman had been). Others had touched on the themes too. The significance with Watchmen is that it is read by people who probably don’t read many comics and it show them that ‘comics aren’t just for kids’. Every week in comic book stores there are plenty of titles from the trashy to the intellectual. Watchmen didn’t change that, it was good, actually great, but comics covered the range from trash to treasure long before it was around. Grumble over.

So a classic comic from my youth that left a strong impression vague on details admitedly) made into a movie. That’s aready a big hurdle. Throw in that it’s a long movie and I like my movies to aim for around 90 minutes of entertainment then end. Really I was almost nervous when I went in the cinema potentially I’d paid to spend nearly 3 hours watching memories from my teenage years be trashed. Yet almost immeadiately I was drawn into it and from then on enjoyed every minute.

In my opinion it did a fantastic job of capturing the essence of the comic. I’ve seen complaints about it being slow, but the pacing seemed spot on. Perhaps there could have been cuts, but nothing really felt unneccessary. If anything the slowness worked for the film adding a heaviness as we head towards armageddon. Whilst I haven’t read it for years surely the comic was slowly paced too? Visuals were great though the nuclear kiss dream sequence is far more striking in the comic. That was a moment of disappointment for me, but I admit my Watchmen T-shirt was the image of the skeletons kissing as the bomb obliterates them. I didn’t have much luck trying to find an image of that. Poor google skills and with the movie out most of the images you get back are disappointingly from it.

I won’t spoil the ending. It was changed and I can kind of see why. Perhaps they thought the original events of the comic book finale were a little too ‘silly’. They work better in the context of a comic read by people familiar with the medium and its themes. In a standalone movie it would possibly have seemed almost random. I’ve seen it mentioned elsewhere, but Bubastis, Ozymandias’s Lynx is only really relevant to the story if you have the comic book ending. I guess if you’ve got a special effects budget to use though.

To sum up I liked it. It’s an unusual superhero movie just as it was unusual as a superhero comic. I think that may have worked against it a little. Comments I overheard from some audience members after the movie suggest to me it wasn’t what was expected. I’ll catch it again when it’s on DVD with apparently even more film to watch. It’s probably not going to have the same replay value that Iron Man does, but that’s a different, simpler kind of superhero story. Incidentally, during the trailers – a new ‘The Fast and the Furious’! Oh Good! (No really I’ve seen all the others, multiple times in some cases. There is something wrong with me.)

Normal service resumes from tomorrow onwards. Back to the triathlon stuff and upcoming race and I’ll keep the comic books to myself. I feel better for this! Outside of training and racing if you really want to get a long conversation out of me ask about comics. I can cover manga, bande dessinee a little, not too bad on Brit comics, pretty good on DC, OK on Marvel and can hold my own discussing indies!