Will Ride for Coffee

My reputation for coffee consumption has followed me around the world. My ability to consume large quantities of strong coffee has been noticed and received comments. My mate even brought back a second Cafetiere for me, it’s about right for 2 large mugs of black coffee at breakfast. I’m not sure whether it’s obvious or it’s just cyclist thing, but Adam, the Kiwi I rode with the past 2 days has promised to send me some local coffee from Wellington. Apparently it’s very, very strong and good stuff. Hopefully you can actually send that through to Oz, not sure if they destroy that sort of thing for not being Australian! I’m looking forward to it, anyone who offers me good coffee can ride with me anytime.

Back when I was training full time in the UK I grumbled a little about the lack of people out riding. Out here it’s really not been an issue. Apart from the guys I know I’ve ridden with a local roadie, a guy from Melbourne on holiday here and of course most recently Adam. There are plenty of friendly cyclists out here and often of a good standard too (watch them drop me powering over hills). It all helps the time pass on the longer rides and you can get some decent training in at the same time. Showing Adam the route up Springbrook was a case in point, it’s not really steep but it goes on for a good few Ks, reminds me a little of some of the climbing I’ve done in France. The reward at the very top, after a nasty sting from a 10% section, is some fantastic views back towards the coast. Or alternately you could reward yourself with coffee and cake at the cafe, but not this time too focussed on training. 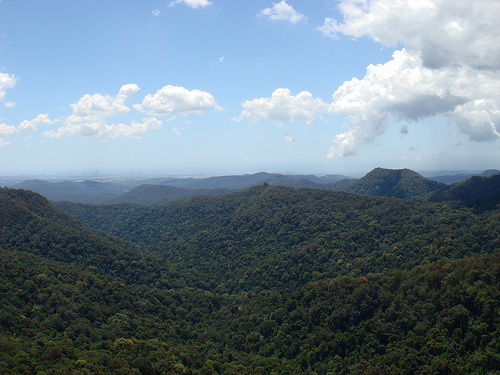 This weekend a group of us are heading Westward for rolling hills. Based on the last time we went out I expect my legs to be spent by the end of it. This could all become much more interesting come Sunday when I’m now entered into a 10K run just over the border in New South Wales. I don’t expect to be up to much after a week of training, but we’ll see. I’ll be heading down with Michael, another Brit who lives out here. Queensland doesn’t operate on daylight savings either which means the 8am start in NSW is the same as a 7am start here. I’m used to being up at those times now though and it gets it out of the way early so I should have time for a ride and a swim too! It’s another training race, just this time really off the plan.

Two days seems to have been enough to get the race out of my system and I’m feeling largely back to normal. Normal meaning tired, but getting through the workouts. Swimming is picking up a bit again and whilst 4K sessions can get a little boring I’m getting through them OK. In the pool I genuinely feel more comfortable in the water than I have in a long time and the higher volume is working for me. It didn’t translate to much at the half on the weekend, but I think it’s early days. I’d say I’m swimming as well as I was when I felt I was at my best 18 months ago. Hopefully I can make the next step up from this and get faster still. Western Australia may be too soon, but next year I’d like to see a 55 minute Ironman swim.

I’m having to be patient with my cycling, it feels a little stagnant right now, a little plateaued perhaps. Looking at my data from the past year I’d say I’m in a similar condition to what I was in April. Probably not a bad place to be now as by late May I was getting to be my strongest on the bike. The Gold Coast offers a variety of riding, from flat to long climbs so I’ve everything I need to train here. I am sticking to the principle that consistent high volume cycling with an amount of hard efforts will get me back where I was before. If I look at the first half of the year, a number of trips to mountainous regions were key factors in boosting my cycling. Regular hill work here is going to be a mainstay of my regime.

I use some of my free time and my walks to and from the pool to listen to a number of podcasts on endurance sports. There’s some really good stuff out there, ranging from general advice through to interviews with coaches and athletes. I’ve heard a few people refer to being a student of the sport as part of the process of reaching the top levels of endurance sports. I like to think of this as my attempt to be a good student. Certainly it gives me a lot to think about, hearing what top coaches and athletes do in their preparation. Deriving principles from the specifics can be tricky though, there’s so much variety and no one way to approach this.

This is where a coach can help. Being coached means you put your training into their hands and trust that their approach will deliver the results you want. Being self-coached means I’m putting my trust in my ability to choose a training approach and to evaluate my own performance. Evaluation can actually be the trickier part, drawing out a program isn’t so hard really, adjusting it based on performance becomes much trickier. In part this is why my approach favours a basic week and a high training volume. In terms of structure these are easy to do, there’s nothing more sophisticated than a principle that you do something a lot and your body adapts to be better at it.

In my opinion when you listen to top tier athletes or coaches you find a couple of things, they’re consistent in their training not losing much to injury or external distractions. They either have done or currently do a lot of training or a sufficient level of work within their plan. I know a lot is said about training smarter and junk miles, but when you have a lot of time available for both training and recovery it seems to me a lot of people just simply train a lot. I can’t say it’s for everyone and certainly it’s a road to injury and fatigue when you start out, but with long endurance events there comes a point where you simply need to be training a whole lot.

Originally I was going to write something about running and the plateau I feel I’ve hit there (along with possible ways past it). Somehow that transformed into my thoughts from being a student of endurance and I guess a degree of justifying the program I’m following. To wrap this one up my approach is volume based. A high amount of training week on week, not at Epic Camp levels, well not often at least, but the odd really big week is no bad thing. As a self-coach I’m watching that the level of stress and fatigue I put on my body is enough without making me too tired to put in the effort needed. I’ll freely admit I have my doubts at times, but consistency is key and you can’t keep chopping and changing.

On that note I’ll end this post with a promise that next time I’ll simply stick to the facts of what I’ve been up to. No navel gazing about my training plan or ponderings on whether the training I’ve done this week has been any good. Just the facts.