Combine yesterday’s late night with this morning’s early start and I was too tired to contemplate an early run. It’s taper lethargy when each workout seems pointless and getting out the door is a struggle. I was genuinely tired and with little to gain from a run I made an executive decision. I spent some time examining my taper plans and lightening the load further. 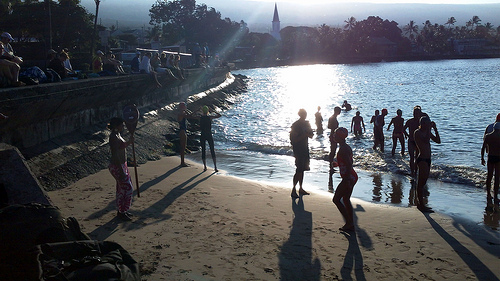 At seven I dragged myself down to the pier to be greeted by a beautiful morning. The sun wasn’t enough to motivate me, but the Coffees of Hawaii boat was. I stuck my camera down my speedos and swam the 400m to their boat.

What could be better than floating in the Pacific sipping on espresso? I know, but they couldn’t do a cappuccino. The boat is a highlight of race week and usually a good opportunity to bump into friends. My swims for the next day or two will likely consist of nothing more than a coffee trip.

I met Steven at the boat and found he’d suffered from a similar lack of motivation. Having drunk our espressos I followed his feet back to the beach so we could enjoy coffee on dry land. Nick, Laura and Andrew joined us and we discussed a variety of topics including caffeine in racing.

I’ve never been willing to drop caffeine in the taper for a race it’s impact has always been minimal. Gwen at Kope Lani commented that she remembers how we’d drink six shots of espresso in an evening before heading home. I’d still sleep without a problem! Take caffeine out of my diet as I do when sick and I suffer no withdrawal symptoms either.

Then again caffeine effects performance, there’s a reason WADA restricted it for a while. I’ve yet to find a caffeinated gel I can stomach as they’re generally too bitter. I can’t tolerate coke when running either as the slightest hint of gas will upset my stomach. The result is I train and race with no caffeine other than the morning coffees.

Registration opened at nine and as is tradition I headed over early to get the job done. It means queueing, but I find myself less stressed once the wrist band is attached and I have the goodie bag. The weigh in was the only bottle neck to the process otherwise it’s painless. I’m not giving out the weight, higher than I’d like, but in the right range.

Now officially racing I made my second trip to the A.R.T. massage tent where Kim did some fantastic work on my calf. She found some gunk between the two muscles (the technical term I assume) causing adhesion. The great thing with A.R.T. is it’s effective, but doesn’t beat you up so after having my legs seen to I was able to join Laura for a spin on the bike.

Based on the number of people overtaking us on the Queen K we got the pace just right. It was all about checking my bike worked in its race setup and keeping the legs turning over. There’s nothing I can do now to improve my fitness. What I fear more is wearing myself out before I actually need to perform. I want to be fresh when I hit the headwinds on the return from Hawi.

Today’s schedule was packed. Not long after the ride I was over at the Biestmilch house being interviewed for their website. At some point in the coming days my interview will be alongside those with the likes of Macca and Yvonne Van Vlerken! It’s great to be involved with a company that takes as good care of it’s age groupers as its pros.

I wasn’t finished there was still the Parade of Nations. A fun opportunity for athletes to give back to the local community. Locals and tourists line Ali’i Drive as we walk from the King Kam to the Expo. Everyone seems to enjoy it and it’s disappointing that more don’t make the effort to join. 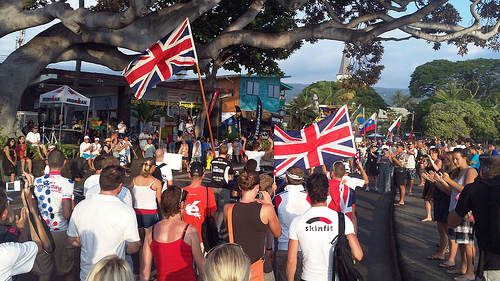 It’s also an opportunity to meet some of the other British athletes here to race. It was great to chat with Lou Collins here for the first time following her amazing race in Lanzarote. She’d heard of me even if she couldn’t remember passing me on the run in Puerto del Carmen! I tried to convince her to race Challenge Henley next year, she seemed tempted.

The parade finishes at the entry to the expo right next to the Powerbar stand. Unfortunately this placed me right next to the far too tempting Protein bites and energy bar samples. At least I’ve weighed in, that’s my race weight whatever happens!

I browsed the packed Expo stopping at Compressport when I recognised Rudi Mester from Compressport Oz. I’ve met him at every Ironman Expo Down Under and he’s taken some great race photos of me. He remembered me despite the lack of a mohawk and gave me a visor to wear on race day. I’ll be wearing the calf guards too though want confirmation we can wear them in the swim.

The day came to an end at Splashers for dinner with Laura and Andrew. I stuck to healthier options saving the burgers for after the race. With all the chasing around over it’s time to focus on relaxing, resting and getting ready to race.