The big week is over. My first 4 weeks of training here is done and I’m looking forward to the easier load of a recovery week. If you don’t have much interest in reading about my training, this isn’t going to be a post for you. As it’s one month here tomorrow I’ll be writing a more general one month in post in the next few days. Having just completed the first big week of training, a satisfying 40 hours of swim, bike and run that’s today’s focus.

A while back I wrote about the basic week and how I’d be sticking to that as the core of my plan. I spoke of not fussing too much over the details and intricacies of the plan. Since then I’ve plotted a basic week (and adjusted so it’s not quite the same as the last one I posted), then I’ve planned my training from my arrival in Australia, through to the World Long Course Triathlon in Perth next year. I broke training down into cycles of roughly 2 basic weeks followed by one push week. Each cycle then finishes with a week of recovery to let the training sink in. When I come up with a better way to get all this online than PNG files I’ll put a page up with it on. If anyone has some decent HTML for year and week planners I’d love a copy.

Back to the past week. It’s had its ups and downs both physically and mentally. I’d mentioned how previous big volume efforts had worn me down and the same happened here. It takes increasing discipline to get out the door when you’re tired. Fortunately with Kona having just happened I’ve got a lot of motivation from reading athlete blogs and listening to podcasts. In fact as I finished up my last run of the week I thought how I want it more than ever now. For all the mental lows, which to be honest weren’t that bad, I’ve finished this block more motivated!

Weather this week has been a little mixed. Always warmer than back home, but with showers and storms interrupting things. That in itself can be demotivating, I came here to get away from all that and train in endless sunshine! However I somehow managed to dodge the worst of the rain, never really getting wet except at the pool. In fact the only time rain had an affect was one swim session where the temperature dropped and it tipped down. I kept on going to my 4K goal for the session, got out and discovered the shelter I’d put my bag under wasn’t so sheltered. A soaking wet towel and trainers full of water aren’t the best when you’re freezing!

All that said when the sun has been out the weather and environment can be a great source of motivation. Saturday morning’s group ride soon became a solo effort as everyone cancelled. Nothing to do with me honest! So I decide to ride out down to Fraser Drive and then take a right which I’d been told led to some good rides. The first hour riding into the wind was a slog and I really didn’t want to be out there. Turn right at the top of Fraser Drive, descend and suddenly the wind didn’t matter so much.

I rode alongside a large, winding creek and over rolling hills towards a town called Murwillumbah (I have trouble with that name!) The sun was out, the roads were quiet and when I got there Murwillumbah turned out to be a picturesque little town rather than the bland designer village with strip mall I’d imagined. Unfortunately whilst long training rides let you see lots of an area, you don’t often have a camera to share what you see. Try to imagine an older, picturesque little town with nice little coffee shops that I might have stopped in had I not been alone and focussed. I rolled out of town and into the sugar cane fields to the south until I hit the half time.

So retracing my route should be straight forward right? It would also give me a decent ride without too many hills in. However just the other side of Murwillumbah I met 5 guys working together and playing sprint for the bridges. I picked up the pace and hooked on the back till we hit a hill and then I went for it. A burst of power and I was leaving them behind. A few minutes of climbing and I was thinking that I didn’t remember this descent coming the other way. A few more minutes and I was certain I was climbing up to Tomewin, which would get me home, just with a few more Ks climbing than planned. Having attacked these guys I couldn’t let them catch me so it was a tough hill climb all the way as the lactic acid burnt in my calves!

Let’s just say I felt the effects of that little bit of showing off today. This time I wasn’t alone having arranged to ride with Pete. He’s a solid biker and will attack climbs head on; also he had fresh legs having ridden twice in the last 2 weeks! On the other hand I was on my seventh ride in as many days and pretty tired. He dragged me up Springbrook, well to be honest I didn’t see much of him on the climb! I couldn’t match his attacks and just worked at the best power I could. Having up the road help motivate me to work the climb and after 15 minutes my legs started to get into the swing of things and I picked up pace. We rode up to the Fudge Shop rather than all the way to the top then headed back home.

I was glad to have made myself push through the fatigue and get something out of this. Chatting with Pete about training and how our heart rate responded on the bike was interesting. I’d found as the week went on proper, long climbs were the best way to get my heart rate up above 120 beats on the bike! Otherwise on the flats it was hard to get my legs to do the work needed to go beyond that point and it’s not like I was dawdling all the time. Pete will be helping in my recovery with a massage next week and then hopefully we’ll be running some local trails next weekend. 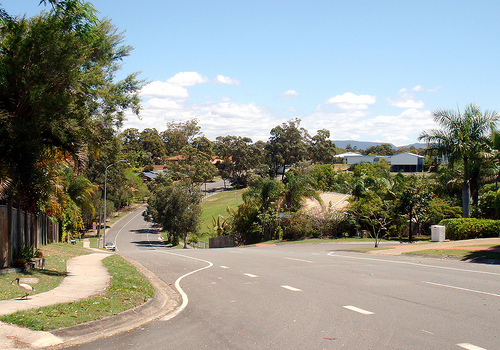 That’s the start of ‘The Loop’ as I’ve imaginatively dubbed it. It’s a 2.7 km hilly circuit just outside the house that now forms the basis of my brick runs. All this week I have run 2 laps of The Loop off the back of each bike (well, 1 lap on easy bikes) no matter how tired I felt. I’ll be going to 3 laps for my basic week from now on and 4 laps in the next big week. After a couple of weeks of adding brick runs off every bike I think I’m starting to feel the benefit. Just one other thing to say about my running. Combining these bricks with my normal run training has led to a massive 140km of running this week! I’ve not done mileage like that in a long time and my legs held up fine. We’re not talking sprinting here and I’ll admit the quality may have dropped towards the end. It feels great to have put down that much distance though and to come out the other side still feeling pretty good. It’s another confidence boost and motivator moving forward.

Bringing this all to a close it’s been a really positive first 4 weeks of training. I’ve raced twice and done quite well even without full tapers. I’ve kept the hours up well and executed a good push week. You can look back on things and think I could have gone harder here or I wasn’t trying there, but that’s always the case. There’s been the volume I wanted and in that I’ve put in some decent intensity. It’s been challenging in places and I’ve been pushed at times but it’s all good. I’m entering recovery week feeling fitter and more motivated than before. I get a week now to refresh and take on board what I’ve worked at so far.