☰
Home > A Day Off Round Brisbane

A Day Off Round Brisbane

Something different to usual, no training a straight day off and a bunch of pictures to accompany it. Thursday was my full recovery day, a chance to relax and forget about training (well mostly). So I headed off up to Brisbane for the day for a little bit of shopping and to see the sights.

The great thing about a recovery day – I got to have a lie in and didn’t set the alarm for the usual 5am. What isn’t so good is you become habituated to waking at certain times anyway so I was still up pretty early! We’d had a massive storm yesterday afternoon which stopped me going out on the bike and originally I’d planed to make up for it before I went to Brisbane. It’s easy week though so that plan soon got dropped, the weather has been surprisingly cold of late (for the region) – a bit too British for my tastes. Instead a leisurely breakfast and then walk to the station.

I spent the morning shopping. I had a couple of specific items I wanted to get hold of. Firstly some trail running shoes ready for the weekend, my current pair of Salomon shoes are pretty much on death’s doorstep so a nice new pair of XT Wings was in order! They’re surprisingly hard to get hold of over here, I don’t know anywhere on the Gold Coast that stocks them. Fortunately there’s a store in Brisbane which carries them so that was my first stop.

I don’t know what it is about the store, but it seems to attract staff who like to tell you how good they are at racing. Last year I had a long discussion with a kid which mostly involved telling me how my race bike wasn’t that good, how his sponsored bikes were amazing and how good he was at racing (somehow without giving any specific results). This time another kid told me about some of the amazing races he’s done. To be honest, could be the same guy, I don’t remember him that well. Anyway the net result was a new pair of bright red shoes!

Shopping done I treated myself to a big lunch which did involve New York Baked Cheesecake. My last experience of lunch in Brisbane had not been so good, at least this meant I knew which restaurant to avoid. I tried a place called Milano’s in the middle of the main pedestrianised street in Brisbane. It’s pretty good, not that cheap, but the food and coffee was excellent. Especially that cheesecake! 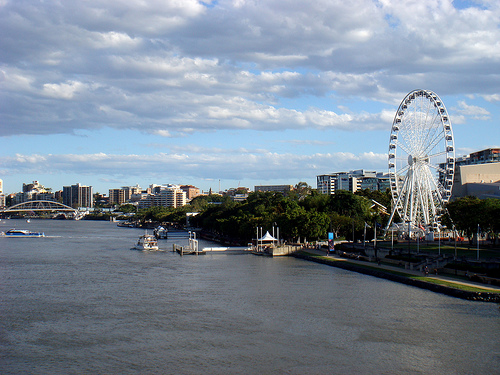 Then I walked over to the South Bank to exercise off the food and do the tourist thing. Brisbane South Bank is very nicely developed with an attractive Arbour walkway stretching from its museums to the attractions of the South Bank. 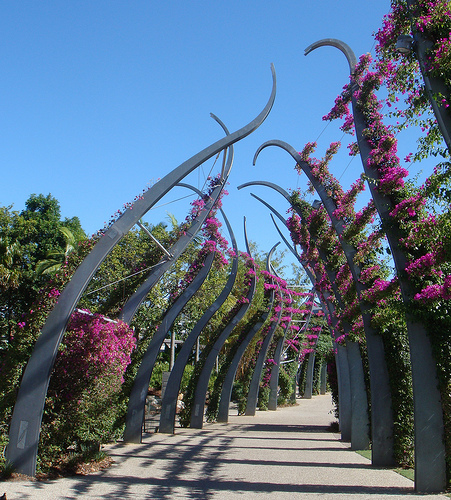 I did deviate off to visit the 2XU store. Yep, a whole store just for the 2XU brand, all very boutique like and a little sterile to be honest. Still I got a new race top whilst there which will get a test run in Noosa next week. 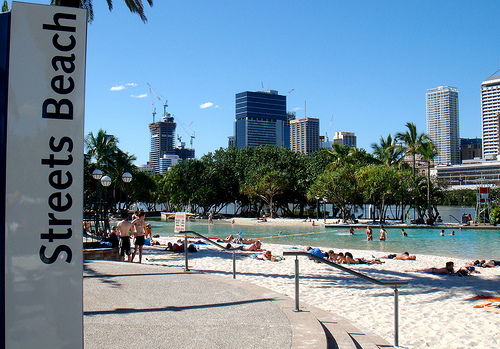 Given it’s a few kilometres out of the city to the nearest beaches they decided to build one on the South Bank. Seems it’s pretty popular too, though really if you want the beach that much you’ve got the Gold and Sunshine Coasts on your doorstep. 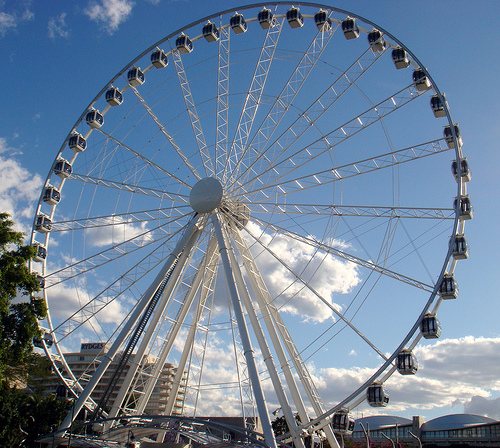 Ever since London built the London Eye the whole ferris wheel thing seems to have really caught on. So here’s Brisbane’s answer to it. I didn’t go for a ride myself, instead I opted for the budget tourist attraction of a City Cat Ferry ride. $5 for as may hours of riding the ferry as you can take. 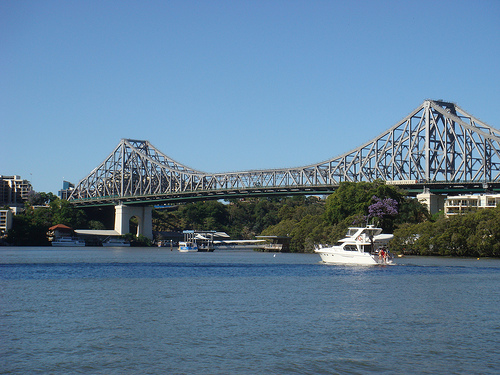 I travelled east towards the mouth of river, a 90 minute round trip roughly. There’s plenty to see, though I’m sorry to say I didn’t take photos of the nude woman on the back of an expensive boat. She didn’t seem at all embarrassed to be caught naked, in fact quite pleased. However I want this blog and my flickr stream to remain PG! 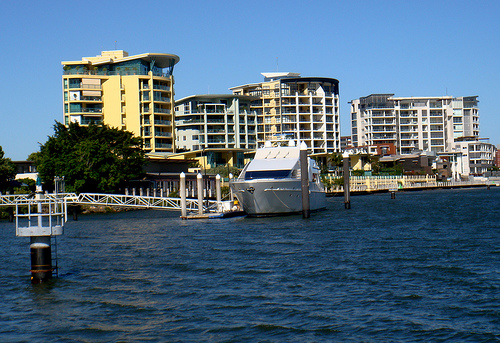 Like most city riversides there’s a lot of wealth on display and living right on the bank doesn’t come cheaply. 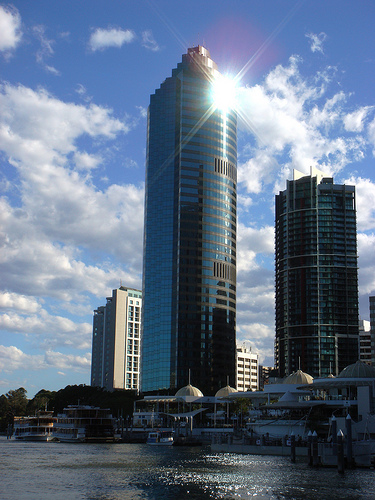 The CBD is modern with lots of tower blocks in metal and glass. Like most of the eastern half of Brisbane I just passed through on the boat, not stopping off. There looked to be some quite upmarket restaurants in the region though, it out of my price league now!

Once schools were finished apart from numerous children commuting home by boat you started to see groups of rowers out training on the river. A few got a little close to the ferry dock prompting some choice words from the ferry pilot.

I finished the day with a second helping of Cheesecake at a coffee shop. Have to say I was slightly disappointed with both cheesecake and coffee this time. Partly I think from a bit of an overload of sugary foods that day, my body isn’t used to that! Then it was back home on a packed commuter train with no free seats, just like the old days!

It was good to have a change and I’ve come back from it feeling refreshed and eager to get back into training again. I slept well last night, in fact I overslept my late alarm! Once I was up it was quickly out for a run to the beach in the new shoes. They’re designed for off-road and certainly felt a little stiff for the pavement, but they went well. Can’t wait to give them a proper trial in the trails around Nerang tomorrow, should be great.