Fortunately not for me, but for the bike. Not one, but two failures due to wear and tear. It’s hampered my plans for a decent weeks training and turned this more into an easy week than anything else. When I have been training I’ve tried to ensure a good session, but I’ve only sat on a bike for 5 hours this week!

Things started off well on Wednesday. Back on the Coast and the weather is better than forecast. I made a long run the main session of the day. The full distance up to the spit, right to the very end where you can look back on the whole of the Coast to the south. I was pretty pleased I held a good pace throughout and didn’t feel too bad come the end. Onto Thursday and a good swim (which was a nice change) with the afternoon being a hilly bike ride. My aim was to revisit the Tomewin route which last time had been undermined when I blew in the first 20 minutes!

I’m happily riding along the Connection Road section before I hit Currumbin Creek Road. As it levels out during a climb I decide to shift to the big ring to keep the power up. Nothing happens. So I click up and down a few more times, but still nothing. Then I notice the rusty frayed wires from my front derailleur cable. I can’t quite remember the last time these were changed, but it’s easily 10-15000km ago! At least for the subsequent hilly section I wasn’t stuck in the big ring. When I descended into Currumbin Creek I turned back to take the flat route along the coast. What should have been 4 hours of riding ended up at 90 minutes. 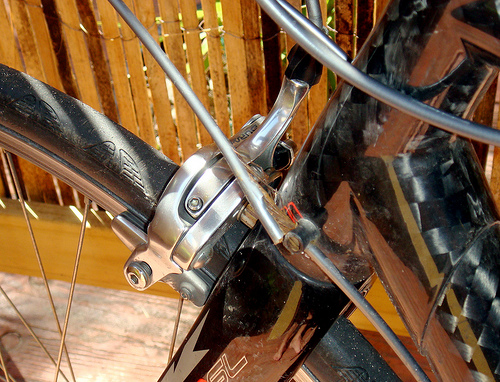 Frustrating, but the good news was Mike’s Bikes could get a service done for me by lunch the next day. I decided the cable was a sign and it was time not only for new cables, but a general clean up. The bottom bracket has been creaking a lot lately and the rear derailleur shifts like crap (the cables I know!)

Despite knowing the bike was in the shop not having it in it’s usual place back home prompted occasional ‘My bikes stolen!’ thoughts. Having swum on the past 4 days and getting some good results by Thursday I opted to take a rest from swimming and go for another long run. Hit by a massive lack of imagination I headed back towards the spit, not quite to the end, but getting the most from the dunes section. During the last half hour I decided to inject some short high pace efforts. They felt surprisingly comfortable. I came home pretty happy to have got two decent length runs in this week even if the biking was suffering. Still the bike was ready and that meant this afternoon’s ride was on!

Heading back from the shop with a rejuvenated bike I stopped in for sushi. I said I’d get addicted! What I didn’t know then is that there’s a restaurant 5 minutes from my front door and they have a loyalty scheme! The foods good too so it’s an all round winner for everything but my bank balance.

It’s starting to get dark earlier which left me 3 to 4 hours maximum for riding. I chose the hilly Kennedy Drive route. You ride down the coast and into Tweed Heads, from there you follow Kennedy Drive to Bilambil and then over to Terranora. Once you pass Tweed it’s lots of hills of varying gradient. Despite a fair volume of running my bike legs felt fresh so I spent most of the ride really pushing myself and climbing as hard as I could. When you hit Terranora the climbing is largely over, there’s a gradual ascent before you descend back towards Tweed Heads. It’s big ring stuff though.

There’s a small shop a little way up the route and I decided to pick up a drink. It’s been warm and humid and I’d got through my fluids pretty quickly. Among recent addictions is one for Vanilla Coke. The added vanilla makes such a difference, but it’s damn hard to come by round here. The shop was closing up, I’d forgotten that New South Wales is an hour ahead of Queensland. They were also out of any kind of coke let alone my favourite. I took the opportunity to try some V. I know others use it for an energy and caffeine boost, I’d assumed this meant it’d be vile like Red Bull. Nope, it’s actually pretty nice! I have to go back to the shop to pay for it though as the woman didn’t want to change my $50 so let me have it! Very trusting.

Incidentally, on the subject of drinks, what’s the point of Coke Zero? Having to wander about taking things to the bike shop I’ve been buying more drinks. Not having trained like normal I didn’t want the calorie hit of full fat coke and without the vanilla coke to tempt me (they need to make a diet version) I’ve been on the diet. I finally tried Coke Zero for the first time and it’s got maybe 2 calories less than diet coke, but tastes worse. So why? I checked that it still had caffeine in so it’s not as pointless as caffeine free diet coke at least.

Sorry, back on topic. I had a fantastic ride on Friday a combination of rested bike legs and motivation from a freshly serviced bike. I think I should also mention that one benefit to come from recent hard training weeks is a greater confidence in my ability to sustain an effort. I’m more willing to work myself hard on a ride when in the past I think I was holding a little bit back. Hopefully this can only help me improve over the coming months. I’ve seen where I need to get to and it’s going to take more work to do so.

Friday’s ride is done, it was good, in fact all is good again. My plan for Saturday was a 5K swim first thing then a 6 hour bike in the day. Maybe the swim wasn’t first thing, but it wasn’t far off and all my bike stuff is laid out for a quick start to the ride anyway. The swim goes pretty well, a lot of interval work and my pacing is good considering the number. There’s a period of heavy lane sharing whilst the aquajoggers get in the pool. They need 4 lanes apparently! There’s something a little malevolent about them, especially on the deck prior to their session. They seem to have decided the best way to deal with the swimmers is to pretend we’re not there and leave no room for us!

When I got out the pool the day was warming up nicely and I contemplated my options for coffee and brekkie before the ride. I wasn’t going to go to my usual as it’s busy at the weekends and the waitresses were commenting on how often I’m going! A good sign I need to cut back. The debate was rudely halted as I started to wheel my bike out. The rear wheel ground to a halt. Weird. Obvious thing to check was the brake blocks rubbing, nope but right there by the brakes the rim was burst open. Now to be fair I’d been warned in the past and I’d been trying to put it off. The dishing on the rear rim was bad, bad enough it looks like the tyre pressure blew it apart! For a moment I wondered if it was the actions of the malevolent aquajoggers! 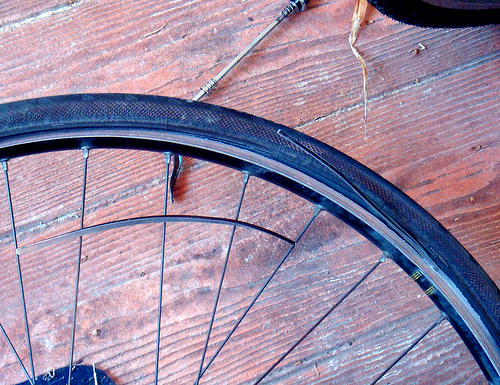 All of today’s plans changed. I had a pair of thongs in my bag so I could comfortably walk home. I also considered how I was lucky it burst whilst I was swimming and not descending down the other side of Tomewin like I’d planned. Aside from avoiding any loss of skin or worse I was also within a walking distance of home. Got to look on the bright side right? Instead of a ride I spent the day mostly walking. Taking the bike home, then back to Mike’s Bikes with the wheel. At the very least busting my wheel like that led to entertaining conversation in the bike shop. Finally back home where I found a shop selling vanilla coke on the way…

They should have a new rim in stock in the next week so I’m not missing my wheel for too long. I have my race wheels to keep me riding so a full scale disaster is avoided! I won’t have any power data for the next week which is a little frustrating. I’ll be working off heart rate instead. I guess it gives me a chance to test out the race set-up if nothing else.

It’s 4 weeks to Ironman Australia now. Not long at all. I’m a little disappointed that I’ve had a real up and down of quality weeks and mediocre weeks of training. It puts a small element of doubt in the back of my mind. I’m sticking to focussing on all the times I’ve been pleased with training recently. Those mediocre weeks have maintained my fitness at least and the others have built me to new levels. This next week I aim to get one final hard week in. The following week I’ll start tapering back though at least initially not too much. That’s all I can do now, then as before it comes down to getting myself fresh for race day.