☰
Home > Slave to the Machines

Slave to the Machines

Apparently things come in threes. So my third bike malfunction happened just after the cattle grid at the top of Tomewin. The rattling as I crossed was enough to break my second Garmin mount and send my 705 flying. Once again I was fortunately able to retrieve the unit and it’s undamaged. I’m all out of spare Garmin mounts though. A minor break compared to the past two, but with interesting consequences.

The rest of Sunday’s ride and the two subsequent rides have been ridden blind. I have no idea of speed or exact heart rate, cadence or any other data I might normally have. It’s all being recorded with the Garmin sitting in my jersey pocket so I can look when I get home, but on the road the only way to know is to dig the unit out whilst riding. I now have three rides all ridden 100% on perceived effort and actually I like it.

Sure I particularly miss the power data at the end of a ride (that’s waiting on my wheel repair). However with the right mindset it turns out having absolutely no data is actually motivating. I am pretty sure I have been riding harder without numbers in front of me than without.

It started when I lost the power meter. I had a suspicion it would happen. Lately my riding has been a little more aggressive anyway, I’m willing to push myself harder and for longer. I put this down squarely to being fit and having a little more confidence in that. When I knew I’d be riding without my power meter subconsciously that meant I needed to ride harder to ensure I wasn’t slacking. Shove race wheels on the bike in place of training wheels and mentally I’m practically at a race!

So that Sunday ride as I head out bike practically ready to race and with legs fresh from an unexpected day off it was no surprise to quickly hit a strong pace. Once the Garmin went flying and I no longer had speed either that was even more incentive. I hammered it back up the Tweed coastline. A final bit of hill work to revisit the shop and pay for the V they gave me. It was closed for Sunday afternoon and being in NSW an hour ahead of my watch too. Then it was hammer down again to get me home, well until I realised traffic was getting to heavy to keep the pace up. I am definitely far more paranoid on Aussie roads!

One off wouldn’t be too surprising, especially with the rest day before. Everything comes in threes though. Monday I set out for another ride, my legs felt pretty rooted though. However along with training I had the objective of paying back my debt. So back once more through Tweed Heads and to the shop. This time it was open so I settled my account and got another V in the process. Once again I rode hard though, putting lots of effort in on both the climbs and the flats. The tired legs vanished about 15 minutes into the session only to return when I stopped (in time for the planned run in the evening).

If I thought my legs felt bad on Monday I should have waited till Tuesday. A simple hours run on the flat with a couple of short but nasty hills in was enough to leave me feeling pretty done. Still I set out on the bike and headed inland as the cyclone influenced winds were a bit strong on the coast. The plan was to revisit Springbrook, though with the way my legs felt I wasn’t really sure how that would go. I cruised over, really not putting in too much effort at all.

After a pause at the picnic area at the bottom of the main climb I checked my watch and headed up. Having no data it was all down to working as hard as I could. My left leg has been playing up with a familiar ITB tightness. These days it mainly manifests itself as a knot in my hamstrings though. As things got hard I could feel it’s presence and had to push past it to keep the pace up. My motivation was simple, I had no speed or power to go by so I just wanted to get a time for the climb. I don’t usually bother with the full length, just doing the half hour or so to the bus stop at the first plateau. Not that it was half hour yesterday. Despite the grumbles of fatigue and discomfort in my leg I did it in 24:40.

I should say I have absolutely no idea if that’s a decent time or not. I’m pretty sure I was climbing harder than I have before and that it’s faster than I’ve done before. I’ve looked back in my training logs and whilst I never noted climbing times checking the data supports this. Of course in retrospect I wish I had a powerfile for this climb!

What’s the conclusion from all this? Not much really. When I get a new Garmin mount and my wheel is back the computers will be back on the handlebars. I hope at the least though I’ll know I can go that little bit more again and won’t allow them to hold me back. I think I’ll also be leaving them at home sometimes or at least covering them up for a ride. For me there seems to be something in not seeing the numbers. I don’t want to be going too easy and end up overcompensating! A little bit of hard work never hurt though, just a shame it doesn’t add to the pretty graphs in Training Peaks. 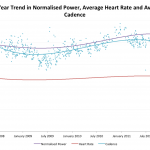 Training by feel or by numbers? 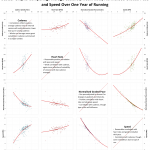