It started with a distraction. As I plotted the four year performance management charts side-by-side I was – as usual – side tracked. A blog post and discussion of using the new Garmin 910XT to measure swim metrics was far removed from the topic, data collection being the only common theme, but my experiences with the Finis Swimsense drew me in. Conversation on how you could utilise stroke rate information turned to the broader topic of cadence applied to swim, bike and run; from utilising a stroke rate ramp test to applying the principle to the other disciplines. Would a structured ramp test of cadence be worthwhile on the bike? I suspected not and with 765 separate ride files already in use building my charts, I had the data to look deeper.

I have never specifically worked on cycling cadence. I’ve simply concerned myself with developing the power I can sustain for a given distance and let cadence follow, whatever felt comfortable. In my case that’s a relatively low cadence, I don’t spin in training, preferring to push a big gear; it works for me – bike power has increased over time and my run performance relates more to fitness than the cadence I hold for 112 miles. Reading the comments of other coaches and a handful of papers suggesting cadence should vary according to the type of cycling has helped solidify my view that for long distance time trialling what matters most is sustainable power, cadence can be a distraction. 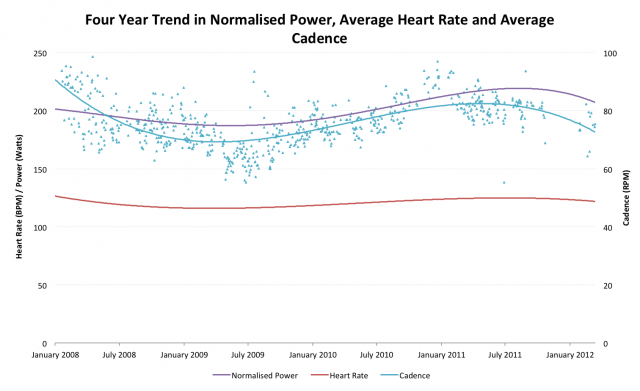 Still focussing on four year trends, my first consideration is the pattern in cadence over that time using the average cadence from each ride. As usual there are limitations, ride averages incorporate freewheeling and terrain will have an impact – when I ride in the Pyrenees I’d expect a lower cadence up the steepest mountains and freewheeling during the descents. With no easy way to summarise the information more accurately, I have to accept these limitations and hope the dataset is sufficiently large to prove useful.

Cadence takes a curiously sinuous path from a high start in 2008, dipping to a low during 2009, before rising into 2011. In part, as is often the case, the product of my training – until June 2008 I frequently used a turbo trainer, during 2009 I mainly put in long steady miles outdoors and I started 2011 with a winter riding only in the little ring. Throughout this period the average heart rate for any given ride has remained largely unchanged and overall the normalised power has risen, taking a similar path to cadence. The routine turbo sessions of early 2008 would have higher normalised powers, in their absence I was simply riding harder during 2011. What interested me was how power and cadence seemed to track each other. 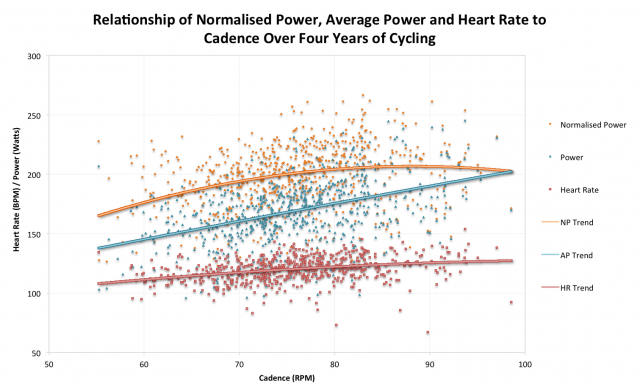 Slicing the data in another direction – a quick scatter graph – seemed to support that increases in average cadence were matched by increase in power. Anecdotally this matches my perception that I tend to spin faster when putting in an effort; a Maximal Aerobic Power test (not in the data set) had shown an extreme of this – I averaged 100rpm throughout. So in self-selecting cadence it seems I have a slight tendency to pedal faster when I want to go harder, like I am tuning the RPE to match the output, but it isn’t a strong instinct, I appear most comfortable around the 80rpm mark. 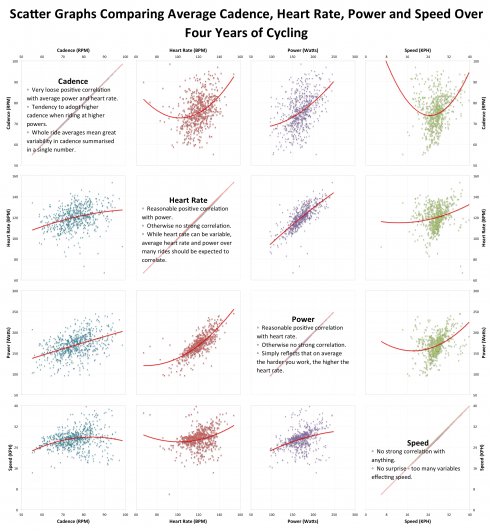 The data is there for the comparison, so why not cross reference cadence, heart rate, power and speed to see what I find? Unsurprisingly speed tells me next to nothing, as ride metrics go it’s a poor measure of training, too dependent on external factors to say anything much about fitness. Power and heart rate trend well together, the best relationship on the chart, with the tightest distribution; not surprisingly, averaged over many rides we’d expect that higher power means a higher heart rate. Again cadence trends a little with power, and perhaps heart rate, but as before that correlation is comparatively weak.

An interesting detour. Plotting the data does nothing to change my view, the patterns I see are largely what I expected, though the way my cadence varies over four years is surprising. There is certainly nothing here that will change how I train – I’ll continue to regard cycling cadence as largely a red herring, power matters more to Ironman performance. And I remain convinced that a specific test session of cycle cadence will be largely uninformative.

Finishing with a second anecdote, riding with power for a number of years I’ve played with gearing and seen many occasions where a shift up or down by a single cog could produce a jump in power with little change in perceived exertion. It doesn’t always last and during many intervals I’ve found myself shifting between two gears, adjusting cadence back and forth, as each in turn feels more comfortable. All the time holding my power around my target, but cadence varying according to what feels right. I’m comfortable and I’m riding well, I’m not convinced time spent training towards riding that power at a specific cadence would be a good investment.