Exactly the Same, only Different

I’ve had a few days to settle in to life back in the UK now. After six months away things haven’t really changed much, except for all the little things that are different. But then a lot of that is just me and what I’m used to now. A few more days and once again not coating yourself in suntan lotion before going for a swim will seem normal. I’ll come back to swimming shortly as it’s one area where some differences will never feel right!

The weather has been pretty nice (though that seems to be about to change). A little bit colder than I’m used to and I have to admit I keep making mistakes with clothing either a bit too much or too little. Once out there I’m riding well though, nothing too long yet, but at a decent pace. Not having had a chance to properly buy food yet I’ve been fuelled by Hot Cross Buns mid-ride. Pleasant, but possibly not the best energy food!

I’ve been exploring some of my favourite short routes in the area. It’s nice to discover some of the roads have been resurfaced. On the other hand for all the repairs there’s a lot more potholes than I remember. I’m no longer certain that Aussie roads are worse than UK roads. Whilst we don’t have much open chip roughness we have massive potholes all over the place. Traffic is definitely higher and so far I have a few close encounters with other road users. I particularly appreciate the business removal truck who needed to get past me so much it was happy to nearly push me off the road today.

What is fun though is how some of the steep sections I remember don’t seem so steep anymore. That sort of difference I like. My hill climbing and particularly my ability to handle short sharp rises improved a lot down under. The local rolling terrain seems a lot less rolling now – I guess after kiwi rollers most other terrain is flat!

I’m sneaking running back into the training. It’s the easiest way to get to and from the pool each morning whilst I’m too lazy to fix up the fixie. It’s not too far, about 3km each way which is ideal right now as it’s too short to do any harm, but gets me running. New trainers too which means all of a sudden I have cushioning again!

Once I enter the pool this is when I really miss Oz. Firstly there’s the cost of swimming I’m paying at least a pound more a session here. If that got me amazing facilities I’d not be complaining. As it is I’m back at my local Victorian pool which I’ve used since I was a child. I forgive it some of its flaws out of sentimentality. There’s the quirk of it’s 27.4m length meaning I do 110m reps rather than 100m. You have to get used to adjusting everything by 10%. It’s temperature a little bit too high sometimes, cold others or like today with a nice strong gradient one end to the other. The poor guttering and lane lines ensuring the water is constantly choppy. I could go on…

However what really makes the pool are the inhabitants. In fairness so far it’s been fine really, not as busy as I feared. Labelling lanes according to speed seems pointless as a few people seems to choose entirely on a whim. They’ve not complained if I swim by though so that’s fine. The oddest experience so far is the old man obsessed by my watch.

Usually I don’t wear a watch in the pool. Shamefully this was for an even tan in Oz! Really yeah, I was that vain! Aside from that I just prefer swimming without one. For some reason I ended up swimming with it on yesterday. Not a big deal.

In the fast lane is a young woman doing slow breast stroke, me and an old guy swimming slow front crawl. Things seem fine and I wonder if it’d be OK for me to get the paddles out. The young woman stops at the end of the length and stands in the middle of the lane. Then the old man comes down and very awkwardly turns taking the time to tell her she should stand to the side or it makes it confusing to turn at the end. Fair enough, I prefer that. I try to give him a look to show mutual appreciation for his concern. Unfortunately it seems I have made an error too.

He says to me “that’s a dangerous weapon to have on your arm”. Apparently he’s quite concerned I could hit someone with my watch. I assure him I won’t (for a start if I did I’d have also hit them with my hand), but no with people going different speeds anything could happen. I think better of suggesting with his wide kick and sweeping arm recovery I’m in more danger from him and get on with swimming. I guess paddles would definitely be out.

At the pool again this morning and he turns up. Upon seeing me he pointedly says hello and comments that I’m still wearing the watch. I agree I am and he rolls his eyes and chuckles to himself as if to say “you’ll see”. I have to admit I’m now wearing the watch simply because I know it bothers him. It’s petty I know, but in my months in Oz I have swum with all manner of pool toys being used by me or others. Not once did I see anyone manage to cause injury to another. Suppose I did manage to hit someone with my watch, I’m thinking that it might hurt, but that I’ve also hit them with my hand and that’ll have hurt them too. I can’t really leave my hands behind when I swim either. So I’m happy to be armed and dangerous in the pool and secretly enjoy worrying this guy.

I’ve spun that into a long story to say I miss the quality and freedom of the pools in Oz. When the lake warms up enough I’ll be there as much as possible. I’ll take a territorial swam over pious swimmers any day!

Looks like rain tomorrow, it may be my first time on the turbo trainer in many months! This may be the first time I’ve looked forward to that too. 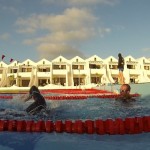 Saying So Long to the Coast