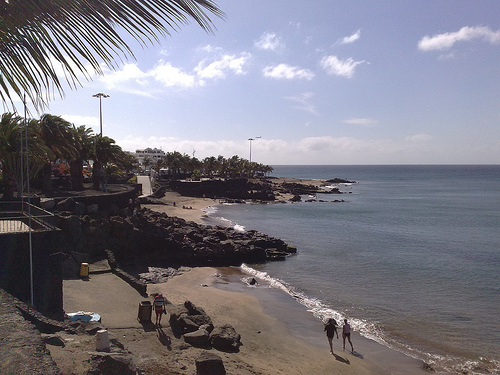 I’ve been looking forward to this all week – another beach day! An opportunity to relax and put in some solid effort on the tan. Having spent months in Oz most of my rest days involved the beach. It doesn’t make much sense back home, but rest days are stuck as beach days in my head.

I think I’m tapering. To be honest it’s harder to tell than you might expect. I have done less this week, that much is certain. At the same time WKO+ tells me I’ve not notably lowered my training load! This next week will definitely bring things down as I’m seriously cutting back.

Am I over doing it? I don’t think so. I feel tired at times, but not the most tired I’ve felt out here. Most rides I go out on now I have the capacity to ride strongly. I hope that come race day I can ride at my best for the whole of the course. In training I find there’s an ebb and flow over a longer ride, periods are strong, then you ease off. Something happens on race day that stops any slacking off.

I’ve been wondering on some of the rides why there’s such a difference between training and racing. How I manage to sustain just a little bit more power for a whole lot longer in a race. My concern is enough to have a night’s sleep interrupted by questions about up coming race performance. I was forced into a midnight examination of past training and racing data to see if I could see some signs. I couldn’t.

During the day I’ve got on with training as planned and felt pretty happy. Sure I have times where I don’t feel that good, but mostly everything is running well. I’m making an effort to keep my confidence up and not to worry about what’s going on around me. No wondering if the athletes out running the beach front are fitter than me. Or worrying when some uber-cyclist comes blasting past (least of all if it’s Ain-Alar Juhanson!) I think of how confident sprinters have to be in their ability to win and try to hold a similar positive mindset.

In between debating if I’m over doing it or whether I’m fit enough in general I like to worry about whether I’m under doing it! I fear that flat feeling I had in Ironman Australia. It would almost be worse than turning up on race day exhausted. A no-man’s land between peak condition and exhaustion where it seems you should be able to go faster and yet never happens. Whilst I didn’t manage the 28 hours of training that was initially on the cards for the past week, I hit about 22! I think it’s enough.

Before I hit the beach and enjoy the sun I’ll just dump the last few concerns on you! The winds. After 3 weeks here riding into strong winds has become normal. Then you get a day like Friday where things go a step further than normal and the choice of a Zipp 404 up front seems a lot poorer. I’m watching the weather closely and the signs so far are that it won’t be that bad. Otherwise I may well be riding on training wheels come race day.

I am leaner. I did the jeans test and was easily a whole belt notch tighter! Good news for the race, but on the other hand my eating has probably been a bit disordered to get there. I have the odd doubt about my nutrition at the moment and the slight worry that I might end up low on energy come race day! It’s nonsense really, but it’s there in my mind. To balance it out I also worry I might over eat and put on weight in my last week!

Ending on a positive I have had some good running out here. I would say it’s the best I’ve felt running in a while. I’ve been working on picking my cadence up a little and the effects seem very good. Perceived effort largely remains the same, whilst speed picks up. It’s not sprinting, but ideal for long distance racing. At it’s best I feel relaxed, fast and effortless. I’m trying to focus on those moments and then recreate them next Saturday.

A beach and the sun calls. More later this week when I’ll lay out my race plans.