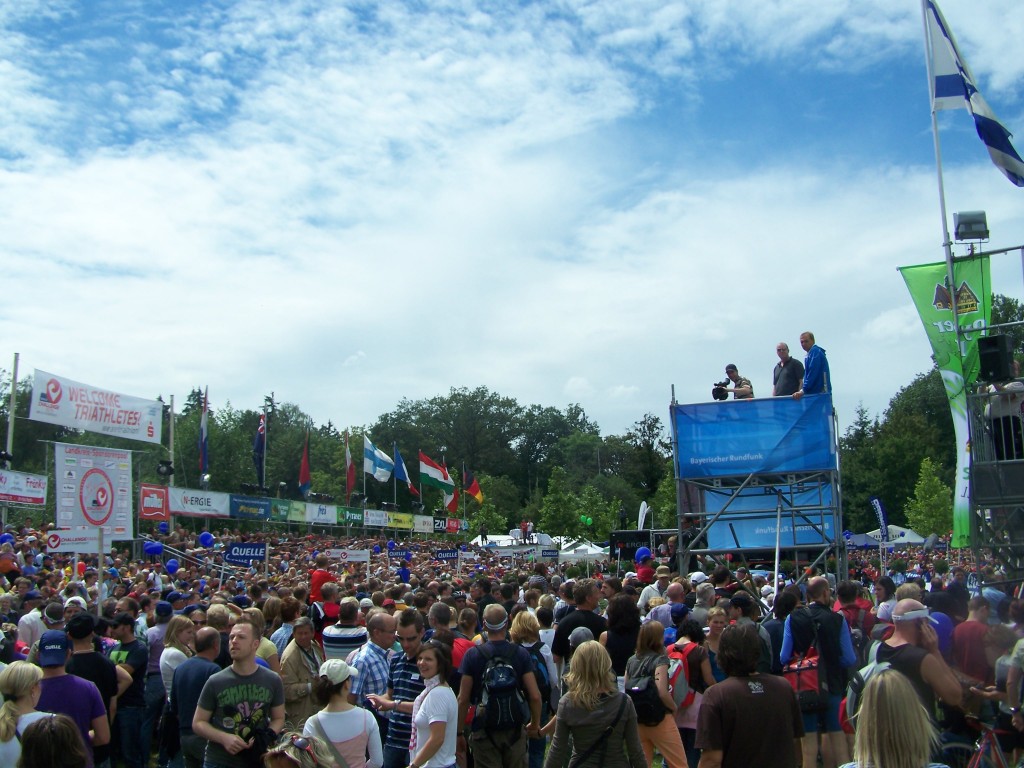 Not my placing, but rather my average heart rate on the bike! Just like Lanzarote I struggled to raise it on anything other than the climbs. Fortunately I managed to move a little faster this time! The final score was 9:22:09 for 124th overall which I’m pretty happy with. Finally I have a decent race in the bag this year and can build on it.

The day started at 4am when my homestay family woke me. Not that I was sleeping too heavily the night before a race. A nice big breakfast followed, not particularly Paleo, but then it’s been hard to be even the slightest bit strict on that out here. The important thing was it had a good mix of protein/carbs/fat though. If anything I felt a little too full! All done and off to the race venue.

Having such a generous homestay here near Roth has made my life so easy. Whilst others would have to worry about parking I was given a lift and dropped near transition. I didn’t have much to do once there so 90 minutes was plenty of time to set things up and get a couple of last minute toilet visits in.

Getting to the race. I was pleased to be feeling relaxed and having minimal race nerves. My confidence in each discipline has been quite high lately and I’ve been feeling well recovered this last week. So once in the water a brief warm-up (a bit too brief I think) to get to the start line and up near the front. When the cannon fired I went out hard, but was quick to settle into a manageable rhythm and find feet. A canal swim made drafting pretty easy.

After the first turn around things thinned a little so I kept pushing to try to move up some places. It seemed to work. With less jostling it was easier to focus on technique. Eventually I reached a point where I felt it was more efficient to draft a small group and sat in. At some point the swim started to drag and felt long. It was a relief to see one hour on the clock when I exited the water. A step in the right direction and something I hope to improve over then coming months.

Out onto the bike (transition was uneventful!) The weather was reasonably good – not too hot, but not cold. There was a strong wind though and unfortunately it was head on for what I’d been promised was the fastest part of the lap. The course is good fast in places, but with rollers and climbs that make some demands. I would say it definitely takes a strong biker to go really well here.

I’d made a plan to start out easy and build. It would be true to say I largely followed this and it seemed to work very well. What surprised me was how easy I went overall. Downloading my powertap last night only confirmed what I suspected. My average heart rate was 132 BPM during a race. Compared to either of the Australian Ironman races that’s 10 BPM lower! It’s a shame I don’t have power for them to compare. The graph below shows an averaged plot of wattage and heart rate over the course. It’s good to see consistency in effort, but a shame I couldn’t put out more on the day. I’ve seen better in training.

Part of the issue was the faster downhill sections where it was possible to spin at high speeds. They weren’t such a significant part of the course to lower the average that much. Certainly their impact on average power wasn’t that bad. I did feel that my ability to work on the flats is lacking somewhat and something to address. However on the climbs or into headwinds I go much better. It seems the additional resistance helps push me to work harder!

I stuck to a simple nutrition strategy of a Mule Bar on the hour and High 5 gels in between. Possibly benefiting from the relatively low intensity I had no digestive problems with this. I was careful to flush the food down with water to help absorption. In the cooler conditions the consequence was I peed a hell of a lot on the bike!

I’m not too disappointed with the bike time. I would have liked to have gone under 5 hours, but it wasn’t to be. My pacing worked in that my actual effort remained quite constant over the entire ride. Pleasingly I picked back a lot of places in the final 30-60km. I definitely felt stronger by the end, but with a small concern for the run.

Second transition came round faster than expected as I watched my Garmin! Not that I was complaining! I dashed through and got to try out a technique for getting the compression socks on quicker. What do you know it worked! Of course then as I’m leaving I get stuck behind a guy and girl who felt like casually walking out. It’s a race!

I settled into a very comfortable run pace. Going on perceived effort it felt like any easy training run. Checking off kilometre markers though and I was moving a little above my target pace. I eased up a little not wanting to push too hard too early. With a single lap to the marathon I knew everyone ahead of me was an additional place in the race. Great motivation as you pick people off. I was always careful to monitor my pacing though, never pushing just to gain places.

Somewhere after 10km my pace dropped off target whilst perceived effort remained the same. I stuck at it, but was afraid to push harder concerned I’d pay the price later on. I was still gaining ground on others which was important. Mentally the 30km point was the make or break section of this race. I wanted to be feeling good then.

The relatively easy pace made nutrition easy. I’d take a gel before an aid station and swig down water. I avoided all other products having found solids upset my stomach as does even the slightest hint of gas in coke. It was a good job they were handing out High 5 gels on the course as I’d severely underestimated my requirements! Whenever I spotted the Summer Fruits variety being handed out I grabbed a handful to shove in the back pockets.

Come the 30km mark (which was a little confused with some misplaced and additional distance markers) and I did feel good! I started to push things a little and work myself a bit more. Transitioning to a more noticeable breathing rate. To be honest still not that high. It was at 32km with ten to go I really picked things up. I’d planned if I felt good then I go. Add to that I knew I could set a run PB and bring the race home in close to PB time.

So I pushed and it didn’t feel bad. I’ll admit I was a little surprised! I kept things moving well and took on a final gel with 7km to go. My stomach told me that was it for food. At the higher effort I wasn’t going to absorb things to well. With around half hour to go though I figured there was enough in me to last. The next important marker was 5km I lifted the pace again aiming to finish strongly.

I’d estimate I did the final 5K in around 20 minutes so a decent closure. It took a lot of focus to maintain, but felt relatively good. I was pleased to feel like I was running properly in the last section too. Really focussing on efficiency and good form. A few more places in the bag, a sudden side-step to avoid being hit by another racer’s child near the finish line and I was done. The new run PB of 3:11 was mine and I was less than 2 minutes off my Ironman PB. Whether Roth or Busselton is a faster course will be the debate in the back of my head from now on!

Overall I’m happy with a 9:22. It was a solid, but not perfect day and I walked away from it feeling pretty good. I never felt near my limits the entire race so something I have to think about is how much harder can I go? There’s room for more effort in there for sure. On the bike I think the single week’s taper wasn’t sufficient for me to be fresh. Hopefully I’ll be able to get the heart rate and power up a little more by Ironman UK. The run was great, but could I have pushed earlier and got under 3:10?

Lots of questions and three weeks till my next chance to answer them!