Standing on the bank of the Thames, shivering in the cold morning air, I questioned the wisdom of entering a late season Ironman. Wetsuit and swim cap did nothing to warm me; if the riverside was this cold, what would the water be like? I sorely missed the warm bed I’d left a couple of hours before. Was there was a way I could graciously back out? Huddled in the start pen, it was too late.

A short delay did nothing to clear the mist, so we filed into the water ten minutes later than planned. In comparison to the bank the river felt warm. Relieved I swam to the start line and positioned myself mid field. Lacking confidence and unsure about the race I held back, unwilling to commit to my original, more aggressive plan. My mind wasn’t in the race and the conditions were doing nothing to improve it. I wanted the day over before it had even begun.

A whistle was blown, the front ranks started moving, the horn sounded in response – we were officially off. I found gaps amongst the swimmers and felt comfortable. I weaved my way from buoy to buoy, poor goggle choice and the mist conspired against me, but I was making good progress. Perhaps my doubts were unfounded. As time dragged this temporary positivity vanished, replaced with frustration and impatience, it seemed an age before the far turn point emerged from the mist.

The return leg should have been easier – we were swimming with the current. Instead I was swimming through treacle, being passed at an alarming rate, the flow of swimmers passing never stopped. I tried to dig deeper, but my lack of training shone through; I could bluff a kilometre, but 3.8K was a different matter. I plodded back to T2.

The slow pace carried into transition. A tent filled with freezing, confused triathletes struggling to warm up. Each of us putting on any extra layers we had; socks, arm warmers, a gilet – I wondered if I should have packed a jacket. I contemplated abandoning the race, but unwilling to quit my only hope was a mechanical on the bike. It was fine.

My mood lifted on the road, this season has turned cycling into a strength, I hoped it would show despite the terrible month before. The ride started well, I was rapidly up to speed and felt good. Familiar with my home course I was confident of my ability to pace it well – push a little harder on the hills and keep steady elsewhere. Fast descents gave time to recover and take in food. Everything was under control, though perhaps I pushed too much first time round, I promised to hold back on lap two.

Instead I pushed on, power was a touch lower, but it felt hard. My legs ached more than they should, was the lack of recent training about to bite? Despite the reduced output I was making progress and taking places – I may be slowing, but so was the rest of the field; all that mattered was I was slowing less. Holding pace through the second lap hit hard, I started the third in a terrible state. Negative thoughts remained – I wanted to stop, but couldn’t give up.

I struggled through the final lap. My only motivation was not being overtaken, but well aware I couldn’t raise my heart rate or match my early power it seemed inevitable. A moment out of the saddle warned me of imminent cramps; at the steepest point on Pishill I didn’t dare stand for fear I’d lock up. Unable to imagine running after this, I nursed myself back to T2. Perhaps I finally had a suitable excuse to quit.

Entering transition on auto-pilot, I changed shoes and headed out on the run. Despite everything that had gone I felt fine and had to reign myself in. I’d decided on a strategy of consistent slow pacing from the beginning. At the Outlaw my high placing in the field had spurred me on, the effort was unsustainable and ultimately I’d walked far more than planned. I didn’t want to repeat that experience, this time I’d run no faster than 5 minutes per kilometre. 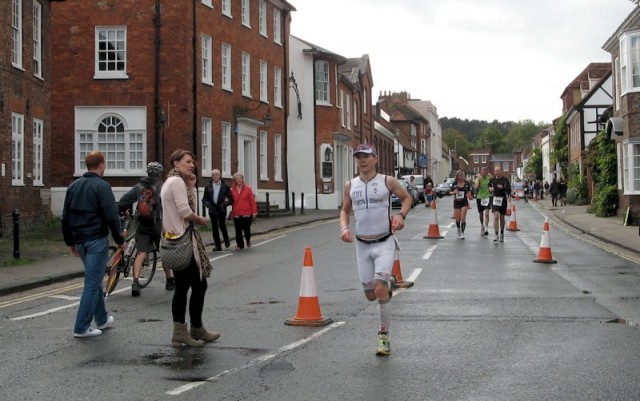 The pace felt comfortable and my doubts finally vanished – one way or another I’d complete the race. My stomach had been unsettled most of the day, sick of gels and energy drinks I decided to switch to coke. I’ve always avoided it, the slightest hint of gas upsets my stomach, but I needed fuel. It worked, I could cope with the gas and the potent surge of sugar and caffeine lifted me. I ached, it was tough work, but I no longer wanted to abandon. Steadily I progressed through the field, like the tortoise against the hare.

Starting the final lap I pushed. If I could run 4:45 minute/kilometres I could make a 3:30 marathon. The fantasy lasted two kilometres – the risk of being reduced to a walk was too great. I eased back, returning to my plan, there’d be time to push when I reached the 40.5km marker. I was disciplined, continuing my final walk break as a couple of competitors ran by; a decent finish would bring them back to me.

With two kilometres to go I lifted the pace. It wasn’t spectacular, but I wasn’t slowing as much as the athletes around me. I soon caught one of my competitors, but the other was nowhere in sight. Forgetting him I maintained the pressure until I entered the finishing shoot. Just as I took the turn that second competitor darted around me having been sent the wrong way; I pondered a sprint, but lacked the competitive urge – I just wanted to finish. It transpired he was in my age group and bumped me out of fourth place!

Finally the race was over. The pain had stopped and despite all the doubts I’d finished. A month of poor preparation took its toll, but in the circumstances I’d performed well. Most importantly I’d paced a more respectable marathon, taking a step towards my previous form. I’m glad I never succumbed to the temptation to quit.

The truth is I had a bad race, preparation was poor and I was off focus. I know I’m capable of much better, but I’ve consistently failed to deliver. I can’t keep turning out mediocre race performances. This year has been productive in many areas of my life, but I’ve been coasting in training, relying on years of progress to shore up my results. I suffered in the swim because I’ve not trained; my bike fitness may be good, but once again I arrived poorly prepared; and I can make excuses about run injuries, but need to do the work to fully overcome them. I won’t take these excuses into next year. No more casual racing.

Challenge Henley was a superb event. I just need to be a better athlete. There are many positives from the day and signs of returning form, but equally much frustration as I’m still not there.